2018: The Year of Global Creolization

Well, it's the end of the yet another massively disorienting year. I want to leave you with a nice big, optimistic (for most of you) thought to mull over the break before I return in January.

In 2018, we'll be entering the final, hardest-fought fourth phase of globalization: global creolization. The two-year transition we've just experienced is remarkable primarily for one thing: the degree to which the massive global ethnonationalist reaction has largely failed to slow or halt the process of continued global political, economic, and cultural integration. Powerful as nationalist ideologues and their angry mobs are, for better or worse, they seem incapable of slowing the juggernaut significantly. Much to my own surprise, given my dark expectations at the beginning of the year, ethnonationalists around the world have largely failed to produce anything beyond cosmetic, theatrical gestures in service of their declared agendas. Two years in, it is becoming clear that the global reactionary movement is primarily an aesthetic reaction, trafficking in symbols rather than substance. Of course, they've won some minor battles, but I find myself ending the year on a much more cheerful mood than I began it, with far greater faith in a globalized, cosmopolitan future. The tide appears to have turned.

So what's going on? Well, I have a 2x2 and an explanation for you. 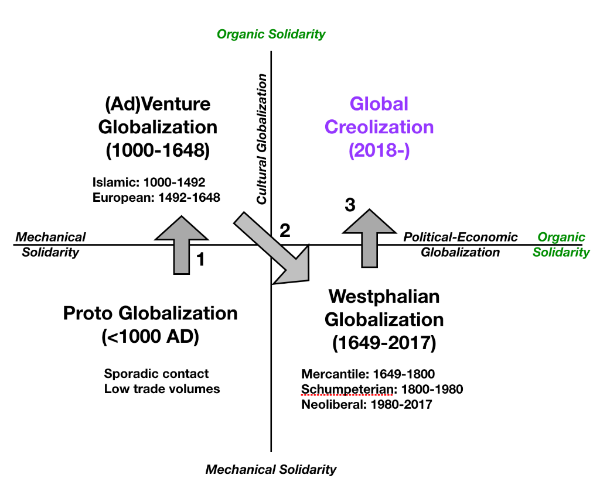 We need to apply two well-known ideas together to understand my 4-phase/3-transition model of globalization, one from linguistic anthropology, and the other from sociology.

Linguistic anthropologists distinguish between two phases of language evolution due to cultural contact. In the early phase, a pidgin forms. A pidgin is a zombie language, a clumsy mashup that lacks the organic coherence and harmonized aesthetics of a real language. In a generation or two, however, as cultural contact is continued, a creole appears, creating an integrated language with a living energy to it, an _élan vital _(that might be favorite phrase of the year). You can broaden the concept beyond language to things like fusion cuisine. Indo-Chinese fusion is a mature, creolized cuisine (I grew up with such classics as Hakka Chowmein and Gobi Manchurian) because it has several hundred years of history behind it. But despite their strong similarities, I have yet to eat anything that rises above the level of a pidgin in Indo-Mexican cuisine. That's because the two cuisines have only recently collided.

The sociological concept is the classic mechanical versus organic solidarity, due to Emile Durkheim. Mechanical solidarity is how peoples who share a culture (Arabs for example) form supra-tribal polities. Organic solidarity, which requires impersonal institutions and strong division of labor/specialization, is how people who do not share a culture, but have specialized in complementary ways that foster productive interdependence, form supra-tribal polities.

Here's how you put the two ideas together: when a condition of organic solidarity persists for long enough, entirely new cultures, with sum-greater-than-parts features, can emerge through creolization.

What starts as impersonal institutions that juxtapose mutually alien elements ends as a new pattern of relationships, with co-evolved features. The Afro-Indian culture of the Caribbean is an example. Even if you temporarily erect walls between parts of a creolizing, organic-solidarity polity, or break connections, the process of co-adaptation is irreversible once it starts. I think of this process of creolization as a human version of annealing. Just as cycles of heating and cooling change the properties of a metal for the better (brittleness gets replaced by toughness for example), cultures going through the ups and downs of shared narratives anneal into resilient new states.

This explains why the global ethnonationalist reaction has been primarily an aesthetic one. To natural conservatives, a pidgin is an aesthetically incoherent, messy, dissonant, repulsive state, one that provokes a disgust reaction. One to which a purer, uncontaminated isolated culture is clearly preferable. But subconsciously, reactionaries tend to recognize the inevitable future: the incoherence of a pidgin will, if allowed to persist, turn into the strange alien beauty of a new creole. A cultural entity that will do more than compete for hearts and minds with the older cultures it emerged from: it is almost certain to defeat them. In a global culture war, time is on the side of the creoles, despite their fragile young state. The longer a culture war lasts, the more the advantage swings to favor the creoles.

Think of pidgins as the ugly ducklings, and creoles as the adult swans. The essence of the global reaction is this: kill this quickly, while it is still ugly and we can appeal to natural instincts of revulsion in minds with conservative-aesthetic instincts. Once creolization is underway, reactionaries may win occasional battles, but the war is lost.

One particularly ironic sign of the state of affairs leaps out at me: in online reactionary cultures in the West, anime avatars are popular. Anime is among the more effective examples of a bit of creolized culture, a successful combination of Western and Japanese art forms. While more purist iconography (such as Greek statue heads) are also popular, I suspect the identity-representation war has been won by cosmopolitanism.

What larger lesson can we draw from this?

The big thought is this: you can think of globalization as a four-phase process, and we're entering the last phase, global creolization (I'll let you mull the previous stages and transitions with the help of the 2x2). It is a condition where the transition from mechanical to organic solidarity on both political-economic (x-axis) and cultural (y-axis) fronts has progressed far enough that cultural creolization has started to happen in earnest. Ugly-duckling pidgin, zombie cosmopolitanism is starting to get supplanted by creolized, living-swan cosmopolitanism.

The thought hit me after watching a bunch of Hallmark Christmas movies and The Last Jedi in the last couple of weeks.

Hallmark Christmas movies are about as reactionary as it possible to get while remaining charming and inoffensive. They are good for what they are in a dead-end, comfort-food way, with nowhere to go, no new forms to evolve into. This Slate article kinda gets at the subtext and background. It is rather overwrought in its Official Liberal Agonizing (it is perfectly possible to enjoy Hallmark movies as a cultural "foreigner" to the purist, fantasy-throwback polities represented, without reading them as Trumpist conspiracy cultural products) but the core point is valid: it represents the sort of thing reactionaries are fighting for. The cultural space they see threatened by the so-called "War on Christmas" in the US. Unlike many liberals, I don't think the war is entirely imaginary and in the heads of conservatives, or made up by Fox news.

By contrast, The Last Jedi struck me as a pretty lousy movie. But lousy in an interesting and promising way with plenty of places to go/evolve into. It is an early, brittle, pidgin cultural product of globalization. As I tweeted, the movie is like an enterprise software product: an awkward zombie assemblage of many conflicting cultural patterns, based on trying to meet expectations from many different parties, that have not yet gelled. 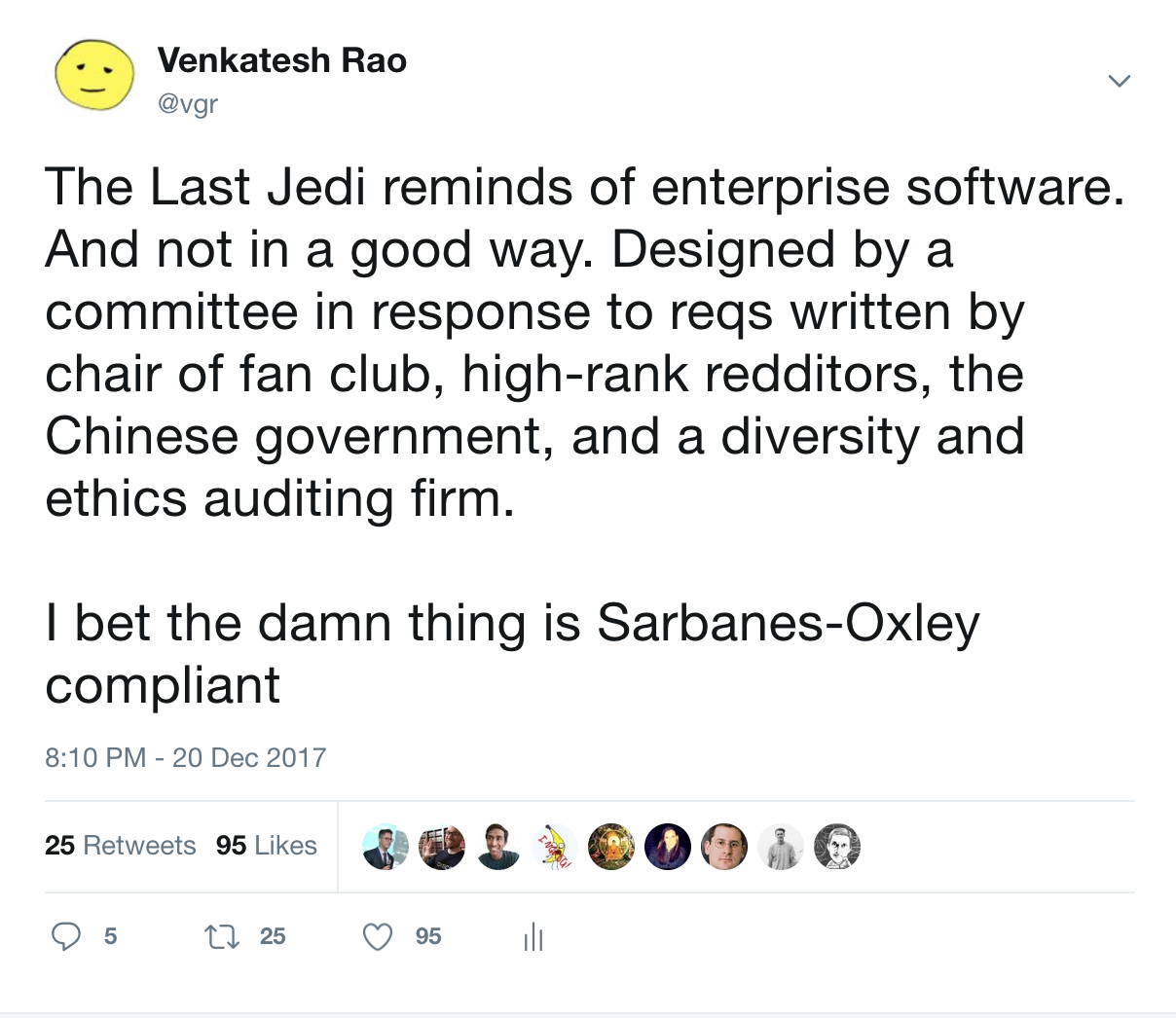 But viewed alongside more successful attempts at cultural products with globalized sensibilities, you can see the progress of creolization and why it might be truly alarming to conservatives. For example, I thought the all-women Ghostbusters reboot was genuinely funny, not just liberal-reviewers-doth-protest-too-much funny. Another interesting creole movie was the Korean Snowpiercer (clearly Christian in its themes, and far more entertaining than normal Christmas movies). There are many other movies that are enjoyable, and not just because SJWs are declaring them to be officially good.

Both The Last Jedi and Ghostbusters (among many others) provoked a very predictable critical response. Anxious liberals, desperate to claim cultural victories, overstated the quality of these pidgin efforts, and declared them full-blown creolized artistic successes, wins for Team Cosmopolitan Anti-Trump SJWs. At the same time, reactionaries rushed to criticize the visible clumsiness, overly self-conscious representation politics, and clear elements of artistic failure, a little too eagerly, a little too anxiously.

Maybe I was reading too much into online conversations, but I thought I detected an undercurrent of real anxiety: these early pidgin movies seem set to grow into a global, creolized cultural space that will blow Hallmark Christmas movies (and their ethnonationalist counterparts in the rest of the world -- Bollywood for example has its own similar genre of movies) out of the water by the end of the decade.

So 2018 is going to be interesting, as these culture wars continue to unfold, along with more serious political, economic, and perhaps even military wars. But unlike December last year, the contest is much more even.

Anyway, Merry Christmas and Happy New Year to all you cosmopolitans, and Happy Holidays to all you ethnonationalists, I'll see you in 2018.

PS: I've decided to drop the whole interactive-challenge thing I've been trying for the last couple of weeks. It's too much work to process the responses, interesting though they are.

PPS: If you're looking for an archive of newsletters through the year, here you go.

PPPS: I was supposed to publish the Season 2 essay collection this year, but the world got too complicated to keep up with and analyze at that level. I think I'll be able to get Season 2 out in 2018 though.