A Cambrian Explosion of Consensual Realities

Software has a way of turning abstruse metaphysical questions into practical ones. One such metaphysical question is that of consensual reality. The phenomenon that is Pokemon Go has suddenly turned this question into a very practical one. The game represents the beginning of a rapid ramp-up of our ability to create and inhabit our own realities -- global, not inside-of-my-head sized or village-sized --  in the company of those we opt to share them with. Capitalists and communists disagreeing about the nature of the world in the twentieth century was a global collision of just two consensus realities. Back then, consensus realities were a read-only game for most people. It was expensive to create one. You had to build impressive buildings, give speeches about values, own newspapers, hire goons to beat up opponents, declare manifestos, and so forth. We are now entering a read/write era of consensus realities. Our ability to disagree about the nature of our world, at an extremely fine-grained and visceral level, is about to explode. Fortunately, the cost of disagreement is also crashing, making it overall a very good thing. 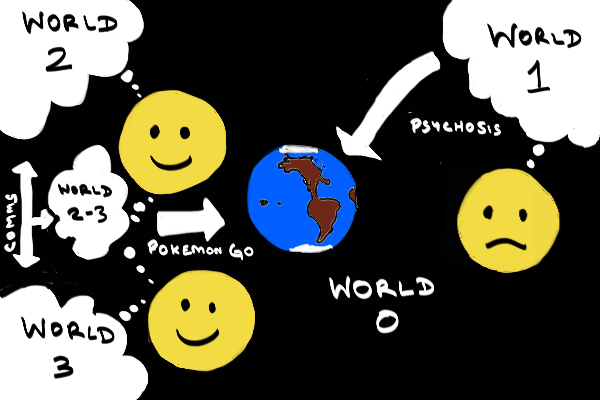 1/ Until recently, the question of the nature of reality has been a matter for philosophers, and they have treated it through a few basic questions.

2/ Bear with me while I lay some philosophical groundwork in a few points before diving into things like Pokemon Go.

3/ Is there an objective reality? Entire religions have forked apart by offering different answers to this question, and philosophers have long pondered cogito ergo sum

5/ That question gets us to other minds, philosophical zombies, and the inverted spectrum.

6/ You can also sneak in speculative layers between objective and subjective using brains-in-vats, ancestor simulations, and allegories about people sitting around in caves.

7/ Whether or not we experience reality (assuming it exists) the same way, it seems like you (assuming you exist) and I manage to agree quite a lot about it.

8/ This observation gets us to consensus realities, which includes large scale social realities like money and nations that only have an existence and meaning to the extent people agree they do.

9/ There are social realities that are institutional (Gesellschaft), like "United States", or "Google," which indirectly mediate consensus realities.

10/ ...And there are social realities that emerge from direct community relationships (Gemeinschaft) like "tech scene," and other egregores.

11/ Much of the history of the world can be understood as "merge conflicts" between consensus realities of different groups that resist being forged into a bigger consensus.

12/ Politics can be understood as groups accusing each other of harboring or fostering false consciousness states less "real" than their respective internal consensus realities.

13/ Historically, both individual and consensus realities have been mostly read-only for most people, rather than read/write.

14/ If you were an emperor, with a bunch of priests and soldiers, and enough money to pay them to whip slaves into building pyramids, you could write consensus reality at scale.

15/ Otherwise, at best, you could mostly only read consensus reality. Writing one, especially one that conflicted with the Pharaoh's, was limited to daydreaming in solitude or whispering in one ear at a time.

16/ Writing and printing began to change that. People who have read the same book can live in a slightly different shared reality than those who have not, forming an imagined community.

18/ Textually, we're already way past a handful of canonical consensus realities, and now inhabit a vast number of overlapping ones of various sizes and geographic extents.

19/ Until now though, all these media had to compete with your immediate physical environment -- World 0 in the cartoon above -- to create a social reality that was more than textual.

20/ A television, for instance, must rely on your brain's ability to tune out the environment around its edges and voluntarily "enter" the world it presents.

21/ Until recently, however, actually writing consensus reality at the low, machine-code level of photons entering eyeballs, without competing with the material environment, was impossible.

22/ Things like physical signage cannot "augment" reality without altering it physically by monopolizing it. A hiking trail must be carved into a mountainside.

23/ Augmented Reality (AR) is special in that it can freely remix your immediate physical environment with arbitrary digital superpositions, without the need to monopolize atoms.

24/ One hard part of this problem has already almost been solved. Google Glass showed us a glimpse of the future, and Magic Leap and HoloLens are inventing it.

25/ What Pokemon Go does is show us how to solve the other hard part of this problem: how to program the social consensus to do interesting things with this ability.

26/ The hardware (a regular phone) and software (primitive animation and a camera overlay view) parts are primitive. Magic Leap and HoloLens will obviously offer much more.

27/ But what's noteworthy is the massive, large-scale alteration in visible behavior, explainable only in terms of what is in effect, a mass collective psychosis.

28/ The only way to explain what you're seeing in parks and other public places is that large numbers of people are seeing cartoon creatures you're not. If you didn't know this, it would seem like the world has gone insane.

29/ Do Pokemon creatures actually inhabit these physical locations? Arguably yes. We are not talking about figurative differences in perception here.

29/ This is NOT the same as a poor laborer, a fat plutocrat in a top hat, and a white-collar accountant "seeing" the same street differently in 1905 depending on their political views.

30/ That kind of political commentary was figurative, and meant to make a philosophical point. With Pokemon Go, physical perceptions and reactions can differ strongly.

31/ Increasingly, the best way to understand the physical world is as an address space into which an arbitrary number of consensus realities can be co-extensively projected.

32/ One person projecting their internal reality onto the world is psychosis. A government projecting street names and addresses is power talking.

34/ In fact, the number of possible individual and consensus realities can be effectively infinite, since we'll be able to switch among as many as we like: game reality, work reality, safety reality, data reality.

35/ We are already laying the groundwork for such a world. Mongolia for instance, has just adopted a fascinating addressing scheme that is closer to a computer's memory map than to a postal system.

37/ And don't forget our artificial friends. Every autonomous vehicle, smart home, and smart device will be inhabiting its own set of individual and consensus realities.

38/ David Gelernter scratched the surface of this idea in his 1993 book Mirror Worlds. A half-generation ago, The Matrix foreshadowed what was going to happen.

39/ In Rainbow's End (2007), science-fiction author Vernor Vinge imagined a world strongly shaped by and for the consensual realities projected onto it (why paint a wall when you can project any color you like onto it?).

40/ The sheer speed with which cyber realities are leaking out into the material world, dissolving digital dualism, and augmenting "reality" (what is ithat again?) has certainly taken me off guard.

41/ Predictably, some see what's happening in terms of power-grabbing by powerful neoliberal corporations destroying communities, and solidarity based on traditional consensus realities programmed by a privileged few with buildings and books.

42/ But this is not pyramid-building, stone-tablet religiosity, books, or television. There's just too much authoring work to be done here for small groups in corporations like Nintendo to take on.

43/ Whether or not the creators want to cede power, AR will have to be far more of a read/write, democratic tool of consensus-reality creation than anything that came before.

44/ Already there are signs of the coming democratic potential. Legitimate business opportunities are already opening up for some, new criminal possibilities for others.

45/ This particular game may came and go as a fad, but the genie that cautiously peeked out of the bottle with Foursquare has now entirely left the bottle.

46/ A Cambrian explosion of consensus realities is deeply threatening to those who enjoyed control over the scarce resources necessary to create them.

47/ Among the most revealing episodes so far have been the complaints about people trying to catch Pokemon at solemn events like funerals.

48/ This of course, is not new behavior. People surreptitiously checked email before at solemn events. The trope of enemies of the deceased plotting in whispers at funerals has been with us forever.

49/ If the only thing preserving the sacredness of a consensus reality preferred by the powerful is lack of technological ability to inhabit a different one, how sacred was it really in the first place?

50/ Authoritarians have always tried to pretend that masks hiding fear, indifference, or disempowerment were always genuine expressions of respect, admiration or willing participation in their declared sacred realities.

51/ A decade ago, a small feature of the consensus realities owned by the powerful quietly died: the ability of powerful people to make weaker people wait (often conveniently read as the weak "showing respect").

52/ With a smartphone, you never really have to wait for anyone or anything. You can simply inhabit a different reality for a while. The smartphone desycnronized a few billion timelines.

53/ We are visual creatures, more consciously sensitive to changes in space than in time. AR is going to desynchronize space for us, just as the smartphone desynchronized time.

54/ Now you no longer have to "wait" in space on incumbent occupations for many things. You can add a mustache or funny hat to the guy you're video-chatting with. You can see a Pokemon creature in space controlled by others.

55/ Instead of a dozen powerful consensus realities competing to synchronize 7 billion minds in time and space, there can now be as many as we care to create. And this is a good thing.