In Silicon Valley you are either a missionary or pretending to be one. There is almost no room for openly mercenary types. Even consultants,  almost by definition mercenary types (and rare in tech relative to the mainstream economy), have to at least affect true belief in ideals. Until recently, I used to enjoy the thought that I was one of the rare openly mercenary consultant types managing to stay afloat in the tech world, capable of working with almost anyone, no matter what their beliefs. But last week, I discovered that perhaps I am not as mercenary as I think. The news of legendary Valley thought leader Peter Thiel signing up to support Donald Trump made me realize that, push come to shove, I do stand for and against certain things. The thought made me reflect on the dynamics of how people take their cues from each other in tech in general (a topic that I am researching right now), and what to think of Peter Thiel's move in particular. 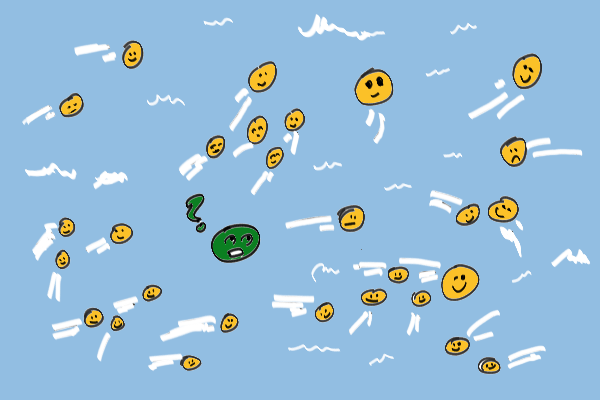 Leading and Following in Silicon Valley. My drawing is supposed to resemble wakes of boats seen from the air.

1/ When you first get acculturated to Silicon Valley as a young, green Citizen of Tech, you notice a striking thing: despite being a highly social culture, it is highly individualistic.

2/ If you're used to other cultures, where the first order of business is figuring out which group to affiliate with, and which leader to line up behind, you're in for a shock. Tech doesn't work that way.

3/ Compared to the rigid hierarchies and groupthink of say, the political scene of Washington, DC, tech is full of people thinking for themselves. People follow the beats of a thousand different drums.

4/ Whether you are good at it or not, credibility and influence in the tech world come from demonstrating the courage to think for yourself, rather than merely skill at independent thinking.

5/ You will of course suffer reputation loss if your original thinking is weak or flawed, but you will suffer reputation bankruptcy if you're viewed as a mere signal booster, pure bullshitter, or yes-man/yes-woman.

6/ This is of course, merely a consequence of the nature of technological work itself. Unthinking support is of little value. Mindless repetition is for robots. Bullshitting doesn't create running code. You primarily add value through originality.

7/ To the extent there is significant commonality in the world views of tech citizens, it comes disproportionately from earned trust, actual mutual persuasion, and the inevitable shared blindspots.

8/ There isn't a strong culture of uncritically falling in line behind powerful leaders. There is no "party line" to toe, no "right people" to follow and "wrong people" to shun. In elections, there is no "tech vote" you can systematically court through tech leaders.

9/ The patterns of leading and following combine elements of tribalism, individualism, mass movements, and organized corporate/bureaucratic coordination in ways that appear to defy the laws of sociology.

10/ In most cultures for instance, you cannot simultaneously have the structure of a disciplined and skilled organization and the raw energy of a mob working for you. In tech, you can.

11/ Being a leader in tech is two jobs, not one. Like leaders elsewhere, tech leaders have to inspire trust and confidence inside the organizations they lead.

12/ Far more than leaders elsewhere, however, leaders in tech also have to inspire trust and confidence in the ecosystems their organizations, shape, influence, and draw from.

13/ From open-source projects and developer ecosystems, to raw support and goodwill for enormously risky startup efforts, the local external environment is a critical success factor in the tech economy.

14/ Oddly enough, the dynamics of leading and following in tech are not based on intellectual brilliance or technical genius, as outsiders often assume. The smartest do not necessarily win in tech.

15/ They are based instead, on ethics. Lived ethics in the form of principles that help navigate the turbulence and chaos of life on the tech frontier. This is as true of technical decisions as it is of management decisions.

16/ One clear sign of this: the words of leaders in most cultures are dismissed as empty rhetoric and forgotten immediately. Only accidental and unintentionally revealing slips are newsworthy.

17/ In tech, on the other hand, aphorisms are the intellectual currency of a lived ecosystem of ethics. Tech is full of people sincerely attempting to offer and accept moral wisdom from each other, on every subject from fund-raising to choice of programming language.

18/ From Andy Grove's "Only the paranoid succeed" to Steve Jobs' "Why join the navy when you can be a pirate?" to Donald Knuth's "Premature optimization is the root of all evil," the words of leaders in tech actually make a difference.

19/ They turn into memes, and form an entire shorthand memeplex vocabulary of decision-making, values signaling and wisdom-sharing that fuels real conversations. Tech people quote each other all the time.

20/ Compared to the hundreds of bits of aphoristic wisdom that drive tech, other leadership cultures are veritable deserts of cynicism about "mere words." Only things like money, connections and formal authority matter.

21/ And as I noted, almost all the memes that gain currency in tech have to do with virtues and ethics, not intelligence or strategic insight. The sincerity with which techies approach ethics often strikes outsiders as either naive or disingenuous.

22/ But above all, the culture of leading and following in tech is based on taking words and thoughts seriously. On actually attempting to change minds with words instead of merely finding the like-minded.

23/ Despite the apparently strident surface culture of "doerism," tech is actually a strongly intellectual culture. Insane energy is devoted to thinking clearly and effectively, in principled and serious ways, about complex things.

24/ Discourses in tech can be, and frequently are, wrong, confused, lacking in compassion, rife with prejudices and biases, and tone-deaf to outside concerns.

25/ But what they almost never are is insincere bullshit. Right or wrong, words in tech at least try to get at truth in some sense of the word. Even if it is a very contrarian sense.

26/ What sets the tech world apart is not that the people are smarter, but that they care more about the truth, whatever that might mean to different people.

27/ The tech world is not marked by indifference to truth and falsity in service of entirely self-serving goals. Naked pandering to baser instincts fares much worse in tech than in other cultures. The bullshit levels are markedly lower.

28/ I have no inside knowledge or informed opinion on Peter Thiel's endorsement of Trump. Presumably, as a brilliant guy, he has his mix of ideological, strategic and pragmatic reasons.

29/ In a world of contrarians, when a guy particularly known for contrarianism makes such a visible political move, the temptation is to analyze it in terms of genius thinking ("he's smarter than me, so his reasoning must be deeper and better") rather than values.

30/ But as a random citizen of tech, hustling for interesting work, and contributing whatever I can to a culture that has given me a lot, this is one cue I am not going to be taking from him.

31/ The essence of tech culture is a unique brand of intellectualism, and ethical sincerity in whatever you do. It's a culture entirely at odd with insincere anti-intellectual bullshitting designed to ride a wave of populist anger to political success.

32/ It does not matter, in the end, that the populist bullshitting in the air is justified as counter-programming of the establishment bullshit it is battling. Tech culture aspires to be anti-bullshit, whatever the flavor.

33/ Even if you are a consequentialist -- someone who believes the ends justify the means -- getting behind something like the Trump campaign strikes me as a betrayal of the most powerful values of the tech world.

34/ It is tempting to overthink something like the rise of Trump, and the support of people like Thiel. It's easy to get seduced by the game of "decompiling" the Trump persuasion code. The sheer intricacy of the puzzle is catnip to us OCD techies.

35/ There is a reason techies have been particularly fascinated by Dilbert creator Scott Adams' "Master Persuader" analysis of Trump's supposed genius. I find it unconvincing, but that's besides the point.

36/ Once you decide what you stand for, the genius, or lack of it, in the political movements of those who stand for the opposite is irrelevant. Principled opposition is not affected by calculations around winning and losing, or the impressive intricacy of thought and action on the other side.

37/ No doubt, in the coming months, other tech leaders will voice political opinions. And there will be the temptation to nerd out, trying to figure out how this or that genius came to their particular conclusion.

38/ But it is important not to lose sight of the main, simple thing: for all its reliance on technical and business genius, the cultural glue that defines tech is a sincere concern with truth and values, and an aversion to bullshit of any sort, populist or establishment.

39/ So whether you are a US citizen who will be voting, or a foreign observer of tech who will merely be indirectly affected by the outcome of the election, don't let the nerd-puzzle that is the rise of Trump subvert your moral reasoning challenge, which is much simpler.

40/ Whatever you conclude, and whomever you decide to support, make an effort to get there with sincere moral reasoning. Just because the broader environment is being currently shaped by bullshit doesn't mean your thinking has to be.