Are You Graph Garbage?

One of the harsh realities of digital modernity is the extreme consequences of being left behind in a specific way: becoming graph garbage. You're graph garbage if you're not strongly connected to the consequential bits of the social graph relevant to your marketable skills. Why? Because the "stream" where economically valuable things happen is not a material environment like geography. It's an environment created by exclusionary tribal connection patterns of humans. Here's how to tell if you're graph garbage, and what to do about it. 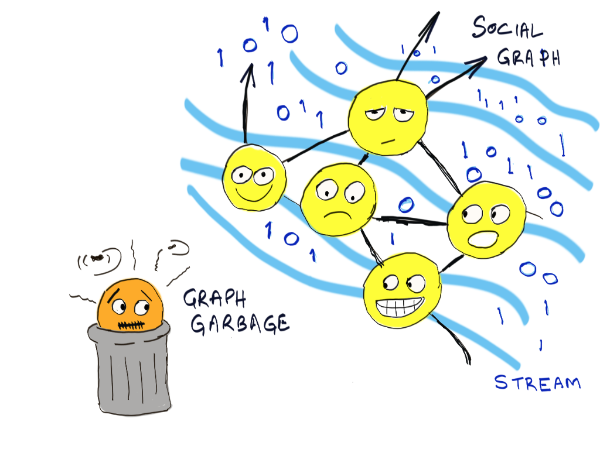 1/ In computer science, "garbage collection" is the process of clearing out memory occupied by stuff that's no longer in use.

2/ One way to do that is to look for isolated bits of the "social graph" of things in memory and remove bits not interacting with the ongoing stream of processing activity.

3/ The metaphor for humans is very compelling: if you're not connected and in the "happening" part of the stream, you're headed for the graph garbage can.

4/ A great illustration of this phenomenon is the short story "The Martyr's Corner by R. K. Narayan, featuring a street vendor, Rama.

5/ Rama has a thriving business selling snacks, and enjoys a high reputation with his customers, moviegoers at a nearby theater.

6/ One day a political scuffle in the neighborhood results in police firing, and several deaths at Rama's street corner.

7/ Rama loses his prime spot in a high-foot-traffic corner, which is taken over to build a martyr's monument.

8/ He's forced to move his snack stall down the street, where his business suffers, loses reputation, withers and dies. He's out of the street "stream" and in the social graph garbage can.

9/ Ironically, at the time of this writing, the Wikipedia entry on the short story is marked as an orphan page: the Wikipedia version of "garbage"

10/ In meatspace, we know this as the "it's who you know, not what you know" heuristic, and is an overly cynical observation.

11/ In meatspace, you can be graph garbage and still make it because valuable knowledge is only weakly connected to social capital.

12/ You can access libraries and other impersonal institutions and make your own way if you're not connected to the right people.

13/ Ironically, even though online impersonal knowledge resources like Khan Academy are more accessible, "who you know" matters more online, not less.

14/ This is because a huge amount of the most valuable information is unfortunately only available in a tacit, embodied form within influential parts of the social graph.

15/ You cannot access this information by using the Internet in read-only mode. You have to be in read/write mode and making connections to people, not just information.

16/ You also have to navigate the highly tribalized world of online social loyalties, and an entire universe of us vs them rivalries and secret handshakes.

17/ While the most thoughtful online communities consciously attempt to combat and mitigate parochial tribalism and maintain openness, that is the exception.

18/ In other words, almost all the economically valuable information online exists in informal and highly personal institutions run along tribal lines.

20/ The unfortunate truth is that the stream disempowers those not deeply, and tribally, enmeshed in it.

21/ Often this requires at least pretending to have swallowed one red pill or the other, though there is a minority of high-value grey pill un-tribes out there (see 1/22/16 newsletter)

22/ The unfinished challenge of online culture creation is to synthesize the social power of tribes with the inclusion and openness of impersonal institutions.

23/ But until that happens, you have to learn to survive by your wits and not become graph garbage.

24/ How do you know you're graph garbage? The test is when you get high-leverage information of economic value, and how.

25/ People powerfully immersed in the right stream for their needs get information while it is being created, and there is still economic leverage to be realized from using it.

26/ People outside the stream in graph garbage cans get information exhaust: the stuff that's left after all leverage has been consumed via stream activity.

27/ This is "garbage" content for "garbage" people: it may be pleasant and stimulating to consume, but has little economic leverage.

28/ One sign that you're consuming information exhaust rather than live and high-leverage information, ironically, is the degree of polish and packaging.

29/ If you get a piece of valuable information in a noisy, messy form from a conversation among movers and shakers on Twitter, you're ahead of the curve.

30/ If you get that same information in polished, editorialized, institutionally digested and fact-checked form from The Economist, the game is already over.

31/ You can still learn from it, but you'll only be able to catch up from behind with it, not get ahead.

32/ If information looks like garbage, there's a chance it isn't. If it doesn't look like garbage, you can be fairly sure it is garbage in the computing sense.

34/ So unless you're certain you're a unique genius who can go off and do great things in isolation, maintain high situation awareness of your information environment.

35/ In many ways, the current conversation on economic inequality is just a symptom. The deeper underlying phenomenon is unequal participation in the stream.

35/ If you can stay immersed in the right stream, and stay out of the graph garbage can, you'll gain social mobility and eventually derive positive economic returns too.

36/ If you end up in the graph garbage can, you'll rapidly become irrelevant and start hemorrhaging economic capital. You'd better have a lot. As they say, the easiest way to make a million dollars is to start with two million and lose one.