Growing up, I turned atheist the very first time I considered religion seriously. It was of course, the naive atheism of a nerdy, science-and-tech-obsessed pre-teen, but even as my thinking and emotions underlying the position have gotten more sophisticated over the years, the position itself has only strengthened. Any time I encountered an issue that made me revisit the idea of religion, I always found a more powerfully satisfying (both emotionally and intellectually) resolution, or even better, a more fertile direction of further questioning, outside of religion. I'm not a militant, performing atheist like Richard Dawkins, and am willing to go through the motions of religious observances to avoid hurting others, but basically I stopped taking religion seriously by age 12, except as a social, cultural, literary and political phenomenon. For much of my life so far, my source of resolutions of issues that are prima facie religious in conventional frames, has been science. Increasingly though, resolutions to and/or fertile new directions in, seemingly religious questions can be found through software and data. This might be the most important cultural megatrend of our time. 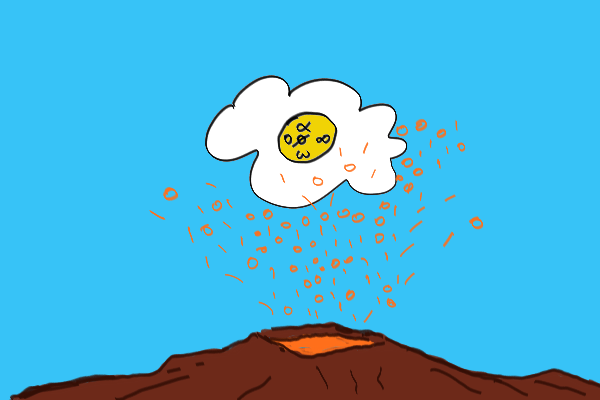 Bits from the depths of hell eating alpha, omega, zero, infinity and null.

1/ It can be comforting to believe that there is no conflict between science and religion, or make clever remarks like "ah, science is also a religion" but history belies this myth.

3/ Despite some similarity in foundational assumptions at a metaphysical level, the empirical impact of science and religion through history has been different.

4/ Science has tended to disrupt society in irreversible ways as it has gained momentum since 1800. Religion has tended to either stabilize it, or drive zero-sum swings among competing faiths.

5/ Science directly threatens religion by uncovering new facts that must be incorporated into narratives. Like figuring out the age of the earth or uncovering fossils.

6/ Each uncomfortable or awkward accommodation of a new fact makes the narrative more fragile, like software being patched, making it more likely that marginal believers will disbelieve it.

7/ It also indirectly threatens religion by fueling technological developments that give humans agency over matters previous considered a matter of divine agency. Modern medicine is an example.

8/ But perhaps most importantly, both science and technology threaten our sense of our own importance in the larger scheme of things, usually called anthropocentrism.

9/ As you would predict from disruption theory, even as science and technology have disrupted religion over centuries, religiosity has both declined and retreated "upmarket."

11/ "Downmarket" religion tends to literalist beliefs about the world and naive expectations about interventionist divine agency, both of which can be broadly falsified by changes in technologically evolving society.

14/ These are, sadly, historically familiar types of events at the intersection of politically charged debates around race relations, gun control, and policing practices in the US.

15/ These debates today have the structure of moral-religious wars, as always, even if they are not couched in literally religious terms the way they would have been a century ago.

16/ Current events seem like a weak echo of 1968, when far more massive race-based conflict was tearing the US apart.

17/ One of the many things that have changed between then and now is of course, the much-noted role played by the proliferation of smartphones with video cameras.

18/ Many have made the point that the world only seems more violent and conflict-ridden even as it has actually gotten less so, because information flows more easily and openly.

19/ But more information does not mean debates are going to be more informed until debate structures adapt to an information-rich environment.

20/ A "religious" debate, whether it is Christianity versus Islam, Mac vs. PC, or black communities versus white-dominated civic institutions, is conducted in a certain way that is new-information-resistant by default and design. Religious debates are designed for information scarcity.

21/ If one side has a clear advantage to gain from a piece of information, the other side has a clear incentive to discredit it. This makes competing narratives more noisy and bullshit-ridden.

22/ More subtly, there are many kinds of new information that both sides have an incentive to resist even discovering, through shared reluctance to ask certain questions.

23/ Such shared reluctance among adversaries to ask certain questions even when they go from "impossible to answer" to "maybe possible" is a kind of cooperative ignorance.

24/ One example (not a perfect one admittedly) in the current debate is information about the link between criminality (the legitimate focus of policing) and racial bias.

25/ It is convenient for SOME who support policing establishments to anchor their narrative in the idea that there is no racism, just an unfair perception of legitimate crime-fighting.

26/ It is convenient for SOME who support the movements like Black Lives Matter to believe that questions of criminality can be easily decoupled from the thesis that racism is endemic in policing practices.

27/ To the extent that both sides see the debate as unfairly rigged against them, and inclined to give themselves the benefit of any doubt, there's an incentive against asking hard questions that resolve favorably co-opted ambiguities in unpredictable ways.

28/ In this case, what's the actual link? This paper looks at data using Bayesian analysis to conclude that local race-based criminality patterns do NOT fully explain indicators of racial bias.

29/ Whether or not the analysis in this paper checks out, or whether it is supported by future work, the point is, data and software have turned a "religious" question into a "scientific" one.

30/ It is not surprising that such statistics-based social science research, enabled by computers, is now under increasing scrutiny, and there is a multi-level reproducibility crisis unfolding.

31/ These methodological issues have ALWAYS existed in science, so why are they under particular scrutiny now? And are social psychologists uniquely incompetent or driven by bad faith?

32/ One contributing factor: due to computational leverage, they now threaten entrenched identities, and debates with a "religious" structure current combatants want to preserve.

33/ This is true even if prevailing debate structures lead to conflict-ridden gridlock that causes much misery. I briefly analyzed the reasons from the perspective of ritualized games here.

34/ If you think this process will stop at debates that are merely structurally similar to truly religious ones, think again. We can increasingly look at many morally loaded questions with data and software-based analysis.

36/ Any one study or even a whole line of study may be discredited, the results may be very, very noisy, and accumulate precious nuggets of truth very slowly, with many backslidings.

37/ But the historical pattern is clear here. Science slowly hardens and improves its methods, and strengthens the reliability of its conclusions over time. Morally charged social-psychology matters are not uniquely immune.

38/ The half-life of any given fact is low, and the probability of any particular conclusion surviving long term is abysmal. But cumulative effects of truths that DO endure is inexorable.

39/ Only 1 in a 100 new social science facts may last even a generation, but these accumulating truths create an irresistible, relentless pressure.

40/ So don't be deceived by the high levels of noise, bullshit, bad-faith debate, and religious stalemates around questions of moral significance. Imperceptibly, software is eating them.

41/ What happens as this unfolds? What happens as matters of honesty, trust, compassion, mindfulness, justice, equality, non-violence -- the everyday "jobs" of religions -- are eaten by software?

42/ The answer is that we will increasingly look for answers to the hardest questions of practical morality outside of traditional religion.

43/ Before modern medicine, religious people prayed to be cured of diseases, and asked, in a religious way, "why is God making me suffer?" Today we go see a doctor.

44/ Today we are scrutinizing policing and race with data. We are looking at traffic accidents (with and without human drivers) with statistics and clever conceptual models like the trolley problem.

45/ A hundred years from now, when faced with a question like, "Is this cruel? Is this just?" we will be looking to the time-hardened fruits of a century of software-eaten moral questioning of timeless social questions.

46/ For all its flaws, behavioral economics is the first chapter in software eating religion. It too will get better and challenge religiously structured debates more.

47/ What about more abstract "life, the universe and everything" type questions? We are already reframing even those in light of computing.

48/ The so-called simulation hypothesis proposed by Nick Bostrom and recently popularized by Elon Musk, is the Pascal's Wager of our age.

49/ I happen to think both of these specific examples are ill-posed, but they do show that deep "42" questions are not immune to scientific investigation. Scott Aaronson has some particularly cogent thinking on such matters.

51/ The "I am spiritual, not religious" New Age crowd (my favorite trolling target for years) is no more immune than the literalist downmarket religion types or the abstract-intellectual philosophical religion types.

52/ Meditative practices, traditions and experiences, with or without nootropic assistance, are starting to yield. Data from neurotech developments is going to demystify those matters faster than you imagine.

53/ Like it or not, even the deepest pragmatic, metaphysical, and experiential matters are not immune to novel mental models and investigations inspired by new science and technology.

54/ So is software going to eat God? Yes. The steam engine may have left a lot of room for religion to occupy. Software may leave none at all.