Can the Germanic World Break Smart?

I am very pleased to announce that the complete first season of Breaking Smart is now available in German. Click here for the German version. The translation was prepared by my long-time collaborators and friends at the Gottlieb Duttweiler Institute (GDI) in Zurich, with Detlef Gürtler, editor of the GDI Impuls magazine, overseeing the translation. The folks at GDI -- David Bosshart, Karin Frick and Detlef in particular -- have been long-time supporters of my work, have previously published other writings of mine in German translation, and have invited me for talks and workshops to Zurich multiple times. Working with GDI has been among the most fun parts of my free-agent career over the last five years or so. Trips to Switzerland never hurt :)

I have a favor to ask. Please forward this newsletter issue to any friends, colleagues, and family you have in the German-speaking world.

Now on to the topic of the week. To celebrate the German version, let's talk breaking smart in the Germanic world. Ich spreche keine gutes Deutsch, so this newsletter will unfortunately have to be in English as usual. 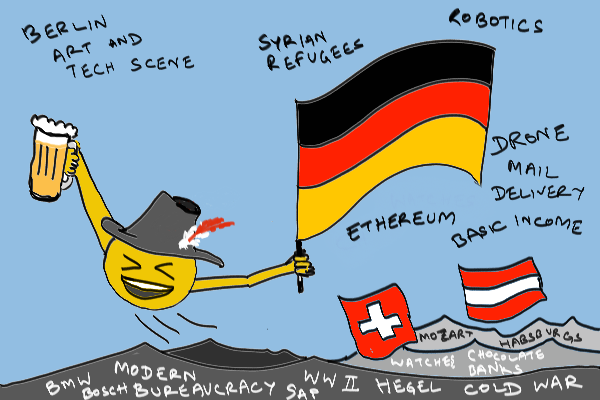 Can the Germanic world break smart?

1/ I first visited the German-speaking world as a graduate student backpacker in 1998, spending a week exploring Vienna, Salzburg, Interlaken and Berlin.

2/ Since then, I have had the pleasure of making multiple trips to Zurich, thanks to GDI, among the most forward-looking think tanks/research institutions I've encountered.

3/ What has always struck me about the Germanic world is the extent to which (even more than other parts of Europe) it looks like its own picture postcards.

4/ That perfection is not accidental. Getting things done exactly right, with Swiss-watch precision, is characteristic of the entire German-speaking world.

5/ The perfection extends beyond idyllic landscapes, watches, and chocolates to economic prowess. The Germanic world is the apotheosis of successful industrialization.

6/ With the possible exception of Japan, no other region of the world has run the playbook of industrial modernity as well as the Germanic world. Not even the US.

7/ Though mass manufacturing at scale, with precision and quality, originated in the United States, it was perfected in Germany.

8/ Going further back, before industrialization, the Germanic world produced a lot of the great science, math, and statecraft of the early modern era.

9/ But there is a dark side to this long tradition of nearly a millennium of cultural and civilizational success, and I'm not talking about Hitler or fascism.

10/ The dark side is corporatism: a model of economic development based on very strong ties between industrial development and the state.

11/ Even the slightest encounter with corporate Germany will leave you wondering whether you're dealing with a business or a government bureaucracy. This is not a good thing.

12/ Credentialism is strong. I've found that Germans are the most likely to take note of, and use, my academic credentials, and call me "Doctor Rao" even when the credential has zero relevance.

13/ In Edmund Phelps' Mass Flourishing, which I've cited several times, there is a detailed analysis of the cost, in terms of economic vitality and grassroots innovation, of German corporatism.

14/ A mix of cultural, economic, and political factors: including the Marshall Plan, reconstruction after WW II, and the Cold War among them, created the modern Germanic world.

15/ In talking to Germans about technology, I find a mix of pride in their own technological prowess and frustration at its limitations, especially in relation to Silicon Valley.

16/ The Germany of BMW, Bosch and Deutsche Bank contends with the Germany of the fledgling startup scene of Berlin.

17/ Switzerland is indelibly linked in the world's imagination with secretive old banks, but also with the Ethereum cryptocurrency and some of the fascinating work emerging from ETH (the university)

18/ The Germanic world is also at the forefront of the most complex social issues of our time, such as dealing with Syrian refugees in a humane, but pragmatic way, and exploring basic income

20/ Like the rest of Europe, the Germanic world too faces the challenge of an aging population, and of engaging post-industrial modernity with a shrinking base of native-born young people.

21/ Like the rest of Europe, the future will depend on finding a generative way to absorb the vigor and youth of immigrants, particularly from the Middle East and North Africa, into Germanic culture

22/ Could the next Goethe or Hegel be born in Turkey? Will the intellectual heirs of the Bernoulli brothers be a family of Syrian sisters?

23/ Political shifts occurring today will determine whether those kinds of positive stories play out, or whether the region shrinks fearfully behind the walls of its own past like so many other regions.

24/ But there is definitely a case for cosmopolitan optimism. The ancients of the Germanic world, after all, were the OGs ("original gangsta" in the positive sense) of breaking smart in the West

25/ They created a new Europe out of the fall of a decadent, sclerotic Rome. They sparked the Protestant revolution that forked a vigorous new Christianity from the Catholic tradition.

26/ Even the 20th century, with its dark demons, produced great things: the modern pharma industry and space programs are part of the mixed legacy of the early 20th century Germanic world.

27/ And don't forget: Freud, Jung and their followers in Switzerland invented the modern tradition of dealing with your demons, breaking free of the past, and self-actualizing.

29/ Like it or not, even the genealogy of the Silicon Valley playbook of guerrilla disruption can be traced to German military innovations in WW II such as Blitzkrieg.

30/ So there is no question that the Germanic world has a deep reserve of creative cultural energy, and a demonstrated capacity to repeatedly break free of its own past in powerful ways.

31/ The challenges of 2016 are harsh ones: aging population, tricky immigration, aging industrial base, ugly old demons from the Crusades to WW II rearing their heads.

32/ But I'm betting the Germanic world will break smart in a powerful way, adding yet another chapter to its history of astounding contributions to the collective cultural wealth of humanity.

33/ So Vielen Dank Germanic world, for all the great stuff you've done over the last 1000 years. Now get off your Arsch, getranke ein Bier, and do more great stuff. Prost!

Heads-up: French and Spanish translations are also underway. Look out for those later this Fall!