Today, the best software is continuously deployed into its operating environment. Why don't humans continuously deploy their lives into history? Why do we enter the vast currents of history by picking one point and mode of entry at age 18 and then living with that high-stakes decision forever? 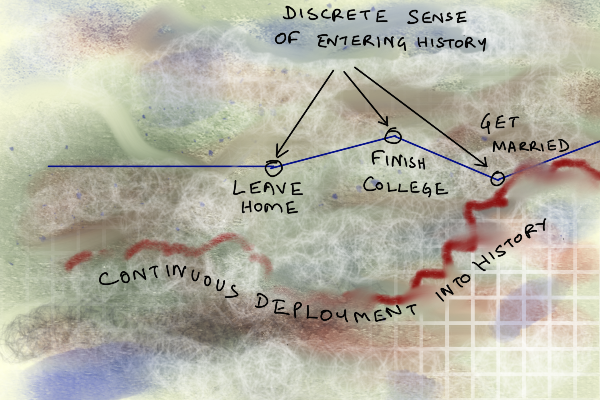 When we look back at the lives of our ancestors, it is blindingly obvious how they were powerfully, and continuously shaped by history. Yet we rarely consciously consider history in making our own life decisions. In fact, most middle-class people seem to consciously think about history only twice in their lives: picking a college/major ("this 'computer science' field seems to be hot, hmm?"), and picking a place/industry to work in after college ("Plastics!"). A minority do so a third time: in deciding to marry in socially transgressive ways for a given period in history ("Hmm...I think I can actually marry this person without scripting a reboot of Romeo-and-Juliet at this point.").

The poor are even more passive. They are less likely to go to college and pick from a wide range of possible educational and career trajectories, or move beyond their communities to make unusual marriages. They are simply swept along by the currents of history with little to no agency. Doing whatever their mother or father did, and marrying the boy or girl next door (though that's changing in strange ways for all classes due to online dating). No motor, no rudder.

Of course, the fact that humans only plan a 0-3 step deployment into history does not mean that history only touches their lives three times. It just means that all the other moments history impacts you directly are unplanned reactions to surprises. Mostly unpleasant, blindside surprises.

The median person deploys into history via 0-3 scripted moves, and a dozen unplanned reactions to that script being hacked by history. Three planned, consciously considered design decisions, a dozen panicked fight-flight-freeze emergency reactions. So much for "life authoring."

What does it mean to have an active sense of history? A sense of history that allows you to adopt a ready-fire-steer approach to navigating it with always-on agency instead of in an uncontrolled ready-aim-fire ballistic arc launched at 18?

Here is a clue that you may find validated by your own life.

Looking back at my own life, paradoxically, every time I've given up trying to control my life with "plans", I've gained more control over it via increased sensitivity to serendipitous opportunities. Every time, I've allowed myself to slow down, things have speeded up because it's easier to see where you're going. Every time I've fallen off some sort of getting-things-done productivity wagon, I've gotten surprising amounts done with surprisingly little effort, because tunnel vision turns into situation awareness and recognition of a fruitful direction change.

There appears to be some sort of strange zero-sum tradeoff between control authority and context sensitivity in life scripts. And the more volatile the historical context you're living through, the more you need to sacrifice control for context. With life as with cars, it's a bad idea to turn on cruise control on twisting, turning roads with choppy traffic and bad weather.

What's going on here? The thing is, historical currents are very, very powerful. Your context is being shaped and reshaped by forces vastly more powerful than the puny ones you can bring to break on them. To continuously deploy into history is to work with that force, tacking, twisting, turning. To try and "plan" your life is to hide from history and engage in futile efforts to fight it.

If you treat history as mostly a spectator sport, and attempt to insulate yourself at the points where you might be exposed to it, your life will evolve as a series of fragile, temporarily stable, hiding-under-a-rock phases, punctuated by catastrophic moments when history catches up with you. The historic moments in your life will be few and far between, and the choices available during those moments will generally range from "bad" to "awful."

It takes a strong stomach, with a high tolerance for the nausea of processing history live, to continuously deploy into history. You need a strong sense of history so you can pick your little battles rather than dissipating your limited individual capacities in futile fights against forces far too large for you. Paradoxically, having the biggest impact on history requires recognizing the battles you cannot possibly win. Those who bestride history like colossi are remarkable as much for their sense of fatalism about the things they recognize they cannot change, as they are for the vaulting ambition they bring to the things they recognize they can change.

And this is true whatever your level of energy or ambition. An ounce of increased context sensitivity is worth a pound of planning and scripting whether you're shooting for the moon or merely a comfortable retirement.

A "big history" approach to life is like a "big data" approach to building software. The underlying operating assumption is that more data and simpler algorithms beats less data and more complex algorithms. The data in question is high context awareness, incorporating both a rich sense of history and the contemporary situation. The "algorithms" in question here are all the scaffolding around planning and productivity you put into your life. They are important, but you must not sacrifice too much marginal context sensitivity for too little marginal control authority.