Eddies in the Informational Continuum

In the last two decades, we've come up with a whole rich vocabulary for talking about synthetic digital realities. Many popular terms today date to the 1999 Matrix movie: red pills, blue pills, glitches, and of course matrix itself. Other terms, like filter bubble and context collapse come from researchers. Steve Jobs contributed reality distortion field. Karl Rove contributed we make our own reality, while Kellyanne Conway introduced us to the wonderful world of alt facts. Other terms like social object, abstraction leak, legibility, and narrative violation get at the how information itself shapes the space it induces for people to live in. My own contributions to the lexicon include refactored perception, escaped reality, circled wagons, and manufactured normalcy field. I'm sure I've missed many more good ones, so if you know of any, let me know. I even made a glossary once (which I need to update).

Revealingly, one term we don't seem to use as much as we used to is information overload. In a way it is because we actually solved that problem with social media, to the point where we now suffer from FOMO instead of IO. We just don't like any of the solutions.

So do we need more words and phrases? Well of course we do! The world is getting complicated faster than we can come up with terms to describe what's happening. I made up a new term: context vortex. A context vortex is a headspace where almost every thought you think is similar to, and has a similar effect as, one you've thunk before. A context vortex is a memetic Groundhog Day world featuring its own circular timeline. How do you get out? 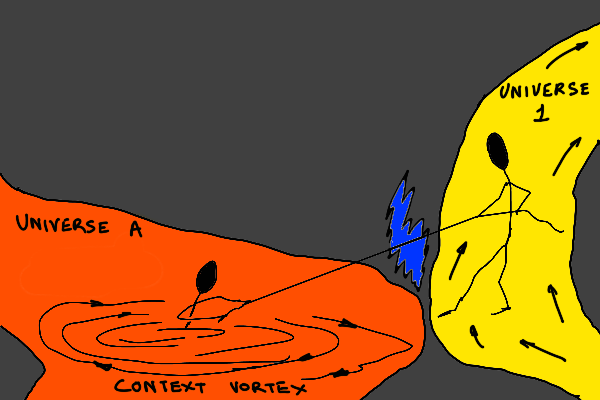 1/ I'm not against thinking thoughts multiple times. Often you need to do that to really figure something out. But in a context vortex, your information environment is a circular churn of stale thoughts lacking a central mystery.

2/ It is a regime of repetitive patterns of thoughts that all seem to be vaguely familiar, and well past diminishing returns on attention. A tarpit of tedium instead of an intriguing mystery you're circling to solve. Insights all seem like echoes of each other and none of them ever changes anything.

3/ Let's relate the idea of a context vortex to a few other familiar terms in our digital reality vocabulary to compare and contrast.

4/ A context vortex is like a gravity well of the mind. A headspace that requires either a significant internally generated burst of energy to escape or an externally grounded force.

5/ Being in a context vortex is like being a fish in water except you are aware of it, even though you are not aware of alternative contexts you could be in. The repetitiveness/staleness of thoughts thought gives the game away.

6/ It is like being a frog in a well, except there are no walls. Just a sense of an information space that's folded in on itself. Foreign bits can enter but not violate the logic of the vortex.

8/ A context vortex is not a filter bubble or consensus reality. It does not necessarily keep out information that might be locally distressing, or preferentially let in consensus-reinforcing information.

9/ A context vortex is a space of ideas that allows thought to churn around in circles without getting anywhere. It is not that new information cannot penetrate, but that it cannot be processed in vortex-disrupting ways.

10/ Unlike a normalcy field, a context vortex allows weirdness to be experienced. Glitches and abstraction leaks are noticeable but not actionable. A context vortex might even be in a highly abnormal state of Hobbesian dissensus: stable war of all against all.

11/ You might even generate unpredictable responses to surprising things, but not vortex-disrupting ones. Everything just feeds the vortex. Even the most creative thrashing just seems to suck you in deeper, like quicksand.

12/ Thought is possible, but feels repetitive and futile. There's often even a local name for the phenomenon. It's all just fuel for the Discourse, the Outrage Machine, the Hot Take market, the Paradigm, the Hype Cycle.

13/ A context vortex is an emergent organization of sort. A stable dissipative structure like a tornado, with a tendency to use all activity to reinforce and perpetuate itself. You work for the vortex, usually for no pay.

14/ As with organizations, any substantive response to a novel stimulus takes second place to a first response that sustains and perpetuates the vortex. Existential threats to the vortex are reduced to fads, fashions, and flavors of the month.

15/ A context vortex has some of the characteristics of depression, but need not feel depressing. Many context vortices are quite cheerful in fact. The shared feature is the repetitive cognitions, and failure to feel and enact surprise in destabilizing ways.

16/  A context vortex is also like an OODA loop that has been "folded in on itself" and adversarially cut off from external reality by a powerful enemy. Except there need be no actual adversary. A context vortex can emerge spontaneously due to simple turbulence in a broader environment of information churn.

17/ A context vortex is necessarily social. It is not just a set of information sources that you might be circling within, but a set of people who have Bernean game-like predictable responses to everything. It need not, however, be tribal.

18/ A context vortex is an emergent information processing game. It has a characteristic computational personality. It is a computer in the form of informational quicksand.

19/ If we could model them formally, I suspect context vortices would be Turing-complete information environments: systems that can run arbitrary "programs." But in a closed way, like an airgapped computer.

20/ Computer scientists talk of "Turing tarpits" -- maximally expressive computing systems where "everything is possible but nothing is easy." A context vortex is a messy social computing Turing tarpit made up of communicating humans.

21/ A context vortex has no necessary physical/social embodiment. It might be a city, or just a corner of Twitter. It might be a notional "machine" like the "hot take machine" or just a unique sense of exhaustion experienced by participants.

22/ A context vortex is not a subculture. It need have no community, content or insider languages attached to it. The essential features are inescapability and cognitive closure. A headspace that's easier to get into than out of.

24/ In a context vortex, subjective social time has a coherent direction of flow: around circular pathways. There are informational equivalents of day and night, weeks and months. Though the circularity is that of a strange attractor rather than a simple orbit.

25/ This sense of a shared, local, subjective stream time is perhaps the signature feature of a a context vortex. People in one feel like they're sharing the same timeline and share a tempo. And that's pretty much the only thing they necessarily share.

26/ Let's top off this impressionistic set of familial comparisons with some examples. Twitter has hundreds of context vortices that do not intersect much. Major metro areas are sets of context vortices carved up by transit and geography. Burning Man is a transient context vortex. 4Chan is one driven by a meme-making loop.

27/ Now that you have an understanding of context vortices and some reference examples, how do you escape one, and where do you go? There's bad news, worse news, and good news.

28/ The bad news is that you cannot easily escape a context vortex, especially a digital one, from the inside. In terms of the gravity well metaphor, it is like a planet that's too massive for chemical rockets to achieve escape velocity from its gravity.

30/ But the good news. There are always neighboring local realities that are not in as strong a vortex state (there's always some vorticity). Where fresher thinking is possible. Where novelty can be more fully accommodated through change.

31/ To escape in this way, it is not enough to simply immerse yourself in new information. You must think about it differently. The only way to do that is to be talking to somebody who is not in your vortex.

32/ In other words, to escape a context vortex, you must start talking to one or more people who are not in it. The mere act of talking to somebody who is not susceptible to the vortex forces starts to draw you out.

33/ Of course, you might draw them in. Or you might both draw each other out and bootstrap a tiny new 2-person context vortex, circling each other mentally. Maybe your new reality will gather enough mass to tear the original parent realities apart via gravitational tides (I'm doing some outrageous metaphor mixing here).

34/ The key feature of such an escape is that you don't escape to a more or less limited reality. You escape to an equally expressive peer reality. Just one that's in a less toxic state, computing less stale things.

35/ Becoming a reality-hopping, vortex-jumping time traveler in the streams of the collective consciousness multiverse (I call this multitemporality) is not easy. It means reinventing your thinking every time it starts to get stale.

36/ But I suspect we'll all need to do learn to do this. Digital human society is neither like pre-modern isolated local realities, nor like industrial age global consensus reality.

38/ There is no up or down, no subsumption hierarchy of increasingly "real" realities that you can traverse vertically with red and blue pills. There is just a decentralized web of realities, evolving on their own, making and breaking connections.

39/ Travel between realities can become systematically easier or harder. An example is the geographic world of nation states which is like a set of connected context vortices, with the degree of ethnonationalism determining difficulty of movement.

40/ But ethnonationalism in physical geography is nothing compared to the multitemporal world of weird context vortices waiting for you online. Even those of us who've been mostly living online for decades aren't that good navigating it.

41/ To survive there, you're going to have to get good at controlling where your mind goes, as opposed to where your feet go. And that's much harder. But it's worth doing.

42/ To paraphrase Stewart Brand (and sneak in a Doctor Who reference) we are as Time Lords and we might as well get good at it.