Flame Wars Are a Good Thing

I've had three sharp reminders in the last week about how online filter bubbles work, and why, despite the sense that civil discourse is breaking down all over the place, online filter bubbles and flame wars are a good thing. Because they replace offline filter bubbles and real wars, which are far, far worse. Sometimes, when things get really toxic on social media, and the news media seems to be melting down into an incoherent pool of cluelessness, ignorance, rage-filled ranting, ideological derping, and everything except good journalism, it can seem like there is no hope for wisdom outpacing bullshit. This is exactly wrong. All these signs point unerringly to one conclusion, wisdom is in fact outpacing bullshit, and this is what it feels like. What is actually in decline is a false sense of security created by paternalistic forces that have gotten used to believing they know what's best for all. 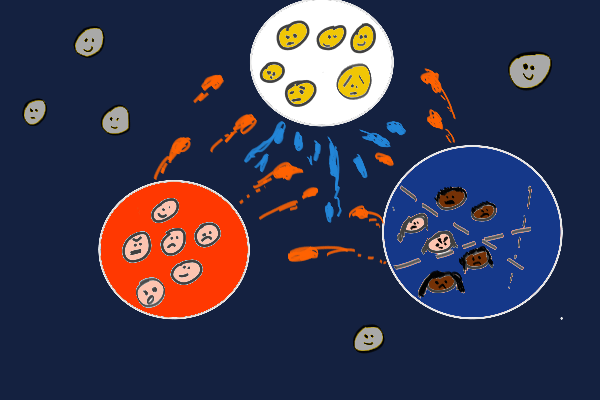 1/ A filter bubble is a space defined by a boundary that selectively lets in certain kinds of information, like a cell membrane. Kinds that confirm your biases.

2/ They can be created by geographic boundaries, algorithms (the common connotation), or social sorting effects of the sort made famous by Thomas Schelling.

4/ Let's look at three examples of the dynamics of filter bubbles and flame wars from the last week, from Facebook, U. Chicago, and Burning Man.

5/ Example 1: A lot of people discovered last week that Facebook had been reinforcing their filter bubbles -- but that they had the power to tune it.

6/ Dismayed though you may be that Facebook is showing you what it thinks you want to see, consider this: you can tune this in a way you cannot tune village boundaries.

7/ Example 2: U. Chicago took a stance against "safe spaces" and "trigger warnings" in its letter to new students.

8/ This triggered (heh!) a round of self-congratulatory derping among those in a self-styled "free speech" filter bubble, and outrage in the social-justice-warrior filter-bubble.

9/ I'm not immune. Being closer and more sympathetic to the former, I mostly saw the self-congratulation. Until I saw this thoughtful twitter conversation from the SJW side.

10/ It pointed out how campuses like U. Chicago ironically act as safe spaces designed to not trigger the privileged, and how subtle hypocrisies lurk beneath the free speech stance.

11/ As some of my friends pointed out, the fact that I saw (and appreciated the merit of) mostly the "free speech" side initially speaks to the biases in my own filter bubbles.

12/ Example 3: For the last few years, it's been an August ritual of mine to poke fun at Burning Man (an annual religious pilgrimage for Silicon Valley faithful).

13/ This year though, I saw very few BM (insert poop joke here) posts to make fun of in my feeds. The algorithms appear to have tuned me out.

14/ The big lesson from all 3 examples is that online filter bubbles are real. In the US, the major ones are the red, blue and white ones, mirroring the offline world.

15/ Red is socially conservative, largely straight-white-male. Blue is socially liberal, full of non-white-males, with lots of "intersectional" divisions among them.

16/ Red and blue hate-read and flame each other all the time, around provocations ranging from guns and abortions to hijabs and cop shootings.

17/ White is a hand-wringing centrist-moderate filter bubble with a delusional belief in the calming power of reason. It tries to pour water on flame wars (which ends up acting like oil).

18/ And then of course, there are the greys, or aspirational greys, like me. Each time we become aware of a new filter bubble around us, we try to break out.

19/ Even emojis aren't immune to the politics here. Design polemicist Eli Schiff has an interesting essay on the politics of emoji. If I could, I'd use grey emoji.

21/ This is a toxic online world that can be highly painful for many, especially minorities, to participate in. The recent experiences of actor Leslie Jones are an example.

22/ But consider: this world replaces an insular geographic world built around discourses that intolerantly reject all challenges, even as they congratulate themselves on being "open."

23/ They are in fact hermetically sealed by physical constraints ranging from real skin colors and rivers to gas prices and visa regimes.

23/ Trump voters come from such geographic filter bubbles. Recent Gallup data shows that they are disproportionately from less diverse neighborhoods.

24/ Campuses like U. Chicago are geographic filter bubbles catering to the bias confirmation needs of the privileged. Universities globally are sadly that way.

25/ Recent battles between administrations and so-called social-justice warriors can be understood as one kind of geographic filter bubble rejecting the Trojan injection of another kind.

26/ Irrespective of the merits of the case on either side, the fact is that culture evolves through violence between filter bubbles. Not through peaceful conversations within them.

27/ When the wars are flame wars, and occur between online filter bubbles, there is less violence, more learning, and more cultural information transmission.

28/ When the wars are real, as in Syria, and between geographic filter bubbles, there is more violence, less learning, and less information transmitted.

29/ Those of you under thirty may not remember a time before online filter bubbles and flame wars were the dominant culture war battlefields.

30/ I grew up in India, where culture wars play out in depressingly similar ways to the US, on a saffron, green, and white canvas, the colors of the Indian flag.

31/ Saffron is the majority Hindu -- and led by upper castes -- population. Green is the minority Muslim, often allied with, and strongly overlapping, lower castes.

32/ White (flag, not skin) in India would correspond to the relatively neutral and privileged other minorities, such as Christians and Parsis. Like Asians in the US.

33/ Growing up in a mid-sized Indian town in the 80s, we took it for granted that there would be occasional riots around the ghettoized Muslim neighborhoods.

34/ School was canceled a couple of days every year due to rumors of rioting or actual riots. People sometimes stayed home in anticipation of riots on certain festival days.

35/ That's the ugly reality of resolving culture wars in geographies, with atom-based tools. You get ghettos, riots, and actual suspension of learning.

36/ As in the rest of the world, the culture I grew up with has moved online. As with American culture wars, Indian culture wars today are waged online.

37/ Having experienced both periods across two countries, IMO online is better. At worst you fight trolls and hate-read/hate-share links that make you mad.

38/ It's better than rioting and arson. An ugly, toxic feed full of trolling and baiting beats an ugly, toxic neighborhood with guns, arson, and street knife-fights.

39/ (Though of course, the two are bleeding into each other as digital dualism breaks down through mechanisms like swatting and Pokemon).

40/ That said, the Internet is not a safe space for your mind. Doing culture online is not as hard as winning a knife fight on a burning street, but it isn't easy either.

41/ Here's a great blog post by Sarah Constantin on the personal qualities it takes to navigate distressing information environments, online or offline.

42/ For those of you who don't keep up with online culture, what's keeping you? Here's a map and guided video tour to get you started.

43/ Also, I just wrote an experimental sci-fi story that touches briefly on these themes.