How Circled Are Your Wagons?

I'm recovering from a bit of a the cold or flu or something of the sort. I can't tell anymore. It's been a bad season for that broad family of nagging ailment, and I seem to have spent an unusual fraction of the last few months operating at less than 70%. The flu shot apparently hasn't worked as well this year as past years. Feels like a symbol or portent of something. Anyway, as a result, instead of new content, you're getting a recycled, but refurbished and significantly expanded, live tweetstorm from a few days ago (from when I was feeling the most feverish, so hmm). The illustration is new though, and if I do say so myself, one of my cleverer ones.

It's about an important but neglected phenomenon I call Circled Wagons (the reference is to a bit of settlement-of-America lore in case you're not familiar with the term), which arises as a response pattern to disruption of communities by the Internet. This is primarily about the American example, but I have no doubt  Circled Wagons exist everywhere traditional community life has been disrupted by the Internet. 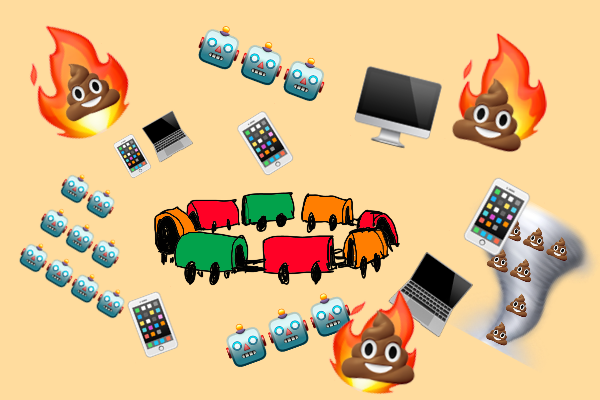 Circled wagons in a world of online stressors.

1/ I’ve concluded there are 4 types of relationships meatspace communities can have with digitization, which I call a) Circled Wagons, b) Resurrected, c) Atomized, and d) Precipitated.

2/ Circled Wagon communities were never fragmented by digitization because they were homogenous, immobile, and geographically compact. They’ve been largely turned into de facto alt-reality cults by digital forces.

3/ Resurrected communities are ones torn apart by digital forces, but which have consciously reforged themselves. What didn’t kill them made them stronger. Well-digitized workplaces that foster IRL communities while using slack/video conference/flex work are examples.

4/ Atomized communities are ones that were torn apart by digital forces but couldn’t pull themselves back together again. Urban apartment communities are an example. Once digital tools made it easier to maintain deeper remote relationships, neighborly block-party type communities broke down

5/ And finally, Precipitated communities are ones that went offline after first forming online. They are kinda like second gen stars (confusingly called Population 1 in astrophysics) with higher amounts of heavier elements, which are a good metaphor for the tech content.

7/ Almost all severe societal problems involve Circled Wagon and Atomized communities. Which is not to say they are entirely to blame for what happened to them.  Most “social impact of Internet” thinking has focused on Atomization, and ignored Circled Wagons.

8/ It is unclear why we made this mistake over 2 decades, but the results are there to see. We understand the anomie and estrangement of atomization fairly well, but severely underestimate what happens to communities that stay together while being hit by digitization.

9/ I think we’ve been making the lazy assumption that geographic and social mobility can always be assumed to play a role in how people adapt to digital transformation. In fight/flight/freeze, we (as usual) neglected the “freeze” demographic. Turns out it’s the most important.

10/ Why? Fight responses tend to drive towards their own resolution naturally, so they don’t grow out of control invisibly. Flight tends to put people in more adaptive conditions, with atomization being the cost. Freeze? Problem just grows worse and worse.

11/ The psychographics of Trump voters is almost pure freeze/Circled Wagons: low mobility, culturally homogeneous, low college education.  Such communities are at the highest risk of collective radicalization from digital social transformation. Why?

12/ An Atomized, Resurrected, or Precipitated person largely sees information warfare as confusing FUD and noise, and develops some hygiene practices. All of them have filter bubbles that are primarily online and not being significantly reinforced offline.

13/ When I tweetstormed this originally, one reply speculated that the other groups are more likely to tune their filters carefully and follow/friend real people, while Circled Wagon types are more likely to passively follow random or algorithmically suggested accounts.

14/ This seems plausible and worth investigating. Certain patterns of response to digital forces might make you more vulnerable to fake news and manipulation. If you have enough real people in your life already, you're more likely to treat online information passively, like the news. It's "fake news", not "polluted streams" for a reason.

15/ Possibly something like monoculture risks from planting the same species of tree densely. Or something like "herd susceptibility" by analogy to "herd immunity." Circled Wagons are susceptible to epidemics of memetic flu.

16/ Circled Wagon communities unlike the other 3, are like cognitively aligned magnets. They have an online filter bubble like the rest of us, but it is strongly and powerfully reinforced offline via meatspace interactions with people who all think like them.

17/ As I’ve been saying since one of my early Breaking Smart essays, geography is the strongest filter bubble (credit for this insight to @pmarca). But we now know a shit ton more about why this is and what the consequences are.

18/ In-person interactions are powerfully human, and add massive weight to belief structures. Picking up a fake news opinion from some rando is one thing. Having it then reinforced by your 10 lifelong neighbors who also picked it up, and collectively fleshing it out IRL over a conspiratorial beer... explosive.

19/ We’ve all seen this. It’s especially obvious in (for example) the things our old relatives forward. Everybody above 70 is apparently on the same email lists and they all live next to each other.  But it’s not a problem of age. It’s a problem of cognitive mobility.

20/ Cognitive mobility is probably a lousy term but I can’t think of a better one. Something about how much variety there is in the minds that most powerfully reshape/reweight your beliefs. One in-person interaction counts for like 10-100 online, for the same belief.

21/ What can we do about this? You can’t just yell at people “choose Atomization over Circled Wagons” and you can’t guarantee that a more open response to digital forces will lead to Resurrection rather than death.

24/ This adaptation scale is partly due to the fact that those who most strongly desire physical community are also the most scared of losing it, and therefore scared to try bolder cultural practices of transformation that risk death of the community.

25/ For Circled Wagon types, fear of ending up Atomized far exceeds allure of ending up Resurrected, so they largely don’t try. Stick to the community forms you know.  Except for alienated kids in basements who know they have too many decades of life left for it to work out.

26/ An interesting tech challenge is working more on Resurrection and Precipitation products. This might increase the confidence of Circled Wagon types, assuage their (unacknowledged under bluster) fears and give them the sense of security to try more open adaptation.

27/ It is really pathetic that in the last couple of decades the best we’ve been able to do with Precipitation tech is meetup.com. There is no good Resurrection tech that I know of, besides randomly finding old school friends you actually want to reconnect with on Facebook.

28/ Until there are products that better meet this need, we’ll keep having to deal with entrenched Circled Wagons. They’ll continue to die slowly, painfully, and angrily. With their Boomer edge eventually dying and leaving behind a radicalized youth in unviable/unlivable towns.

30/ This map tweeted by Kenneth Smith and with this commentary thread by Noah Smith get at some of the geographic dynamics of Circled Wagons in the US. Noah identifies the communities with white flight and what David Brooks labeled exurbia. The map is revealing though I'm not quite sure how strong Noah's analysis is.

31/ Jonathan Glick made the intriguing suggestion that these Circled Wagon communities "were abandoned, then decided it was their idea."

32/ One reply argued that the process of wagon-circling started well before the Internet, with the decline of community life as famously documented by Putnam in Bowling Alone.

33/ There is some merit to this argument. The Bowling Alone phenomenon was associated with the Nixon era culture wars and the slowing of post-WW2 growth/prosperity, and later with globalization and Reagan-era deregulation.

34/ But that wave of impact I suspect had largely played out between 1960-1990. I think what were seeing now is truly new. Those left-behind Bowling Alone communities got radicalized by their herd susceptibilities/monoculture risks.

35/ Perhaps we can think of it as a 1-2 punch. Bowling Alone era set these communities up with a mix of vulnerabilities and cohesion. The Internet era knocked them down with new culture wars.

36/ Don't forget the other side of the equation. For those seeking to manipulate, the existence of large, homogenous, internally tightly connected, and susceptible populations is effectively an economy of scale.

37/ Yes you need clever hackers and bot accounts to do the manipulation, but you also need these communal economies of scale to make the exploitation profitable.

38/ This is not new incidentally. It goes back to the clientelistic vote-block politics of the sort invented by non other than Trump's spiritual forefather, Andrew Jackson.

40/ You see this in extreme form in historically highly segmented and divided countries like India, where caste, language, and religion naturally carve up the polity into exploitable blocks conveniently set up for efficient manipulation.

41/ What the Internet does is take this old fashioned clientelism, pump it full of the steroids of fake news, and turn them into muscular, assertive, grievance engines. And all this can be done remotely, without need for bribing community leaders to deliver votes.

42/ My friend Renee DiResta has been writing about these phenomena for a while. She calls these always-on manufactured crowds. The manipulation techniques, she argues, were developed by ISIS and refined by Russia.

43/ She's also written about the fight against the anti-vaxx crowd (where she played a key active role). Rather appropriate that communities that are vulnerable to memetic contagion would organize  against vaccination (mostly on the Left in this case)

44/ If my Circled Wagons thesis is correct, we may be faced with a social phenomeon even more deep-rooted than always-on crowds: digital clientelism. Enduring, angry communities that exist at the core of larger crowds, the way black holes exist at the centers of galaxies.

45/ This thesis leads to some counterintuitive ideas. For example, the tech backlash people are exactly wrong: the solution to digital ailments may not be more IRL/meatspace life, but less. Meatspace is the problem, not the solution.

46/ If your IRL community resembles an insular Hallmark Christmas movie community, one that looks pretty and free of digital anomie, by unplugging into it, you may actually be reinforcing something that is cancerous within the broader national and global polities.

47/ I'm not saying you should be trying to get away from physical reality and upload your brain into the Internet asap. I'm saying meatspace makes a good servant but poor master in an information age.

48/ Yes, we are creatures of flesh and bone who live in physical space and eat and poop and have neighbors. But we are most powerfully creatures with minds.

49/ If you delude yourself that your local physical environment matters more than your global information environment, you're setting yourself up for manipulation.

50/ I have of course, long been an advocate for treating the Internet as your primary home, and being a cloud mouse. Now I have more reasons to think that's not just a personal choice, it's the better choice for mental health.

Want to change how you receive these emails?
You can or