Share this post
I don’t care to die on any hill I’m actually capable of climbing
studio.ribbonfarm.com

Venkatesh Rao
Dec 7, 2018
Share this post
I don’t care to die on any hill I’m actually capable of climbing
studio.ribbonfarm.com

I recently formulated my Groucho Marx Law of Martyrdom: _I don’t care to die on any hill I’m actually capable of climbing._‬ For those of you unfamiliar with the references, it's a combination of the phrase from military culture, not a hill I want to die on, and the famous Groucho Marx quip, "I don’t want to belong to any club that would accept me as one of its members."

Actually, there's a third geeky reference to "hill climbing" as a metaphor for gradient-following (descent or ascent is just a matter of flipping a sign) optimization methods and peaks as local optima. Via this allusion, my law of martyrdom is actually a restatement of Donald Knuth's famous line, "premature optimization is the root of all evil."

All these ideas cluster around the same broad theme -- it is almost always better to live to fight another day than to risk your life by blowing all your resources winning any particular position. If you have a resource surplus, it is almost always smarter to use it to buy more life than to expend it all on the current challenge with diminishing odds. The only real exceptions are when the alternative is dying anyway, on somebody else's terms, or situations requiring genuine, altruistic sacrifice (very rare in practice) so others can live on.

This is close to a basic credo for our age. If the industrial age was about winning, the digital age is about living to fight another day. And another, and another. That's perpetual beta in a nutshell. It is the spirit of survival. How do you go about embodying it? 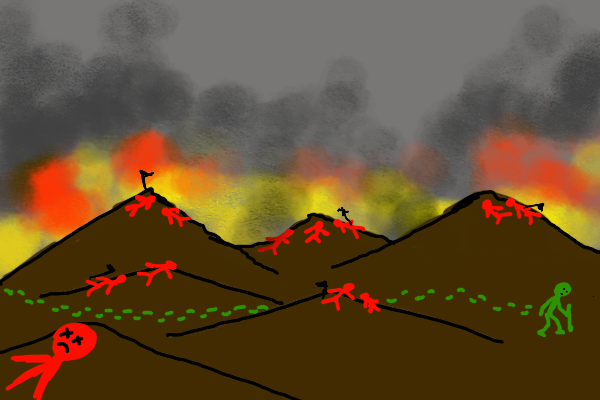 Survival is your basic job. Everything else comes second. Yet, we humans routinely misunderstand what survival entails.

_Almost all the time, survival means walking away while you're still capable of fighting on, rather than fighting to the death. _

It should be obvious: "fighting to the death" is definitionally not surviving. It is a suicidal instinct. So why do we indulge it? The answer is our capacity to identify with a particular task or mission. We invest so much of ourselves into an effort that we are unable to separate ourselves from it. The failure of the effort becomes identical, in our mind, with our own terminal loss of identity. That's why sunk costs have such an irrational hold on our thinking. We become unable to separate losing from being wrong, being wrong from social death, and social death from actual death. Skin in the game becomes life in the game. Cutting your losses becomes cutting your own throat.

If you're not person-winning-this-hill, what are you?

Well, possibly the answer is not-dead-yet person, which is everything, even if it seems like nothing in the moment.

Tactical retreat, not fighting to the death, is the essence of Darwinism. Our poetic image of a Darwinian ethos emphasizes bloody fighting to the death, and going all out to win, yet that's not what actual Darwinian survival situations look like. Watch a wildlife documentary -- the big cat fails to catch its prey more often it succeeds. You can see it give up the chase voluntarily rather than keeping up the chase till it drops dead of exhaustion.

Nature is not "red in tooth and claw" so much as it is relentlessly patient and conservative in energy terms, while it looks for the lucky break. The lengths to which living things will go to conserve energy and live to fight another day are truly astounding.

In the human world, cultures of unnecessary dying on unimportant hills can be found all over the place -- sports, artistic striving, and of course, entrepreneurship. In each of these domains, consistent, long-term winners exhibit a decided reluctance to die on any particular hill.

In the world of entrepreneurship, the spirit of survival can be found in Bill Janeway's formula, "cash and control." The basic job of a startup is keep on starting up until it is no longer a startup but a predictably profitable business. This means living to fight another day through good and bad fund-raising seasons, successful and failed product iteration efforts, good and bad monetization experiments. Through all this, the key is to not make the mistake of dying on any particular hill.

This means never running out of money, and never losing control over your actions. What this looks like is repeatedly resisting the temptation to die on specific hills.

Though the mini-crusade against #hustleporn has primarily been taken up by the lifestyle business side of the tech world, it isn't actually about work-life balance or specific ritualistic notions of staying healthy like a certain number of hours of sleep a night or a certain number of hours with family per week. It is about getting to know your limits better and better, and making sure you never cross the thin red line that separates indefinite survivability from an irretrievable spiral of self-destruction. This has many dimensions -- mental health, physical health, financial health, relationship health -- but the key to developing good instincts here is simply developing a healthy skepticism towards hustle porn. What does this look like?

My favorite bit of hustle-porn counter-programming is Patton's famous line "I want you to remember that no bastard ever won a war by dying for his country. He won it by making the other poor, dumb bastard die for his country."

The opposite is a reluctance to ever fail twice in the same way. I tend to this extreme personally. As I tweeted recently:

'A good measure of how much of a fit you are for gritty, glass-chewing, winner-take-all type games is how many times you can handle hearing "no" before quitting. My limit is 1. In general, I have very low patience for paths where others have genuine yes/no control over my future.'

Most domains require a degree of mindless repetition of course. Sometimes these domains are of the "you only need 1 yes" variety (fundraising, finding a book publisher, getting a movie break). Other times, the domains just have a particular hit rate (one in a hundred sales leads leads to a sale for example). Whatever the cause, the question is, if the reward requires repetition close to the exhaustion point of your resources, what do you do?

Let's say a particular game has a 1/100 chance of paying off, and you have enough money for 99 tries. Do you blow it all? Or do you at some point switch to a game with more favorable odds while you still have money left?

Where you stop and change strategies between giving up after a single attempt and blowing all you have is something of a personality trait, a set-point of default risk taking (which includes potentially irrational sunk-cost attitudes). Often it is a function of how you learn.

My personal default of a single attempt is actually almost as risky as blowing it all for a lot of people, but it works for me because I tend not to improve very much at a skill with practice, so for me, the right thing to do is almost always give up once I've learned enough to understand the odds and reward structure of an activity. For me, it pays to keep changing games until I find one I'm naturally good at and can quickly derive a return from without getting significantly more skilled in any specific way. For others, who are good learners, it pays to stay in a game until they hit their plateau.

Here's a 2x2: quitters versus winners, learners versus non-learners. I'm mostly in the quitter-and-non-learner quadrant (the archetype resembles the wizard Rincewind in Terry Pratchett's novels). I rely almost entirely on getting unreasonably lucky. I won't draw the thing, but here's the full 2x2.

In the 3 non-hustle-porn quadrants, the trick is to try enough times to get a sense of the reward structure of the domain before switching (there is a whole mathematical theory of this, called multi-armed bandit theory, that is basically a model of evolution). What is dumb is persisting past the point of diminishing marginal returns on your learning approach, with reasonable success still out of reach of even an all-out effort.

Another way to think about this -- a hill not worth dying on is a hill worth living on under some conditions. If at some point, as you near the top, you realize you're going to win, and with enough left over to actually enjoy it, then it's worth soldiering on. That is, at some point you gain reasonable confidence and certainty that the effort is not going to be futile. You're not just going to win, you're going to stay on top happily, if not for ever after, at least for a while.

To quote myself one more time in what is turning into a quote-myself newsletter, "Intelligence is the capacity to be exhausted by futility before you even get started." (this is one of the loading messages in my slack, where it serves as a helpful periodic reminder that whatever hill I'm on at the moment, it's probably not worth dying on).

So ask yourself periodically: is this a hill worth dying on?

Share this post
I don’t care to die on any hill I’m actually capable of climbing
studio.ribbonfarm.com
Comments