Today is April 1st, and you're probably getting some really good practice telling pranks apart from real things in our increasingly absurd world. It's a good occasion to think about one of the most powerful conceptual tools you can learn to work with: the map-territory distinction. Or to use Big Philosophy of Science Words, the distinction between models and phenomenology. Many April Fools jokes work by exploiting map-territory distinctions, but on other days, failing to grok this distinction can lead to much more serious consequences. In some ways, map-territory philosophy is the biggest concern of our time. From Deleuze and Guattari's famous idea of "striated and smooth" (which you can think of as "map and territory") to Nassim Taleb's ideas of antifragility, and from deep learning technology to hacker wisdom, map-territory philosophy is everywhere you turn. Disruption theory, Boydian competition theory, mindfulness meditation: map-territory ideas are at the heart of all. And closer home, the very idea of "breaking smart" is about playing map-territory games for fun and profit. So here's your introduction. 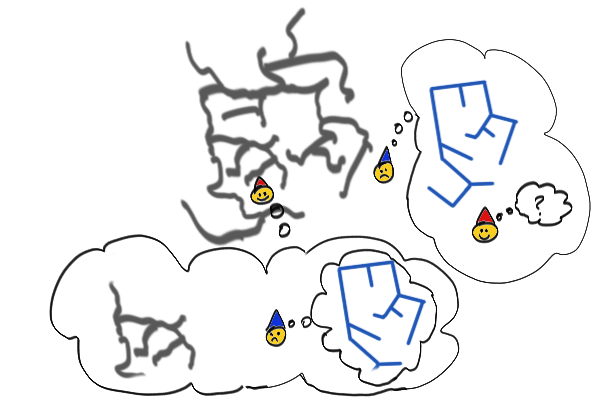 1/ When you break a wall in your map, you have an incorrect map. If you navigate by that map with your eyes closed, you might run into a wall.

2/ When you break a wall in the real world, you make a new path, and render almost everybody else's maps incorrect.

5/ We also make maps of others' behaviors ("here be buttons! drill at X for nerve!"). This is the basis of all competition. More on that in a bit.

6/ A map is a simplified model of directly experienced reality, which is often referred to as phenomenology in philosophy of science discussions.

7/ Maps are efficient and useful for a simple reason. They reduce the need to pay mindful attention to phenomenology via your senses. It's cheaper to live in your head than in the world.

8/ Paying attention to phenomenology is much more expensive than listening to a model in your head. A good map can lower the cost of action by orders of magnitude.

9/ But there's a cost. When reality changes on you, costly failures can occur. Examples: Business disruption, crashed credentialist careers, and the Republican party getting Trumped.

11/ A personal example. As a kid, I learned to play the tabla via sheet-music exercises, and never learned to truly "sense" the drumming. This lead me to lose interest and quit.

12/ In adulthood, a friend who'd just picked up tabla skills by ear and feel commented that my playing sounded metronomic. He suggested I just "listen and play with loose hands."

13/ The advice came too late for my stillborn music career, but I've since deeply internalized the idea of "listen and play with loose hands."

14/ To "listen and play with loose hands" is to operate via phenomenological awareness and tacit knowledge that hasn't been organized into maps in conscious awareness.

15/ This is what German WWII military strategists called Fingerspitzengefühl  or "finger-tip feeling" (quite literal in drumming).

18/ Feedback is focused measurement to generate an error signal that is legible in terms of the constructs of a map, allowing the map to be corrected.

19/ A thermostat for example, measures "temperature" which is a legible variable in an HVAC (heating, ventilation and air-conditioning) model/map of a room.

20/ Even if a thermostat could measure other things like "peeling paint due to dampness," a standard HVAC model cannot make sense of, or use, that information.

21/ A pure map-based navigation strategy is what control theorists call open-loop. You assume the map is the territory, and navigate by it, eyes closed. It is very cheap: a decision to not pay attention.

22/ Error-feedback gets you to a closed-loop strategy, an incremental improvement that is much costlier. It allows you to budget attention based on what your model assumes is important. Eyes wide shut.

23/ One way to understand this is to note that a typical feedback loop (such as a thermostat) instruments the map rather than the phenomenology the map models.

24/ A feedback loop extends a map in space into a map in time via automation. Paradoxically, it can make a map more blind by "allocating" certain signals to specific uses and driving them subconscious.

25/ But finger-tip-feeling based navigation tries to eliminate explicit maps from the loop altogether and "instrument the phenomenology" so to speak. Eyes open.

26/ This is incidentally why recent advances in deep learning technology are so significant. They can instrument phenomenology rather than models. They can sense-make "peeling paint" situations.

27/ In finger-tip feeling based navigation, rather than budget attention based on assumed priorities, you deploy attention without importance/priority judgments. This is a stage that precedes map-making.

28/ It is vastly more expensive (which is why monks don't do much). A cognitive capital expense of sorts. But it can achieve radical improvements in the long term. Why and how ?

29/ An irrelevant map requires a LOT of expensive error feedback to just barely function. It might even be worse than no map. A relevant map otoh, might be able to function with little or no feedback.

30/ Suppose you're doing a parkour run, but only have a road map for cars. You can't just "error correct" your map with an eye-to-sharpie-marker feedback loop in real-time.

31/ If you tried, your map would end up unreadably scrawled with additions/deletions and still fail to express some things, like staircases that go up, or fences that can/cannot be climbed over.

32/ To truly take advantage of being on foot, you have to throw it away and relearn the territory as a climbing, bipedal ape.

33/ This insight is at the heart of my favorite practical introduction to Boydian theory and maps/territories, Geoff Manaugh's blog post on the movie Die Hard, Nakatomi Spaces.

35/ In conflict, you don't win with a "better" or "more detailed" map than the adversary, since "better" means different things to different people with different objectives.

36/ You win by using finger-tip feeling to find exploitable weaknesses in the adversary's map. Fight the enemy, not the terrain, as uber-strategist John Boyd once said.

37/ A feedback loop is in some ways worse than an open-loop map in conflict. It represents an automatic, subconscious habit that can be turned against itself, causing compounding damage.

38/ This is the essence of Boydian "getting inside the decision cycle of an adversary" -- exploiting the feedback-amplified map-blindness of the adversary.

39/ The cartoon above illustrates this. Red is operating with finger-tip feeling, and has a map of Blue's map. Blue is map-blind, and also has no idea what Red is thinking. Advantage Red.

40/ Finger-tip feeling is not a one-time investment. Because environments and priorities can shift constantly, you always have to allocate some attention to "finger-tip feeling" of the territory.

41/ Think of it as cognitive basic R&D. A kind of mental hygiene that occurs at a level of consciousness below the explicit-maps-and-models level.

42/ Of course phenomenology is not reality. It is our experience of reality, limited by senses and subconscious mental models. So you need to constantly improve your Fingerspitzengefühl  through practice and deepening self-awareness.

43/ If you, like me, are prone to map or model addiction, the challenge is particularly hard, because you're naturally inclined to live in your head rather than in your eyes, ears and fingertips.

44/ As a kid the walls of my room were covered with National Geographic and other maps. I loved encyclopedias and catalogs. As an adult, I spent 15 years doing specialized kinds of model building.

45/ Unlike natural athletes or dancers, I came to value Fingerspitzengefühl  late in life, in my early 30s. Ironically via a research project devoted to studying map-territory gaps with formal models.

46/ One insight from that work was recognizing the value of multiple models -- the fox way. When multiple models collide, phenomenology tends to win over all of them. You can see reality through the debris.

47/ But while there is definitely a skill component, and value to "finger tip living" nature and nurture, you can realize much of the benefit simply by deciding to value phenomenology above maps.

48/ Books like The Inner Game of Tennis and  The War of Art can help, but the main thing is to simply learn to enjoy living in your finger-tips, ears and eyes more. It is easier than you think.

49/ If you want to start today, April Fools jokes are a great source of practice. Rather than worrying about getting pranked and looking silly, just pay attention to how each joke works.

50/ I bet, when you do, you'll find a few interesting maps and territories, and dissonances among them. For example, many learned today that the Gmail Send button is a map of a button rather than a button.