I have noticed a feature in my use of digital products. As a single-player producer with an awareness of my own areas of expertise and learning interest, I like my products to have lots of capabilities and very few baked-in decisions about how they should be used. Wordpress and Scrivener are publishing tools that fit that description. As a single-player consumer with clear awareness of my areas of ignorance, I like my products to have lots of capabilities, but also lots of visible baked-in decisions (as opposed to invisible background ones) that suggest, without dictating, how the remaining free decisions should be made. These are opinionated products. Freshbooks (invoicing software) and Typeform (a form builder) are examples of opinionated products. I call decisions that I can see and take my cues from, but not make myself, signal decisions: they constitute the DNA of the product brand, and serve as the basis of trust in the product maker. Signal decisions are particularly crucial for digital products because they tell users how the future evolution of the product will be governed.

The difficult case is products where you are a prosumer, one among a bunch of amateurs in the multi-player community of users around a "democratized" capability that previously used to be the preserve of expert single-player producers and consumers. The trick to democratizing a capability well is to not just build opinionated technology, but politically opinionated technology. When you do this well, people come for the tool, but stay for the network, as Chris Dixon put it (I am borrowing the single/multi player terminology from the linked post). When you do it poorly, you get a toxic shitshow. 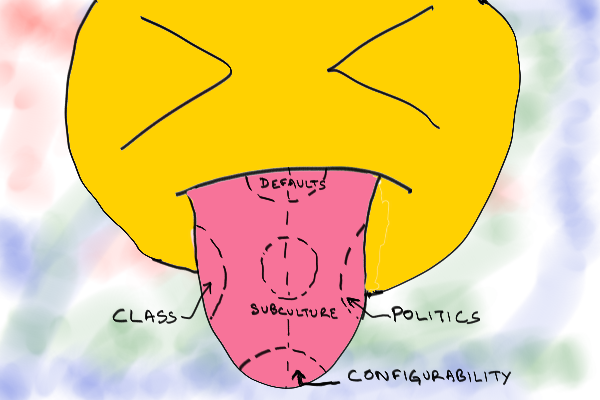 1/ Bad technology isn’t technology with too few capabilities or too many capabilities. Such products tend to fail as a simple matter of ignorance of what the market actually wants.

2/ Such under/over-engineered products either get quickly absorbed by a bigger product, or quickly disrupted by a simpler one.

3/ Bad tech tend to reflect clear understanding of what product people want, but willful ignorance of how they want to use it, and ideological resistance to learning.

5/ Or worst of all, the product makes the wrong signaling decisions  -- visible baked-in decisions (example, a like button but no dislike button) that users take usage cues from.

6/ Technologies that advertise themselves as "democratizing" a capability often manage to be bad in all three ways, but particularly in how they signal.

8/ Twitter and Medium are examples of "democratizing" products that signal very poorly. You get no cues about how to lead or follow well, so the products struggle.

9/ Slack is an example of a democratizing product that signals well. It is fairly clear how the designers think you should play leader of follower when using a slack.

10/ When technologists say “democratization of capability X” it is often a sign that they have no idea how to put it to good use. They lack taste around their own creations.

12/ The result is products that leave users with too many burdensome decisions, and too few empowering ones. Every product gets the mix wrong in the beginning.

13/ Non-digital products have fewer user-level decisions in the design, and less emergent "democracy" around use, so they tend to iterate to the right mix fairly quickly.

15/ Some decisions are retained for the producers (temperature, milk/coffee ratio, ice levels), others for the consumer (flavor syrups).

16/ Not so with digital products, which can offer thousands of possible decisions.In the most extreme case, digital products can be extensible, programmable, and modular.

17/ Decisions aren't freedoms. A burdensome decision is one where you have to get it right but don't care to acquire the expertise required to differentiate yourself with good decisions.

18/ A decision is a true degree of freedom for your if you care to acquire the expertise required to differentiate yourself by making it well. Otherwise it is a burden you'd rather offload to a trusted party.

19/ Usually that trusted party is the producer, but "democratization" is often code for the producer lowering costs by making fewer decisions. Democratization is also DIY-ization, unfortunately.

21/ Democratization often starts out as a wishful hope that users will care enough to make good decisions, and turns into the reality of them imitating bad ones.

22/ Here "bad decisions" are ones that erode trust in the underlying product itself and gradually drain its vitality and evolutionary vigor: the technical term is "toxic shitshow."

23/ From font choices (the original democratized decision of digital technology) to presidents, the fundamental tension in democratization hasn't changed since Athens.

24/ Why are democratized products particularly prone to this problem of bad decisions spreading and poisoning it?

25/ Prosumers tend to make burdensome decisions through imitation, and conserve attention for the subset of decisions that allow them to differentiate through expertise.

26/ Imitation is a social and tribal process, and one around which subcultures of taste emerge. So the democratization of a capability is also invariably the politicization of that capability.

27/ So long as there is a clear distinction between experts and non-experts based on knowledge, we may grumble about the oppressive defaults, but we accept them.

28/ We may complain about leg room on airplanes, but we don't generally try to reconfigure the seating. Fear of authorities aside, most of us realize we don't know enough to try safely. Yet.

29/ With the politicization of a capability, every decision that has any potential for differentiation adversely selects for those capable of making decisions that can spread well, not necessarily "good" ones.

30/ This creates, in the "democratic" user base, the equivalent of political leaders and parties around them, and decisions that gain followers faster spread more than good decisions.

31/ Trust that used to embodied by products becomes embodied by the most widely imitated power-users. A market for lemons is created: "bad" deciders drive out "good" deciders.

32/ Where product designers hope that public-spirited and altruistic "curators" will emerge, making thoughtful decisions for others to copy, politicians emerge instead.

33/ The task of a capability democratizer is daunting: to try and ensure that power users don't accrue the trust of their tribe of followers at the expense of all users' trust in the product itself.

34/ WordPress (in relation to developers, not bloggers) and Rails are examples that do politically opinionated technology well. Their signal decisions cue effective leader and follower behaviors.

35/ Twitter and Medium are examples that do politically opinionated technology poorly. Their signal decisions cue poor leader and follower behaviors.

36/ Besides the choice of what to signal with visible baked-in decisions, a big factor that makes the difference is the locus of wealth creation.

37/ In the case of WordPress and Rails, much of the value created is accessed by ordinary "outside the system" users who don't know or care that a site runs or WordPress or Rails

38/ This means "in world" political value in the form of "followers" is relatively low compared to all the value that can be accessed through the newly democratized capability.

39/ With Twitter and Medium on the other hand, almost all the value is in the form of "in world" political capital, measured through such things as follower count.

40/ Usage decisions get "currencified," so to speak, into instruments for accumulating in-world political capital, with very weak linkages to value creation outside that world.

41/ We've been at this long enough now (40 years!) that the basic challenge of good politically opinionated technology is clear, and capability democratizers who fail to recognize them have no excuses.

42/ It's three things that are simple to state, but hard to act on: make good signal decisions, take responsibility for emergent social outcomes, create more value outside the system than inside.

ps. I am recovering from a cold, and rather foggy-headed, so apologies if this newsletter is a bit more of a garbled brain dump than usual.