Premature Synchronization is the Root of All Evil

"Thank god it's Friday."
"It's August, everybody is on vacation."
"Did you watch the synchronized diving at the Olympics? Beautiful!"

Our civilization runs on synchronization: the expectation that certain things will happen in fixed places and times relative to other fixed places and times. For thousands of years, human life was attuned to the rhythms of nature. Then for a few hundred years it became attuned to the rhythms of industrial technology.  But now that we've invented post-industrial technology, whose fundamental nature is to drive desynchronization, we've come to appreciate a profound point: premature synchronization is the root of all evil (with apologies to Donald Knuth). If you, like me and most people under 50, have developed a strong aversion to being called on the phone for things that could be handled via email or text, and have replaced appointment TV with binge-watching on your own schedule, you have a sense of what's happening, why, and why it's a good thing. 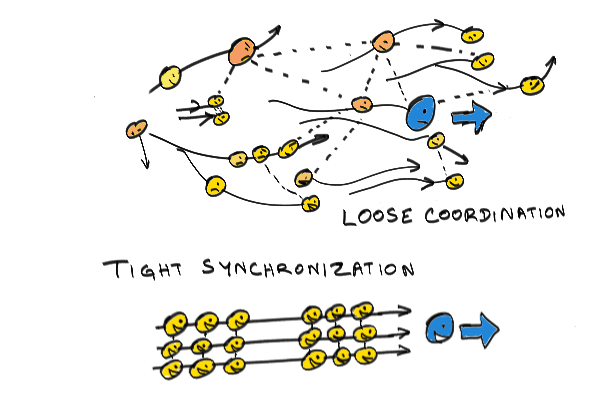 Premature Synchronization is the Root of All Evil

1/ During the 2002 Millennium Challenge War Games, Lt. Col. Paul Van Riper of the US Marine Corps led the Red Team to victory over the Pentagon's Blue Team

2/ The Blue Team was expected to win on the basis of advanced "network-centric warfare" (NCW) technologies. They lost to guerrilla action that relied on radio silence and motorcycle messengers.

3/ It wasn't that NCW technology was bad. It was that it was being used with inappropriate mental models. Van Riper would probably have won even more overwhelmingly playing Blue.

4/ Buried deep in NCW doctrine documents, we find a clue: the "theory" of NCW developed in the 90s relied on the hypothesis that tighter synchronization would lead to better shared situation awareness.

5/ This shared situation awareness, so the theory went, would lead to more effective coordinated action. A bullshit theory as it turned out.

6/ Van Riper was a Boydian, steeped in the post-WW II tradition of maneuver warfare, and the thinking of Col. John Boyd, whose influence had strongly shaped the Marine Corps.

7/ I had a chance to visit the Boyd archives at Quantico a few years back, and among the papers I found an NCW doctrine paper with Boyd's markups.

8/ He had scrawled "NO!" next to every occurrence of the word "synchronization."
Why did Boyd, as his colleague Chet Richards confirmed to me, "hate synchronization"?

9/ There are many great reasons to dislike synchronization, and only a few good reasons to favor it. If you have to pick a default, it should be "loose coordination." Why?

10/ Humans are of very low value as cogs in a machine doing identical things in interchangeable ways, on the same clock, on the basis of identical kinds of training to graded levels. That's for robots.

11/ Humans are most valuable when they have high autonomy, and able to play to their unique strengths and histories, particular sensitivities, op-tempos, and patterns of privileged information

12/ The idea of "wisdom of the crowds" in fact rests on humans having diverse, unique private knowledge bases (foxy!). The madness of crowds kicks in with synchronization and imitation (hedgehoggy!)

13/ Why desynchronize in space? If you are marching in a straight line on a road, and your buddy is clambering over rooftops roughly parallel to you, should he try to move in strictly parallel ways? That would be dumb.

14/ Why desynchronize in time? Different kinds of work have different time constants and generate actionable information at different tempos. Different people are in different emotional states at the same clock time.

16/ Such practices are great for log-dumping daemons (background bot programs) or robots doing scheduled maintenance. Not so much for humans.

17/ Is there any good reason to synchronize at all? Yes to automate, scale, and amp-up power output. Things that need to behave like laser beams are good to synchronize.

18/ For humans this means rare occasions when you need to get everybody on the same emotional page, amped up and ready to fight, forged into a single mass of directed energy. Sales conventions and religious holidays display this.

19/ For machines... well. This is what turning anything into a "cloud" involves, whether it is datacenters or fleets of on-demand driverless cars.

20/ Even with technology though, sufficiently intelligence in machines drives diminishing returns from synchronization. Datacenters are being "desynchronized" these days with respect to hard-disk age.

21/ In the Iron Man movies, the villain in Part 2 produces masses of identical robots marching in rank and file. In Part 3, Tony Stark produces a creative and loosely coordinated explosion of varied robot designs.

22/ A principle called Ashby's Law of Requisite Variety gets at why systems must be desynchronized in order to embody the variety required to thrive in complex environments.

23/ Another guiding principle: sufficiently advanced technology is indistinguishable from nature, and nature revels in variety and complex textures of desynchronization overlaying base rhythms.

24/ But let's boil this down to practice. How do you practice desynchronization? Is lean/agile desynchronized? Is merely dumping annual performance reviews enough?

25/ Last week we looked at one of the 4 key elements of Blitzkrieg,  Fingerspitzengefühl. What we're talking about here is another key element: Auftragstaktik, which I loosely translate as "missionary tactical contracts"

27/ In tight synchronization, you're on the same clock as everybody else, fit yourself into the same templates, report up the same chain, and communicate via standard protocols.

28/ This laser-beam like synchronization is a VERY expensive thing, and the cost is not money (money is cheap): it is time, creativity, unique knowledge, sensitivity to the environment.

29/ A laser beam is a thing of great power, and comes with great responsibility. Use it as sparingly as possible, as late as possible. And when you do, make it count. The null hypothesis is that Darwin knows best.

31/ Making it count means this: in the few spots you choose to put in synchronization, breaking the installed habit should be a fireable offense. Uninstalling a major habit should require or precipitate an existential crisis.

32/ Elsewhere in loose coordination regimes, you trust people with high autonomy, and expect them to work out much more meaningful and dynamic mutual expectations and working tempos for themselves.

33/ The principle behind missionary tactical contracts is that the context is a specific mission. Patterns of coordination should not make sense outside the mission context.

34/ A bastardized form of this idea exists in "matrix" organizations along the "project staffing" axis, but that's really a perversion. It ain't a true mission if it is crossed with a line management axis.

35/ Mission also implies missionary, as in holy cause. The heavy lifting is done by high levels of mutual trust, shared values anchored and embodied by the very few "laser beam" habits.

36/ It is not done by torrents of communication and documentation and heavy burdens of continuous inspection and monitoring.

38/ How do you get there? A precondition is strong trust, forged via shared battles. This is necessarily developed iteratively, one battle at a time. This is Einheit, the third element of the Blitzkrieg model.

39/ How do you prevent the lack of synchronization structures leading to tactical chaos, anomic messiness and constant FUD (fear-uncertainty-doubt)? This is the job of the leader's direction setting, the fourth element: Schwerpunkt.

40/ Are frameworks like lean in the spirit of missionary tactical contracts? Yes and no. Yes, because relative to things like waterfall planning, these models are fundamentally biased towards loose coordination.

41/ No, because they are often hijacked by cargo-cultists who turn them into vehicles for a different flavor of tight synchronization, getting religious about daily standups, sprint meeting agendas, 15 pieces of flair, and so on.

42/ In most agile frameworks, unstructured, open communication is expected to bear the burden of coordination, rather than documentation and reporting.

43/ But in bad agile environments it can turn into high-volume noise channels, or worse, silences of mutual suspicion and strongly diverging beliefs and commitments.

44/ If there is high trust, a strategically sound direction, and effective missionary contracts, all communication should be possible, but not much should actually be necessary most of the time.

45/ The communication that actually happens should be a strong function of relevant events in the environment worth processing and responding to.

46/ Putting it all together you get Andy Grove's famous dictum: first let chaos reign, then rein in the chaos. In our terms, let trust and missionary tactical contracts develop in war-mode, then turn on a laser beam or two.

47/ This broad philosophy is deeply ingrained in Silicon Valley management philosophy. And through its products, it is affecting all aspects of culture, whether through binge-watching TV or don't-call-me phone norms.

48/ To many, this is a sign of a decline in culture. I recently stopped going to a cafe where the owner was being decidedly cold to anyone working alone with a laptop, even when the cafe was empty.

49/ She apparently wants the cafe to be a place for  warm, intimate, "real" interactions among 2 or more people. She's in the market for cultural laser-beam rental, which I think is in decline.

50/ What does this mean? It means that perhaps, we've had far more synchronization than people actually want or need in life. And now that work doesn't demand it, we're doing less of it.

51/ Sure, we'll all settle into different comfort zones, but the era of civilization being effectively a parade of people marching lock-step to the tune of priestly chanting or military marching bands is over.

52/ Welcome to atemporality. So long as you thrive on loose coordination rather than tight synchronization, it's a beautiful thing.