As I write this, we're formally changing lanes into the Bizarro Earth timeline. Over at Davos, Chinese President Xi Jinpeng  kicked off the 2017 World Economic Forum meeting with the sort of pro-free-trade, pro-neoliberalism speech one would expect of a Reaganesque American President. In Washington, DC, Donald Trump grumpily assumed office with a bleak strongman speech, the DoD having denied him the sort of tanks-and-missiles inaugural parade that we normally associate with communist autocracies. And of course, around the world, the anti-globalization Left, the World Social Forum crowd, is reacting by trotting out its warmed-over twenty-year-old mantras and tired socialist manifestos.

As we get oriented in this new normal, one thought above all is dominating my thinking: a pox on all three of these terrible, impoverished, exploitation-centric views of Earth, all equally devoid of imagination and a sense of adventure. Davos Planet, Trump Planet and WSF Planet are all awful, oppressive places I don't want to live in. It makes little difference whether it is Bond-villain bankers, cartoon ethno-nationalist strongmen, or last-century's Newspeaking socialists doing the planet-trashing.

It's a good time to re-assess your relationship to Planet Earth, and as it happens some personal travel is coming up for me at a convenient time for such reflection. I will be traveling in Asia for the next 2 weeks. I have a meetup scheduled in Singapore on the 25th at 10 AM, and I'll be in Seoul Jan 31 - Feb 2. I hope to meet some of you. Email if you're in either Singapore or Seoul and would like to connect.

But let's talk about a fourth way. An alternative to Davos Planet, Trump Planet, and WSF Planet, best represented by the Lonely Planet travel books: an adventurous view of Earth rooted in hitchhiker sensibilities, shoestring budgets, and simply being present on this planet rather than on a map or org-chart of it. 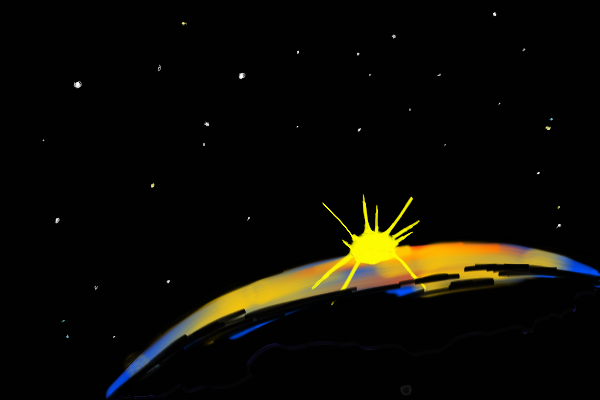 Earth as photographed from space by me aboard the Ribbonfarm One Spaceship, 2040.

2/ Few of us will ever see Earth from space, but the next best thing is backpacking. When you bum your way across many borders at under $30/day, you understand the planet at a planetary scale.

4/ In many ways, I learned far more about India during my first year abroad than I had in 22 years of actually living there. Perspective is worth 80 IQ points as Alan Kay once said.

5/ In 1998, a year after moving to the US, I landed in Paris with a backpack, armed with a Lonely Planet guide, a Eurail pass, and an International Student ID card.

6/ Over the next 3 weeks of backpacking on a shoestring budget, I learned more about the US than I had in the previous year, and began to understand "Earth" as more than an abstraction.

7/ The view I began to develop back then was neither the Davos view, nor the Trump view, nor the WSF view. It was a worm's eye, middle-class and blue-collar experiential globalist view.

8/ Over the 3 weeks, I hung out with Chinese students, British bartenders, Mexican engineers, and retired Japanese clerks.

9/ I hung out with Bangladeshi construction workers on a train from Paris to Rome, an American hairdresser in Florence, and Rajasthani folk musicians in Brussels (they were there to perform at the 1998 Soccer World Cup).

10/ All were traveling on shoestring budgets. I met no rich bankers, industrial magnates or celebrities. I also did not meet neo-Nazis, scary secret police or anti-WTO protesters.

11/ In 1998, I began developing a rest-of-us globalist sensibility, shaped by curiosity and an exploratory urge, not ideology. The planet as seen without WEF/Trump/WSF glasses on.

12/ This is the Lonely Planet. It is lonely because you have to take off your ideological glasses to see it, something few people are willing to do. It feels empty even in crowded parts of it.

13/ Earth is a planet that has been colonized fully by humans for about 20,000 years, and fully accessible to non-elites for about 20 years, yet remains largely unseen by most.

14/ It never ceases to amaze me that in 2012 there were over a billion tourist arrivals in a foreign country worldwide. And it saddens me that so few actually leave home mentally.

15/ Though only a tiny fraction -- less than 3% -- of the world will ever leave their home countries, it is a mistake to think of "globalism" as an elite thing.

16/ Davos is a tiny minority within globalism. Globalism includes people of all classes and income levels, doing all kinds of work. You don't need $20,000 to "attend" Planet Earth.

17/ The globalist sensibility is one that strives to extend its sense of home to the whole planet. Developing this sensibility is not an elite privilege. It only takes curiosity and $30/day.

18/ It is the Davos set that is the minority in the globalist crowd, just as it is the jingoistic "ours is the best country" tribals who are the minority within modern liberal democracies.

19/ While I did not become a globalist as a  blue-collar migrant worker, neither did I become one as a jetsetter with inherited wealth to burn on first-class, 5-star globalism.

20/ I had lived extremely frugally during my first year out of India, and saved nearly half of the approximately $12,000 I'd earned as a teaching assistant in that first year.

21/ During my 3 weeks in Europe, I blew half my savings -- a full quarter of my earnings for the year --  on my backpacking trip. The other half went towards my first car.

22/ That $3000 (airfare included) was one of the best investments of my life. In the 19 years since, I've traveled a lot more, and in greater comfort, but the seed was that first trip.

23/ It is easy to get caught up in learned helplessness when it comes to matters on the scale of a planet. Yet, in 2017, the planet is not the playground of the rich and powerful.

24/ We often talk of poverty in terms of income under $2/day. Backpacking at <$30/day, is way more expensive, but it's not billionaire territory. It is billion-humans territory.

25/ Unless you are truly in the bottom billion of wealth and privilege, the only thing it takes to make the whole planet your home is the desire to do so.

26/ You don't need to jetset globally every year to be a globalist. A single stiff dose of planet-scale imagination expansion is enough. Do it right, your mind will not shrink again.

27/ International travel and living abroad, of course, is necessary, but not sufficient, for developing a globalized mindset. Your mind has to be willing to follow your body.

28/ There are hidebound nationalists who travel abroad, viewing everything beyond their borders with some mix of fear, suspicion, contempt, and envy, and return home radicalized.

29/ There are narrow-minded profit-seekers, devoid of imagination, who globetrot in private jets, yet never see anything other than opportunities to buy low and sell high.

31/ These are all people whose bodies may circle the planet, but whose minds never leave their hometowns, their yacht clubs, or their little enviro-socialist radical circles.

32/ Lonely Planet globalism is about roaming the planet simply to experience it, without extracting, exploiting, fighting, killing, or protesting. About simply being present on Earth.

33/ In 1998, there were no smartphones. I didn't have Google Maps and Google Translate apps at my fingertips. There was no easy online fare-shopping, no Airbnb.

34/ In the two decades since, the infrastructure of globalism has deepened enormously and gotten vastly cheaper. Yet our imagination seems to have shrunk.

36/ Today, despite the vastly improved state of global connectedness, we are still afraid to simply grow up and into the world we've created for ourselves.

37/ Davos Planet, Trump Planet, and WSF Planet have fully colonized our imaginations, leaving no room to even look around at our planet, let alone imagine better futures for it.

38/ There is not actually that much difference between the Davos and Trump views of the world. They are already beginning to get comfortable with each other.

39/ Beneath shallow differences, they share a deeper bond: a view of the planet as a private cache of loot to be exploited for the benefit of a small minority of humans.

40/ Both Planet Davos and Planet Trump are happy to improve some "nice" parts of the planet for themselves, while trashing the rest of it through unchecked extraction.

41/ As Vilifred Pareto argued a century ago, it seems the elites always rule. Whether it is Davos elites or Trump-Putin elites doesn't really make much difference.

42/ But the alternative is not an anti-globalist, socialist reaction of the sort embodied by the  WSF, focused almost exclusively, and mostly uselessly, on oppression and environmentalism.

43/ The WSF may not have as much power as Trumpism or Davosism but is ultimately no better than either. Its imagination is limited to mindless localism and uncritical preservation.

44/ What is the alternative to these deeply limited relationships to the planet, entirely defined by particular geographic, nation-based, or class-based ideological maps of it?

45/ The alternative is to rediscover the Lonely Planet. To boldly go where basically anyone can go, and learn to actually be present on the planet, actually see it again, together.

46/ For many of us, the coming years are going to be a psychologically draining time, living in a cultural zeitgeist within which our way of being present on the planet is seen as "evil."

47/ The Lonely Planet mindset, simply by refusing to draw boundaries on maps and class pyramids, casts itself as the Enemy to every other kind of globalist mind.

48/ Planet Davos would like us all to be mere pawns driven by economic necessity, flowing like just another form of capital to where we're needed, like machinery or oil.

49/ Planet Trump would like us all to sing national anthems, and stay within our borders, except to go to war with other nations, screw them over on trade, or beat them at sports.

50/ Planet WSF would like us all to huddle in solidarity, not daring to move, trying not to change at all, eating locally sourced produce and scuttling all planes and ships.

51/ If you feel the life-energy draining out of you at the prospect of the actual planet being torn apart in a war among these 3 false utopias, you have a choice.

52/ Option 1: You can grit your teeth, memorize the manifesto of the least-objectionable of the 3 dystopias, and make the best of it. It won't be fun, but maybe others will have even less fun and you can enjoy that.

53/ Option 2: You can decide to actually experience the Lonely Planet to the best of your ability and budget, and learn to develop a sense of home within all 197 million square miles of it.