You've probably seen a movie or detective show with this plot arc: a serial killer or bomber throws down a personal challenge to our genius detective, posing a series of deadly puzzles/challenges, accompanied by sneering taunts. At some point, as the bodies pile up, the frustrated and angry detective says something like "I'm tired of him always being two steps ahead of us; time for us to make HIM react!"

Real life is like that, except at a slower tempo. There may not be bodies piling up, but it is worse in some ways: in addition to frustration and anger, you get chronic stress and anxiety building up. Years of passivity and letting life just happen to you on other people's terms is costly.

To seize the initiative is to dictate the logic of a course of events when others in the game also have free will. To be constantly in a reactive mode, never being the one taking the initiative, is a fundamentally dangerous thing, even when you're not fighting an evil genius adversary who's all up inside your OODA loop. It is dangerous even in dealing with friends and family who might genuinely intend to act in your best interests. The thing is, only you can truly act in your own self-interest, and indeed, have a responsibility to do so. This is the deeper reason pure reactivity is a lousy life default. It's more than a way to lose often. It's a way to be (or gradually turn into) a loser at the level of character: someone of no use to anyone.

A good mnemonic to remember this is an arm wrestling contest, one of the simplest possible examples of striving for your own self-interest. When you have the upper hand in arm wrestling, you actually have more control and agency relative to your strength and leverage, due to the logic of how arm muscles and bones are arranged. Strength/leverage being equal, the person with the upper hand will generally win.

So let's talk about why and how you should seize the initiative whenever possible, and cultivate a growing capacity for self-interested action.. 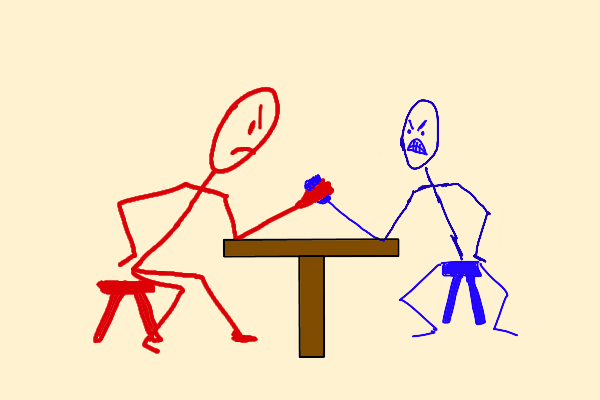 Arm wrestling is a good mnemonic for the relationship between self-interest and initiative.

1/ How long things take has little relation to how much they matter. Swallowing an optional vitamin and a life-saving pill take the same few seconds. Fixing a minor corner case bug and a system-crashing major one might take the same time.

2/ The  weak correlation between importance and time is why pure reactivity is bad. Your actions become driven by stimulus-response clocks rather than judgment of importance.

3/ We default to reactivity because reacting is easier than acting on your initiative. It takes less imagination or judgement. Somebody has made a neat little to-do for you.

4/ When you react, your attention/energy allocation is determined largely by how long things take. Greasing squeaky wheel, sweating small stuff.

5/ By contrast, when you act instead of react, you have more control. You can outsource and automate more easily. You can learn more strategically from mistakes and surprises.

6/ You aren’t as locked into time commitments determined by others’ plans because you can tweak the plan itself, deciding what requires care and what can be neglected.

7/ You can’t entirely escape time. Execution is after all just a set of reactions to the consequences of your own intentions. And the mere fact of volition doesn’t make popping a pill or driving a mile take less time. The difference is, it’s leveraged time.

8/ What do that mean? It means you capture more of the positive, designed consequences of your own actions and escape more of the negative ones.

9/ You've used logic (whether agile experimental or fragile Rube Goldbergian) to shape causation in your favor. Rationality is time/attention/energy leverage, but it needs to be underwritten by the courage of seized initiatives to work.

10/ You can’t “manage” time. You can’t even “manage” attention or energy outside of a fairly narrow band. All you can do is limit the number of things you choose to react to and seize the initiative more often. Create more room for YOUR logic to work, over that of others.

11/ Even the most benevolent person cannot always structure the logic of action to benefit you. The logic of their own needs will ALWAYS contaminate the reactivity pattern they impose on you, and there is ALWAYS a limit to how deeply they can grok the hidden logic of your needs.

12/ Parents, spouses, teachers, priests, bodhisattvas, social workers, doctors, AIs that read your emails, Google, coaches, therapists... nobody can set up your actions to be purely shaped by the logic of your own needs. Self-interest cannot be truly outsourced.

13/ Only YOU have access to all the information, conscious, unconscious, and subconscious, to act with self interest. Only YOUR thinking is uniquely air-gapped and firewalled away from others’ interests allowing actions based on that particular set of information. Self-Interest is a responsibility.

15/ You know what is worse than being wrong and failing? Being right and failing. That is often what happens when you fail to seize the initiative. You become complicit in others' avoidable mistakes, inspite of knowing better.

16/ This is of course the familiar logic of "I was just doing my job, he's the one responsible." This is the opposite of the principal-agent problem. The agent executes bad orders knowingly, in good faith, because they lack agency, courage, or both (or of course, they might secretly be an adversary, happy to help you fail).

17/ You can perhaps walk away when it's just a job. At most you knowingly wasted some time in futile or doomed work perhaps. But you might also, by taking the initiative and disobeying a bad order, save the world from nuclear war like Stanislav Petrov in 1983.

18/ The same logic applies at a personal level. You can walk away from responsibility for executing bad decisions at work perhaps, but you have to live with the consequences of letting others make bad personal life decisions for you.

19/ Your refusal to react as I want reshapes my attempt at leveraged action. It forces me to contemplate the use of power and coercion to get my way. If I choose to use those, I’m being selfish rather than self-interested. Your self-interest is what helps me detect my selfishness.

20/ It also frees up space and time for your attempt at leveraged action. When you say "No!" you also create an opportunity to say "Let's try my way instead." You trade the anxiety of reactivity for the eustress of real responsibility.

21/ Anxiety is, in a way, conflict-aversion debt. When you consciously curtail self-interest and avoid responsibility, you let conflict debt accumulate in relationships. Your subconscious recognizes this and mints AnxietyCoin in your head to represent deferred conflict debt.

22/ Anxiety is a very poor way to process improperly expressed self-interest, since it does not carry the logic of leveraged time/action. So it just sloshes around screwing up all behavior somewhat randomly. Problems inappropriately expand to occupy anxiety available. Inflation.

23/ Anxiety particularly leaks into reactions, because cues to react trigger our subconscious awareness of our insufficient self-interest. Yes, you read that right. There’s not enough self-interest in the world.

24/ Not enough people have the skill, self-awareness, and most importantly courage to fulfill their responsibility to be self-interested. Self-interest is not a natural and automated intuition. It’s a learned skill and an expression of nerve.

25/ The opposite of self-interest is not altruism but anxiety and unchecked excesses on the part of those who need your self-interest to recognize their selfishness and be forced to face the coercion and power they’re deploying.

26/ What they do with that is their moral dilemma. They may choose to change or not. Your job is to create that moral dilemma. That’s ultimately the stakes riding on your reactivity. Be self-interested, or be part of the problem.

27/ None of this should be read as an endorsement of some sort of attitude of sovereign self-interest. This model of self-interest is best expressed in relationships of mutuality with others. In fact, it is the flip side of effective mutuality.

30/ Never seizing the initiative, and always being reactive, is a way to ensure that long-term, you are I-lose-you-win mode, or worse, I-lose-you-lose mode, when a little initiative could have brought your unique strengths into play, creating more wins for everybody.

31/ But you can aim to be somewhat Carpe Diem, some of the time at least. Enough to keep self-interest alive and healthy.

32/ Self-interest and true mutuality are two sides of the same skill. Both atrophy without adequate expression and exercise. Neither can exist without the other.

33/ So ironically enough, if you truly want to be altruistic and do what's best for others, you have to be start by being self-interested. You can neither help, nor be helped if you lack the courage to do that.

34/ I've focused here on initiative and reactivity, but if this vein of thinking interests you, you can find some good general background in The Courage to Be Disliked.