Apologies for skipping two newsletter issues in a row. Travel, a spike on the consulting front, and the blogging course I just finished teaching got in the way.  Also, I've been absorbed in some useless deeper projects that I can't talk about, and couldn't come up for air.

Speaking of teaching and deep projects, let's talk about deep work. The phrase is the title of a book by Cal Newport who, not coincidentally, has built a career out of sincerely and effectively steelmanning what I've often disparaged as "credentialism" in my writing. He's previously written books on how to be a straight A's student, "win" high-school, and ace college. He's now a professor at Georgetown (clearly he can walk the talk). His deep work book apparently argues (I haven't read it) that you ought to stop wasting time shitposting on social media and turn that straight-A's work ethic from your student days into adult achievement via focused superego-certified effort.

Newport preaches and practices what used to be called the T-shaped work ethic -- breadth on top of depth -- back when I was in grad school. He's a textbook T-shaped person. If that appeals to you, by all means turn off social media and go do deep work. If on the other hand, you're a hopeless Internet reprobate and consider a day without at least 5 cat gifs and 1 flame war a wasted day, you may want to pursue a different path to deep work: be a semi-colon shaped person. 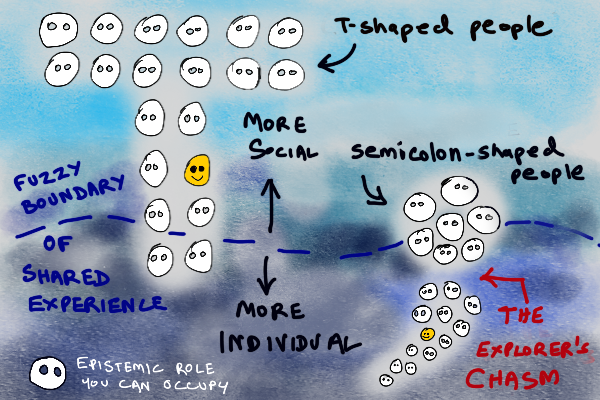 1/ Cal Newport is the latest in a long line of champions of an upstanding-citizen work ethic represented by the archetype known as the T-shaped person.

2/  Back in grad school 15 years ago, I read a book called Tomorrow's Professor by Newport's spiritual predecessor, Richard Reis (and clearly learned nothing from it).

3/ In it, I encountered the idea of a T-shaped person. Reis' model was that you ought to have a broad understanding of adjacent fields and a deep understanding of your own to be a "good" academic.

4/ You've probably heard the phrase. T-shaped people are what  career counsellors and HR people have in mind when they talk about "talent." Not just depth in craft, but breadth in vision.

6/ The horizontal bar represents your socialization as a knowledge worker. It overlaps with others' horizontal bars, enabling you to communicate across specialist disciplines.

7/ You can think of the T as spanning knowledge/skill based roles you could occupy. It's your intellectual home. T for turf. T for territory. T for textbook.

8/ People who have a highly socialized, institutionalized, and territorial understanding of knowledge and work love the T-shaped-person idea. Academics particularly love it.

9/ In Freudian terms, T-shapes are how your superego thinks you ought to work. You find your T, make friends and find collaborators along the bar, and dive deep along the stem.

10/ All the while staying harmoniously connected to your intellectual community oriented around a shared sense of "up" and directing your work "down" in the mines.

11/ So long as you stay in your digging lane indicated by the stem, you'll also be a good citizen of a knowledge economy, respecting others' expertise, and quietly proud of your own.

12/ T's stack and overlap nicely. They can be used to build stable big structures, with good redundancy properties and natural paths of career development.

13/ In a knowledge map covered by overlapping T's, your T can grow bigger or sink deeper. Your stem may be in your mentor's bar. Your current stem may become your future bar.

14/ T's induce natural authority relationships. If two people are trying to occupy the same turf, the one for whom the position is shallower has authority (because they can go deeper).

15/ As in Tetris, T's are easy to work with. They are fine, upstanding citizens. They chair committees, organize interdisciplinary conferences, give TED talks, and write solid books.

16/ They are nice people. To use an academic term of art, they are "collegial" types. They can afford to be. They know where they belong in the world, and it's a good place.

17/ Think T for Tenure. The American system of academic tenure is the perfect example of an institution of, by, and for T-shaped people.

18/ Don't get me wrong. Unlike empty suit types, scenesters, and pretenders, T-shaped people are people of substance. They are sincere and they do good, sometimes great work.

19/ I have nothing but respect for T-shaped types. The backstop the reliability of civilizational knowledge, and are pillars of the community in an entirely positive sense of the term.

20/ You should WANT your Statistics 101 professors, doctors, lawyers, accountants, bankers to be T-shaped. Trust in institutions is about the presence of T-shaped people within them.

21/ So to summarize. T for textbook, T for tenure, T for turf, T for territory, T for trust, T for talent. All good things. If you are T-shaped, or want to be T-shaped, more power to you. The world needs T's.

23/ Fortunately, I don't navigate by T-shaped norms. I navigate by the belief that there is an entire universe of deep knowing and doing that cannot be accessed by T-shaped means.

25/ It's definitely deep work, but throughout, Kyle was active on Twitter and social media. More importantly, the work didn't get done in a traditional institutional context. It was free-agent deep work.

27/ One of the interesting things about watching the project evolve was how it was driven by Kyle's contrarian view that the messy explosion of Javascript frameworks and libraries is a good thing.

28/ That was his Thiel-ian "secret" -- the belief, not shared by most programmers, that the Javascript jungle is a good thing for the web, not a swamp to be drained. He vigorously defends this view online.

29/ The world of Javascript is decidedly unfriendly to systematic T-shaped approaches to organizing, mapping, and navigating intellectual territories. T-shaped programmers don't do well there.

30/ It is not surprising that the evolution of Javascript, unlike that of backend computing technologies, has been strongly driven outside of academia.

31/ It is also not surprising that you need a contrarian view of apparent messiness, and a willingness to ignore disciplinary maps and categories, to navigate and build on such rhizomatic knowledge.

32/ Javascript for example, began life as an underpowered browser language and evolved into a powerful language for both backend and frontend systems in unexpected ways.

33/ To do deep work in the world of Javascript, you can't afford to be a T-shaped person. You have to be what I call a semi-colon shaped person.

34/ The dot of the semi-colon represents the anchor community for your deep work. In Gatsby's case, the world of Javascript sprawling messily across industry and open-source worlds.

35/ The curvy tail is the rhizomatic structure you explore to do something deep. It will sprawl untidily across a map built out of T's. It will offend sensibilities and violate sacred beliefs about what goes where.

36/ The gap between the dot and the tail is what I call the Explorer's Chasm. To do deep work in a rhizomatic zone, you must have a "secret" separating you from your community.

37/ The chasm is crucial. It represents a sort of epistemic estrangement from the nearest socialized zone of knowledge. This is necessary for work that is not just deep, but has truly original elements.

38/ The chasm also symbolizes the possibility that a work of deep knowing and doing does not have a necessary, pre-determined and fixed connection to a locus of socialization that "owns" the work.

39/ This means the knowledge could be subversive and challenge institutional authority. Squint a little and the tail of the semicolon might appear attached to a different dot.

40/ And finally, a semicolon is both smaller and lower in a line of text than a T. I like to think this symbolizes its capacity for a) going deeper b) being efficient at a smaller scale.

41/ Paradoxically, because being semicolon-shaped means being less attached to a default social home locus, it requires you to be more agile, nomadic, alive, and active in relating to social context.

42/ Tenured professors with status in a discipline can tune out the world and do "deep work" peers recognize as "important" before it is done (with accompanying ivory-tower/angels-on-pinhead risks).

43/ But a free agent, with no institutional safety net, no underwriting of exploratory expeditions by disciplinary consensus, and no research grants, cannot afford this luxury.

44/ To do deep work in semicolon mode, you must be plugged in, despite being fundamentally alone on your path, continuously renegotiating the meaning of what you're doing with the social context.

46/ Almost all the people I personally find interesting, and learn a lot from, tend to be semicolon shaped. This may be a personal preference, but I think there's more to it.

47/ I suspect, for T-shaped people, exploration is at best an instrumental activity that furthers their social development. For them, belongingness trumps curiosity. That's why it can stay in its lane.

48/ But curiosity ungoverned by belongingness motives does not stay in fixed lanes, seek permission to stray, apologize for wandering, or express contrition for "moving fast and breaking things."

49/ Such curiosity can be unapologetically rude, abrasive, damaging, combative, difficult, and intransigent when it conflicts with belongingness. It can appear to be spoiling for a fight for no good reason.

50/ Belongingness-governed curiosity is great for stewarding existing institutionalized knowledge and building systematically and cautiously upon it. T-shaped curiosity is the bedrock of living traditionalism.

51/ You don't need formal institutions like universities for this kind of collective knowledge environment. Even mature and developed cultural scenes have this characteristic.

52/ My co-blogger on ribbonfarm, Sarah, wrote a thoughtful account of this sort of belongingness-governed T-shaped curiosity (though I personally find her own work to be semicolon-shaped).

53/ In a way, the dominance of T-shaped people and their modes of knowing and doing are a consequence of Pournelle's Iron's Law of bureaucracy generalized to any social system.

55/ By contrast, semicolon shaped people and their modes of knowing and doing reflect a primacy of curiosity over belongingness. A willingness to sacrifice social harmony and relationships to the exploratory urge.

56/ This means, of course, that semicolon shaped people can be (but need not be, unless challenged or obstructed) socially disruptive, destabilizing, unreliable, disloyal, and a "threat to society."

57/ But on the other hand, they also represent creative-destructive potential, and the possibility of societies renewing themselves through the actions of those who don't feel strong belonging.

58/ Most T-shaped people and semicolon shaped ones probably find their own kind interesting and admirable, and the opposite kind offensive and boring. Voice people and exit people don't mix well.

59/ Most of the time, most people are (and should be), T-shaped. But in times of institutional decay, renewal, and churn, you should be asking yourself: should I perhaps be semicolon-shaped?

60/ Because here's the thing, when things are being turned upside down, and up and down are churning, the only sense of "depth" available to you is one you generate internally,