Significance Alchemy: How to turn "trivial" into "important"

There is a perennial conversation in tech circles about "trivial" versus "important" problems. Should you work on "trivial" problems like the cliched "yet another photo sharing app" or should you work on "real" and "significant" problems like climate change and inequality? There is no answer to this question, but there is a way to make the perennial conversation productive instead of futile. The trick is to recognize that "significance" and "importance" and "meaning" are manufacturable, rather than necessarily natural properties of an idea. Consider, for example, animated gifs and memes. They seem trivial. Let's make them significant. 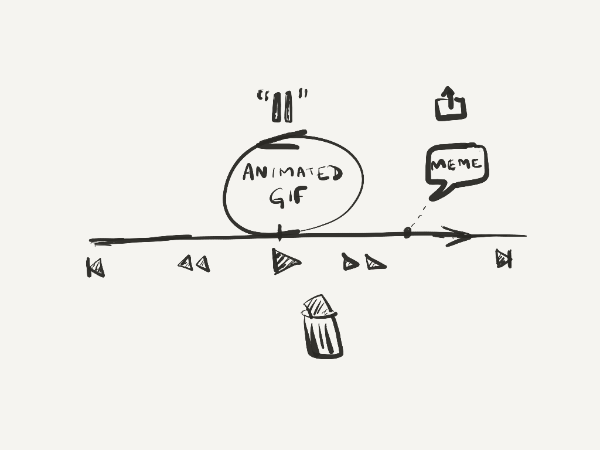 The power of animated gifs.

1/ When they first emerged, many decried video games as trivial, time-wasting inventions.

2/ Today, gaming is a huge industry, which employs tens of thousands and generates billions.

4/ Some ideas are born significant, like a breakthrough in cancer treatment. Others acquire significance as they mature.

5/ Take for example, the phenomenon of the animated gifs, which have exploded in the last couple of years.

6/ On the face of it, these are trivial, time-wasting social objects. But try imagining the possibility that they are NOT.

7/ Videos are hard to consume, respond to, discuss and comment on. Animated gifs change all that.

8/ One way to understand them is as refactored pause buttons. A pause button is a degenerate, 1-frame animated gif.

9/ Animated gifs allow us to excerpt bits of videos to pay special attention to, an ability as essential to visual media as quotes to text.

11/ A popular use of animated gifs is to express emotions for which we have neither words nor emoji, by using skilled actors.

12/ Seen from the perspective of possibilities: animated gifs represent the first step in interactive, social video.

13/ Animated gifs (and image memes) together break video out of the tyranny of linear, steady-rate time.

14/ One can imagine a future video player that eliminates the stop button (it has no meaning now) and expands the pause button.

13/ If a bold technologist decides to explore their potential fully, the informal subculture of animated gifs could give birth to an industry.

15/ The right tools would democratize access the tools of sequencing and time control of video that only editors enjoy today.

16/ Neal Stephenson imagined some aspects of this kind of future with his notion of a "ractive" in Diamond Age.

17/ Dozens of important technologies grew out of precisely such "trivial" seeds in which imaginative people saw possibilities.

18/ So don't waste your time arguing "importance" vs. "trivial" in futile, zero-sum ways. Ask: how can you manufacture importance?

19/ Maybe animated gifs won't grow into something as big and important as some of us hope and anticipate, but many other things will.

20/ If you only pay attention to obvious "save the world" problems, you're ignoring the vast majority of innovation potential around you.

21/ But if you pay attention to the seemingly trivial, and train yourself to see possibilities, one day you might find something YOU can make significant.

22/ You already have this ability: it is just the ability to be playful as you were when you were a child. Play is significance alchemy.

Thanks to those who participated in a twitter thread on this topic a few weeks ago. And happy new year!