Duke University researchers recently conducted a study that demonstrated that when we don't like a proposed solution, we have a tendency to deny the existence of the problem. This is called solution aversion, and is one of my favorite new ideas. While more work is obviously needed (isolated, irreproducible results have been a problem in psychology lately),  this one matches my anecdotal experience. I believe it is a widespread problem. What can we do about it? 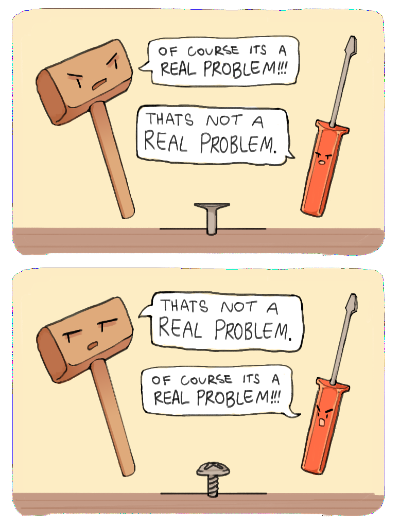 1/ Duke University researchers found that people believed or disbelieved a claim about climate change depending on proposed solution mechanism.

2/ Republicans were more likely to believe the claim if the proposed solution was based on free-market mechanisms rather than regulation.

3/ In this case, Democrats showed no effect. But in another, a looser gun control proposal made Democrats downplay violent crime problems.

5/ I think solution aversion exists because our preferred problem solving approaches are at the very heart of our identities.

6/ We ARE how we solve problems. Often navigating the threat to identity is 10x harder than merely learning the new skill.

7/ "When you have a hammer in your hand, everything looks like a nail." Corollary: "If I take away your hammer, I blind you."

8/ Worse, I make you feel unworthy and helpless relative to your arch-rival, Person With Screwdriver Who Thinks Everything is a Screw.

9/ You also see corporations resisting change because the Evil Screwdriver Faction would gain power at the expense of the Noble Hammer Faction.

10/ I've found personally that the most effective way to deprogram myself is to separate the mechanism from its champion.

12/ Taking people out of the equation, you are left with question of necessary/sufficient conditions under which a mechanism works.

14/ Solution aversion is chjaracteristic of formulaic "doerism". We use uncritically held values to fill gaps in understanding, instead of thinking.

15/ A core idea in the breaking smart philosophy (see Tinkering over Goals) is that the Internet has elevated new problem-solving mechanisms.

16/ In every breaking smart workshop, I've noticed a tendency to trivialize problems solved by bits that were taken seriously when they were solved by atoms.

18/ This is funny. A problem doesn't change in importance simply because we solve it with Twitter instead of Serious Committee of Elders.

20/ So the next time you encounter solution aversion, set aside identity issues and ask: when does this mechanism actually apply?