The Anatomy of the FutureFly

Remember that awesome 1986 movie, The Fly? Jeff Goldblum played the career-defining role of anti-superhero scientist Seth Grundle, who thinks he has invented a teleportation machine, but it accidentally functions as a gene-splicing machine. A fly gets trapped in the "from" teleport pod in his first attempt to teleport himself. Initially it looks like the teleport worked, and Grundle even feels much better. He rationalizes this as the "cleansing" effect of the teleport, but once he realizes he's been gene-spliced with a fly, things get weird. Briefly, he gains some super-strength and other benefits, and calls himself GrundleFly, but this is no Spider-Man tale. He becomes more and more fly-like, until he's reduced to a strange pathos-inducing monster whom the other monsters kill, a la Frankenstein's monster.  The Fly defined the sci-fi mood of the 80s for me much more than movies like Blade Runner or Terminator. It is not a simplistic update to the Frankenstein tale: it is a clever rethinking of the basic parable of technology adoption. One that's particularly apt for the "deployment wave" of the Internet revolution. 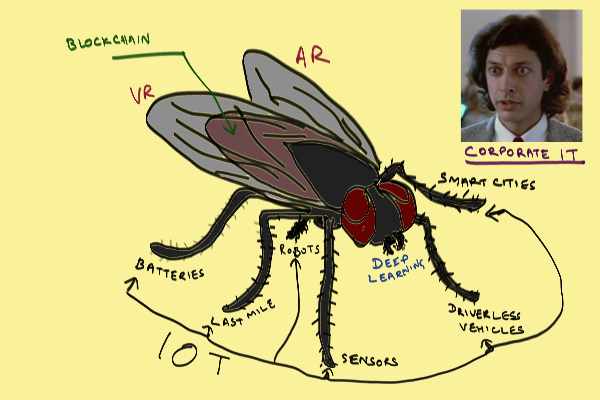 Current stage of deployment-wave IT transformation

1/ In the parable of technology that is The Fly, there are two sides to the technology: controlled teleportation and uncontrolled gene-splicing.

2/ In the beginning, the technology's designed purpose as a teleportation machine is front-and-center, 99% of what the characters are thinking/talking about.

3/ We see the fly entering the machine, unnoticed, with Grundle. It is an ominous foreshadowing of the unintended function: as a gene-splicer.

4/ By the middle, of course, teleportation is entirely forgotten, it is the gene-splicing function that dominates the plot. How do we apply this parable to IT?

5/ By the Carlotta Perez model, we are just at the end of the installation wave of IT transformation. That certainly didn't go as planned.

6/ Traditional IT professionals, schooled in the IBM way and mainframes thought they'd remain in charge, overseeing measured "adoption" of technologies.

7/ What actually happened was that vast public cloud infrastructure, SaaSy reinvention of every IT function, and consumerization of IT reshaped entire sectors.

8/ In the process, corporate IT saw its role shrink drastically, with power shifting to "digital native" disruptor companies, vendors, the CMO office, and other loci.

10/ Though the infrastructure has changed dramatically, traditional functions like marketing, sales, HR, IT and engineering are still visible in the new topology.

11/ The tech landscape right now is like Seth Grundle at the end of the first act. Still mainly thinking in "teleportation" terms, just getting a clue about the gene-splicing.

12/ We are on the cusp of the deployment wave of technology, where the vast potentialities of the infrastructure laid down in the installation wave are being unleashed.

13/ This is the part of the movie where the "gene splicing" effects start to dominate the "teleportation" effects. Where Seth Grundle's rationalizations start to fail.

14/ Like Grundle, we're clueless. All we know is: powerful institutions have a certain vision of the future, and there's a fly in the machine they think will get them there.

15/ A typical "vision of the future" is like Grundle's teleportation dreams. The key adjective seems to be "smart." Smart cities, smart grids, smart fridges.

16/ Listening to the chatter in the IT commentariat class, you get this sense that a lot of tech watchers are simply projecting what they want to happen onto technology.

17/ The technology set is widely recognized. The Big 4 are machine learning (deep learning in particular), blockchain, VR/AR and IoT (Internet of Things).

18/ But recognition and labels are not the same thing as understanding and control. Just because Grundle named the thing a teleportation machine didn't mean squat.

19/ Most commentators haven't actually looked into the DNA of the Big 4. They just use words with no interest in what they signify. They haven't noticed the fly.

20/ They simply imagine the future they want, and throw on a couple of phoned-in elements based on a superficial gloss of the Big 4 technologies.

21/ They think the Big 4 constitute a teleportation machine that will simply transport them to the specific utopia they want, with the nature of the tech being irrelevant.

23/ The pessimists are equally bad. To labor pessimists and political reactionaries, the Big 4 are the four horsemen of the neoliberal apocalypse.

24/ For pessimistic cryptoanarchists, an ominous cyber-crypto surveillance state is trying to kill the future, and they'd rather burn it all down than let "The Man" have it.

25/ What they all share is disinterest, bordering on indifference, on the alien nature of the new technology, and a lack of curiosity about what it's actually doing.

26/ The "true nature" of the Big 4 includes a "fly" aspect in the deployment wave transformation "machine" that almost nobody is paying attention to.

27/ In the logic of the "smart city" narrative, the blockchain, for example, is just a word to throw into glossy brochures. It doesn't have to make any sense.

29/ In the examples above it is fairly obvious why each of the specific ideas is problematic (the last one is a joke). If you can't see why, you haven't thought hard enough.

31/ The point is the Big 4 aren't some sort of passive buffet of individual IT toys you can pick and choose and compose into your chosen utopia.

32/ No, they constitute the DNA of an entire wave of technology, with much of the logic of what they will do being a function of unknown/unpredictable interactions.

33/ Fred Pohl: "A good science fiction story should be able to predict not the automobile but the traffic jam." It's a line I've quoted before in these newsletters.

34/ The Fly is a perfect example of a complex "traffic jam", which is why it is a good sci-fi story. Much better than a lot of the more stylish and famous 80s movies.

35/ The "traffic jam" was the gene-splicing aspect of the tech running into the teleport aspect. The result was an unrecognizable new kind of entity.

36/ What happens when "blockchain" runs into IoT (driverless cars being a piece of IoT)? The incoherence of "drivers licenses on the blockchain" is just the beginning.

37/ This is one reason I don't play the prediction game with technology, though I do track it and keep up fairly closely. By the time prediction is useful, it is too late.

38/ So what can you do instead? The trick, I believe, is to scan and collect "traffic jams" that might be important from each new glimpse of the future.

39/ Take the Pokemon Go experience. A "traffic jam" I noted was its interaction with self-segregated topographies of urban environments.

42/ My nephew visited me in Seattle for the first time last year. As far as I am concerned, he barely saw Seattle. He did collect a lot of rare Pokemon though.

43/ The point of this is, you may not be able to predict the future, but you can file away one potential "traffic jam" to validate in the future: "AR causes geo-cultural mixing/churn conflicts"

44/ Another thing to look for is what I like to call "found design fiction" (by analogy to found art), where you notice little combinations and patterns of deployment.

45/ Design fiction is an imagined piece of the future, like say a bicycle in 2075 that tries to embody ideas about the future implicitly rather than explicitly.

46/ For example, if you think 2075 will be a post-climate-change hellscape, your design fiction bicycle might be a 4-wheel climate controlled vehicle.

47/ If you think 2075 will be a post-scarcity utopia where material possessions are obsolete, your 2075 bicycle might be an unsecured/unlocked piece of public property.

48/ What I call "found design fiction" is stuff already lying around ("the future is already here, it is just unevenly distributed" ==> some future stuff is lying around).

49/ An example is cryptocurrency. It is fashionable among tech watchers to signal their sophistication by saying they are more into "blockchain" than cryptocurrencies.

50/ It may well be the case that blockchains, conceptualized as distributed general ledgers for all sorts of contracts and weird things, are bigger than just "currencies."

51/ Yet, the fact that the possibilities of distributed computing, cryptography and proof-of-work first came together to form a "currency" is not insignificant.

52/ So one found-design-fiction hypothesis might be: "every innovation in cryptographic distributed computing will first be used to develop a currency-like instrument."

53/ This sort of thing is always the case. For example, it is widely recognized that one of the first uses of any technology is usually pornography.

54/ Narrative "traffic jam" and "collision" fragments and found design fiction form a fragmentary base layer that should underlie your thinking about the future.

56/ Good futurists and artists tend to switch back and forth between the big scenario narratives and the base layer of little collision fragments and "found design fictions.

57/ Going back to The Fly as parable, all technological change is always gene-splicing. It is never a simple "teleportation" to your utopia.

58/ Gene-splicing is a great metaphor because it underlines the fact that technology change is a chicken-egg loop between micro and macro. Scenarios and fragments.

59/ (Aside: iirc, "narrative fragment" is a term of art in Dave Snowden's Cynefin model, which is one of the better frameworks for thinking about the future)

60/ What good trend and context navigation mental models, such as Cynefin, Wardley Maps, and "superforecasting" do, is really force you to think at both levels.

61/ In a way the specifics of the tools don't matter. Pick your favorite tools, make up your own, or mash some up. The key is to swing between fragments and wholes.

63/ The reason swinging back and forth from fragments to wholes is a good idea is that is the only way you can watch Gall's law's effects unfolding in real-time.

64/ The found design fiction and traffic jams are the "working simple systems". The "working complex system" is your iteratively refined description of the emerging future.

65/ That way, you won't be entirely future shocked by the FutureFly as it takes shape, and have a few things to bet on, even if you can't predict the shape of the whole.