The Art of Laser Focus

We use lasers as a metaphor for focus, but have you ever tried actually applying the operating principle of lasers to your life?

The key to lasers is that they recruit a lot more of the natural potential of the working material, in a cleverly harmonized way, to produce light. A 5 milliwatt laser beam can be projected much farther than the light from a 40w bulb. The cost though, is that the material will determine the wavelength. You can't generate a red laser beam from a material whose atomic transitions produce blue photons. The material fixes the resonance frequency.

So what can you do with that idea? Read on for some coherent illumination on the matter (heh).

ps. We've had a bunch of new subscribers. If you're new to this newsletter, scroll down to the bottom for an orientation sidebar. 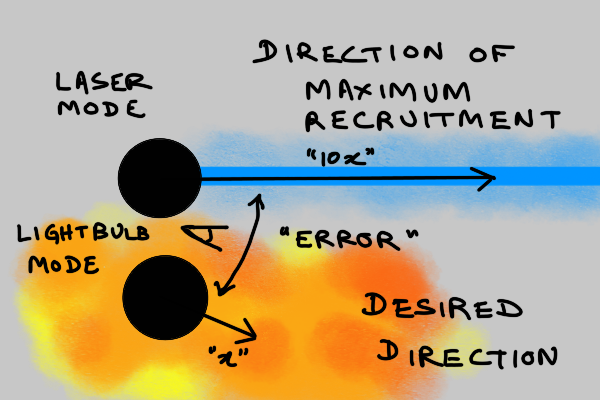 2/ If you want to maximally recruit the potential of the system you're working with, you may have to give up significant control over the orientation of the effort, analogous to a laser's wavelength and material composition.

3/ A silly but illustrative example: if you know how to read a language, a library of books in that language is an enormously powerful system. You can recruit all of its potential to grow your mind.

4/ If you don't, it's a warehouse of very expensive doorstops. You can recruit very little of its potential, and you're probably better of using a bunch of bricks.

5/ In other words, focus is a property of the system, not your intentions about how to use it. It's the medium-is-the-message idea in a different form.

6/ In the most extreme case, a system may be priceless around its natural orientation, completely useless in every other orientation, and incapable of any reorientation.

7/ So to get any value out of it at all, you are forced to use it in a fixed, but maximally-recruited potential mode (a useful, but terminally dumb system).

8/ The principle applies to many complex systems comprising large numbers of similar building blocks with some potential for natural alignment (not enforced synchronization).

9/ In the major weight-training lifts, you can maximally recruit the muscle fibers of almost all the major muscle groups of the body. In more functional everyday movements, you may only be able to recruit a tiny fraction of your muscle power.

10/ While formally meditating, you may be able to recruit vastly more of your awareness from all parts of your body (ie more of your neural system) than you can during some more functional task.

11/ As the leader of an organization, missions that fit the resonance profile of the employees can recruit vastly more of the potential for engaged work ("missionary" level engagement) than others.

12/ How do you get to laser state? You loosen control over direction, and "hunt" for the most resonant internal orientation rather than the one aligned with where you think you want to go.

13/ A case of “There go my people, I must find out where they are going so I can lead them.” (Alexandre Auguste Ledru-Rollin)

14/ Then you drop non-resonating elements, maybe add more suitable new material, reconfigure, and iterate. It's like agile pivoting, but directed inward rather than outward.

15/ Do it enough and you get a laser-like condition. Of course, the laser state may be useless to you, but it represents the most fully recruited potential of the system itself.

16/ The laser physics of human systems though, is subtle, and people frequently misunderstand it via some naive idea of "aligning values and goals" or similar high-minded BS.

17/ The laser potential of a system is not something you design or dictate. It is something you discover, a property of the working material at its most alive.

19/ In practice, this often leads to what Bruce Sterling labeled acting dead. A low-potential lifestyle designed around adopted beliefs rather than discovered resonances.

20/ People who misunderstand the principle at organizational levels assume that cultural or racial homogeneity leads to the most powerful output from human systems.

21/ In practice, that kind of homogeneity only produces fairly dumb human laser beams, capable only of such things as mob violence or chanting for a sports team.

23/ The most powerful ones exploit illegible resonances that are invisible to outsiders. If you're in the system, you feel the unnamed power, the elan vital, surging through you. I

24/ f you're outside, it looks like inscrutable magic. You cannot discern any obvious answer to the question, "what does this system want?" from its behavior. It's just highly alive.

25/ Discovering your laser potential may require you to drastically change your idea of what you're supposed to be doing. You adopt a mission, but you discover a calling.

26/ Of course, it's not entirely arbitrary. A company set up to make airplanes, with the corresponding kinds of thinking, capitalization, and hiring, is unlikely to discover that it really should be making cookies.

27/ But within broad limits, you have to be open to being surprised by the nature of your inner harmonies, at every level from individual to big organizations.

28/ In a way, this is like discovering an internal network effect in whatever you are doing. An exponential, runaway process of recruitment of untapped potential you may not even be aware the system possesses.

29/ It's like word-of-mouth spreading through a system, with already recruited parts getting their friends to join. Whether we're talking muscle fibers, neurons, or employees.

30/ It's a more transient version of finding "flow" in an activity. A sudden phase transition when things harmonize radically well and turn "on."

31/ The idea of product-market fit in startups is a special case. The general case is system-identity fit. A system discovering its own true nature and becoming self-aware in some sense.

32/ The result is a surge of amplified power flowing through a system. For example, once you find your form, you may be able to rapidly increase how much you can lift (before you inevitably hit your next plateau of course).

33/ Maintaining the laser state, once you recognize it, involves keeping the energy pumping properly, and avoiding dissonances that break the recruited "power network"

34/ The key is to mercilessly prune away things that inhibit the snowballing recruitment of system potential. Crud turns exponential processes into linear or sublinear ones.

35/ A single misplaced dissonance can dampen the whole show, but this is not fragility, since you can always identify, eliminate, and replace such false notes with relatively low effort.

36/ So to summarize, the art of laser focus is about discovering an inner network effect that unlocks the resonance power of a system to operate at its maximum potential.

37/ And the key to learning this art is being willing to make the recruitment-orientation tradeoff: tap more of a system's potential by letting go attachment to preconceived notions of what the system is for.

I think I'm overdue for one of my occasional re-introduce-myself sidebars for the benefit of new readers. Now is a good time, since we seem to have had one of our occasional mysterious sudden influxes of new subscribers. About 136 new readers added since last week, putting us over 5700 now. So those of you who decide to stick around... welcome aboard. Those of you who don't, I hereby break up with you first.

You can find the archives here, and the link is always at the bottom of every mailing. There have been over 90 issues so far, and I've forgotten what I wrote in half of them, so you may find I occasionally repeat or contradict myself.

As you may or may not know, this is a weekly newsletter associated with the Breaking Smart site, where I publish in-depth seasonal essay collections on technology and society. Season 1, published in 2015, was on software eating the world and is available in English, French, and German. Season 2 will hopefully be out this year.

This weekly newsletter features more off-the-cuff thoughts in tweetstorm, short essay, or notebook entry form. But it's primarily an excuse for me to practice my iPad+Pencil drawing skills, so make sure you set your email to 'display images'.

You can also find my writings on other topics (and lots of other writers) on the blog I founded and edit, ribbonfarm, and my shitposting on twitter at @vgr. Stalkery types can find out more about my shady past on my main biography site, venkateshrao.com.