The Birth of Magic

What happens after the End of History? The answer, I argue, is the Birth of Magic. We are entering a post-historical era where things continue to happen, surprises continue to come at us, and change continues relentlessly, but our individual and collective response to the continuation of time, raw events, and surprises, cannot be meaningfully clubbed together with the activity formerly known as making "history". It is a new kind of collective posthistorical human experience of kairos, or event time. We've passed through a narrative speed-of-sound barrier (oral history cannot keep up, hehe!). In this supersonic regime, far from history ending in the sense of no more surprises, there are now so many surprises, coming at us so thick and fast, that we are being forced to invent something like a supersonic narrative technology, where mere "history" is a kind of subsonic narrative technology. The events of 2016 were, in a sense, the sonic boom marking the end of history and the birth of what is beginning to replace it: the creation and consumption of magic. 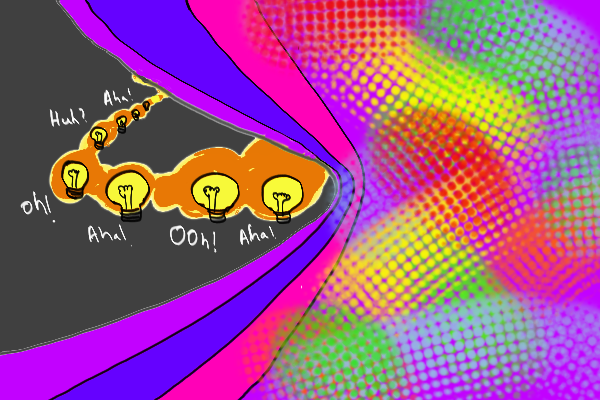 A supersonic narrative metaphor for the end of history and the birth of magic.

1/ Kurt Vonnegut said, “History is merely a list of surprises, It can only prepare us to be surprised yet again” So what happens to the list when history ends?

3/ Francis Fukuyama’s “End of History” thesis is not an argument that the list of surprises stops growing. It’s an argument about how we process surprises individually and collectively.

4/ The “end state” of the world at the end of history is when liberal democracy becomes the basic operating system of governance everywhere, like DNA becoming the basis of life.

5/ This does not mean evolution ends. It means further evolution happens within the structural language of liberal democratic forms. We are just at the beginning of that path.

6/ As Fukuyama has noted in his later writings, challenges to democracy, such as neopatrimonialism, still retain the forms of democracy. This means how we process surprises has certain continuities.

7/ The full title of Fukuyama's classic was The End of History and the Last Man. We talk too little about the Last (Transhu)Man part, whose defining psychological trait is his relationship to surprise.

9/ Universal democracy institutionalizes a divide between people who are “educated” in the “prepared for surprises” sense, and the "trained", who are merely "prepared against surprises."

10/ The essence of liberal education, whether you get it at school, at a startup, or as a blue-collar philosopher gaining enlightenment fixing motorcycles, is this state of preparedness for surprise.

11/ The essence of vocationalism, whether you attained that mindset in a PhD program, a finishing school for elites, a meditation retreat, or a welding course, is preparedness against surprise.

12/ When you are prepared against surprise, your defenses include walls, “training” to police others on norms, training to spot “fake news,” spot “biases,” recenter in "serenity," and other cognitive habits.

13/ When you are prepared for surprise, you are defined by a cultivation of behaviors of exploration and play, a capacity to stop and do a double take and recognize true weirdness when you see it.

14/ Another Carse quote helps distinguish educated versus trained senses of history: “if we cannot tell a story about what happened to us, nothing has happened to us.”

15/ In historical times — pre-1991 — we responded to the surprises that make up history by telling stories about it that we thought constituted “reality” in some sense.

16/ To be educated is to develop a deep awareness of history as merely a list of surprises, rather than as a specific "true" story or account of those surprises.

17/ You learn to see, for instance, that the history of the world can be told in whiggish, reactionary, progressive, and postmodern ways. Each reflects a pattern of caring rather than “truth.”

19/ Training in history prepares you against surprise by turning each emotional texture of caring into a predictable response. This is the essence of derping: reiterating your priors in the face of novelty.

20/ No matter what happens, the whig will respond with optimism, the reactionary with anger or sadness, the progressive with outrage or compassion, the postmodernist with apathy or amusement.

22/ This predictability is possible because to be prepared against surprise is to take your cues on how to respond from friends who think like you rather than the event itself. Imitation outruns attention.

23/ No matter what the surprise is, the ideologue will attempt to use the collective emotional response to a surprise towards the same agenda. Thanks to predictability of the responses, this is possible.

24/ No matter what the surprise, the whig will always push for more open markets, the reactionary for more closed borders, the progressive for more welfare, the postmodernist for more stimulating art.

25/ But there is a way to return cognitive vigor and interest in your sense of history. Which is to care about history with a very special pre-emotion that cannot be produced through imitation: curiosity.

26/ Curiosity, unlike stimulation-seeking, does not operate by the immediate calculus of pleasure and pain but by the anticipation of growth, and openness to the unpredictable emotions that accompany its pursuit.

27/ The behaviors it produces are not shaped by watching others, but by attention directed at the surprising event itself. Curiosity is more likely to create behavioral divergence than convergence.

28/ To be curious is to cultivate a sense of history that allows you to get better at spotting the most surprising things, the things that make the future maximally interesting.

29/ Curiosity is destabilizing. Where other attitudes of caring about history try to preserve its narrative coherence and continuity, curiosity is happy to boldly venture into non-backward-compatible plotlines, retconning the past into nonsense.

30/ By the logic of the second Carse quote (/14) nothing happens to the incurious, because nothing changes their story, ways of caring about the world, or in a self-fulfilling-prophecy way, their fates.

31/ The incurious merely retell old stories with cosmetic changes that don't actually accommodate the surprising, setting in motion the self-fulfilling prophecies of their own decline.

32/ To be prepared against surprise is to be prepared to preserve your narrative of history against the disruptive potential of surprises. To block the generativity they represent. To begin to die.

33/ Or to put it risk-management terms, to be prepared against surprise is to be prepared to contain the downside, by preferentially seeing everything new as an existential threat.

34/ To be prepared for surprise is to be prepared to ignore sunk costs of past growth, and begin growing again in a newer way. This means being open to the upside of the surprising.

35/ This is what fuels technological change and creates the future. Those who are prepared for surprise find unexpected new agency by co-evolving with its unfolding impact: sex with the future, so to speak.

36/ If everything is fake news, all modes of caring equal (and equally ideologically subverted), and no surprise possible, then you cannot tell a story, and nothing is happening to you. The future is passing you by.

37/ This is the end-of-history state of the trained but not educated: they lose the ability to tell stories, or notice things that could be happening to them. It’s all fodder for apophenia and conspiracy theories.

38/ They experience life through the narrative idioms of a particular ideology rather than directly, as a growing list of prepared-for-surprise responses: growth.

39/ It is tempting to jump to the conclusion that we are in a state where the educated will rule the merely trained, where the curious will form a curiositycracy within democracy. This is false.

40/ The reward of Carsean education is extra agency, but it is not necessarily direct. If you co-evolve with the list of surprises you gain medium-is-the-message agency, such as Mark Zuckerberg enjoys as CEO of Facebook.

41/ One way to understand the End of History is as the installation of the democratic franchise -- the vote -- as a sort of UBI of political agency. A Universal Basic Political Agency, UBPA.

42/ That's a minimum on the political agency you enjoy after the end of history. But the maximum is not where you might think: Trump as POTUS has been even more whiny and angry at the limits to his power.

43/ Political agency beyond the UBPA actually accrues to the educated-in-Carse-sense Last Man: somebody prepared for surprise rather than against it. This is the agency in political "alpha" (by analogy to markets)

44/ This takes the form of fait accompli command over the political agency inherent in new technologies, the main source of real surprises today. Promethean political power, not pastoral.

45/ It's a truism that all technology is political. It is the curious who own the transient surplus political agency embodied by technology between the surprise of invention and end-state of commoditization.

46/ The commoditization of a technology is its democratization. It means any residual political agency is distributed as UBPA, and its exercise mediated by the merely trained, through democratic forms, in predictable-by-ideology finite-game ways.

47/ There is some correlation between liberal education in the institutional sense, and education in the sense of Carse's "prepared for surprise" state, but it easy to both overstate and understate it.

48/ To overstate it is to naively assume that a liberal arts degree makes you "educated" and prepared for curiosity while a vocational diploma in welding can only "train" and prepared against surprise.

49/ To understate it is to do what Trump supporters are doing now: confusedly conflating education, expertise and elitism in a rage-targeting construct that is blind to how posthistory actually works, while hate-reading fake histories.

50/ To actually educate yourself, do the things that are advertised as being educational. There is truth to the claims. But let the test of your education be your preparedness for curiosity, not your grades or credentials.

53/ In an atemporal post-historical state, the future is not just "already here, just unevenly distributed." Enough of it is here in a "sufficiently advanced" state that seems like magic to most.

54/ To be educated, to be prepared for surprise, is to potentially become one of those magicians. Resisting magical befuddlement and being alive to the actually surprising and its potential.

55/ One day, some surprise -- your surprise -- will lead you down a path of mastery of a generative future; a path that others fearfully shy away from. On that day, you will be born as a magician.

56/ To those merely prepared against surprise, your political agency will seem magical, and far beyond their democratic end-of-history minimum.

57/ You may be hated for it, loved for it, oppressed for it, or rewarded for it. Don't expect to cash out with your magical powers in obvious ways, through obvious forms of political power like being President.

58/ But so long as you find a way to continue the game, rather than sucked into finite games of winning and losing, marked by deadness to surprise, you'll be on the right side of history.

59/ You'll be among the educated, feeding and growing on surprise, one of the magicians. The merely trained will do whatever their magical befuddlement predicts they will do.

60/ History has ended. Magic has been born. You can either choose to be among the magicians, or among the muggles. Choose wisely.