The Cognitive Science of You

Breaking Smart is about aspiring to be part of the vanguard of technological change. Harboring this aspiration alone marks you as elitist in an era marked by enormous popular resentment against elitism. Fortunately for you, it is easy to separate yourself from the sorts of elites who are the focus of much of the anger. Unfortunately for you, it also commits to you to what might seem like a worse fate than being killed by a mob armed with pitchforks: the difficult path of an experimental life. 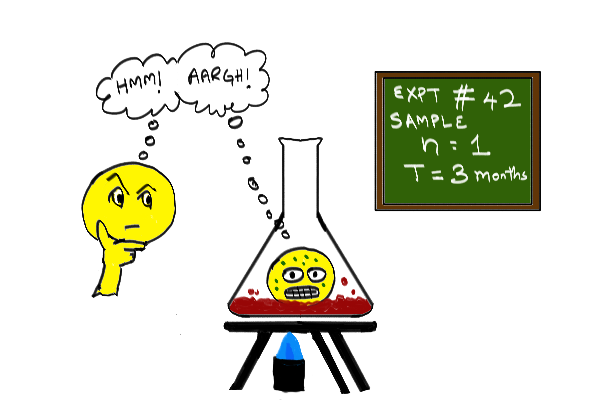 Living experimentally by being your own guinea pig.

1/ "Men, it has been well said, think in herds ... they go mad in herds, while they only recover their senses slowly, and one by one." -- Charles McKay

2/ We are in the midst of an enormous surge of populism and resentment against elites. Unlike populism in the 19th century, which revolved around the peasantry and a true working class, today's populism revolves around industrialized middle classes.

3/ For once, those of us trying to make a life and a living at the technological frontier are largely spectators of the anger rather than the targets of it.

4/ It's a refreshing change. Neither pro-Trump political outsiders, nor anti-Trump establishment types, are blaming software, robots, or technologists. They are blaming each other in a zero-sum status contest. To a lesser extent, this is also true of pro/anti Bernie Sanders forces.

5/ The rise of populist figures like Donald Trump and Bernie Sanders worldwide is the mark of a conflict between a certain subset of the elites and the declining industrial middle class.

6/ The bad news: even if you are dirt poor and struggling, the fact that you're reading this makes you a member of the elite. Merely aspiring to change your condition in non-zero-sum ways through technological leverage is a betrayal of industrial middle-class values.

7/ There are 3 overlapping categories of elites today: socioeconomic, cultural and cognitive. Reading this newsletter makes you part of at least the third category. You may also be part of the first two.

8/ Socioeconomic elitism is based on wealth, either inherited or earned. It is not money by itself, but having an identity based on your net worth that makes you part of this sort of elite. The elitism of New York, Washington DC, or Davos, is of this sort.

9/ Cultural elitism -- think sports or movie stardom, academic renown or literary acclaim -- is based on demonstrating prowess at some skilled activity to some community of taste. The elitism of the Oscars, or NY Times editorials and book reviews, is of this sort.

10/ Cognitive elitism though, is about choosing to operate by a certain non-zero-sum mindset. What Carol Dweck  calls a growth mindset (as opposed to a fixed mindset). Intelligence, surprisingly, is not a necessary feature.

11/ All sorts of elitism are marked by a sense of being different and better than "the masses." The vector of distinction depends on the flavor of elitism.

12/ Socioeconomic elites in the worst case think they're intrinsically better simply because they are richer, regardless of whether they inherited their wealth, acquired it through corrupt dealings, or through innovative production. Wealth for them serves as a sort of mark of divine favor.

13/ Cultural elites think they're better because they exhibit more prowess at some finite game-like activity with defined rules, be it tennis, acting or composing political essays in Marxist-liberal academic postmodernese.

14/ A lot of populist anger is actually driven by a variety of cultural elitism that has been systematically undermined in the last 30 years by globalization, neoliberalism and technology.

15/ Industrial blue collar workers used to derive their sense of identity and status from being better at (for example) operating machinery and feeling valued and needed in that role.

16/ As many historians have noted, one reason socialism declined in West is that the "working class" became the middle class and built a cultural-elitist sense of identity for itself based on prowess at skilled, but fixed, types of industrialized work.

17/ While this may seem more "real" than claiming superiority because you're better at playing the guitar or speaking French postmodernese, it's ultimately the same psyche. Prowess-based cultural elitism.

18/ If the famous story of John Henry were written today, Henry would be a skilled electric drill operator trying to prove he was better than a robotic autonomous drill, and deserving of more prestige than unskilled fast-food workers.

19/ The continued American political obsession with manufacturing is about feeding a sense of cultural elitism based on attachment to learned and treasured games of prowess, not on economic logic.

20/ The American political war of 2016 is really one between a collapsed, formerly elite class, and one that has avoided collapse, either through resources or the luck of having skills that happen to have become more valuable instead of less. It's a zero-sum status conflict.

21/ What both sides share with each other, but not with cognitive elites, is a fixed mindset. This means your reprieve is temporary. Once the political turmoil sorts itself out, attention will return to technological disruption and those driving it.

22/ A fixed mindset is about having a sense of dignity based on a fixed sense of who you are, whether based on wealth, or prowess at a type of work presumed to be of eternal significance.

23/ A growth mindset, on the other hand, is about having a malleable, adaptive sense of identity that is subject to constant renegotiation with the universe. To some extent, this is an unearned privilege, but one perhaps more democratically distributed than other sorts of privilege.

24/ This constant renegotiation is achieved through steady experimentation with your own life. This means skills never harden into ossified habits, or turn into hardened identities, or into anchors for patterns of social affiliation.

25/ This also means wealth, or any other form of accumulated gains, cannot become a source of hardened identity or social affiliation.

26/ Real experiments can surprise you with their outcomes. To experiment on yourself is to be open to changing yourself in unscripted ways. This inevitably means your social milieu is also subject to change. You may come to despise old friends, and learn to admire those you formerly despised.

27/ This also means things you may have accumulated, be it wealth, degrees, or awards, may suddenly seem worthless to you, while things you ignored as worthless and not worth accumulating may suddenly become priceless and leave you feeling impoverished.

28/ Fixed mindset people also have a fixed sense of their place in the society. The only sort of social mobility considered acceptable is scripted mobility that does not betray the values of "where you came from."

30/ Industrial age psychology reflects these norms. As William Whyte noted in The Organization Man, psychology in the industrial age was about producing "well adjusted" individuals, not mentally healthy ones.

31/ Being "well-adjusted" with respect to a disappearing class is a sort of insanity. At the same time, "betraying" obsolete class loyalties to adapt to new realities is sanity that makes you externally maladjusted.

32/ One consequence of this well-adjustedness bias in industrial psychology is that you're mostly on your own if you choose to adopt a growth mindset. Society is by definition not designed to provide support to transgressors of its own, class-segmented norms.

33/ If you are living in an experimental way -- self-learning skills for which there are no schools, making the "wrong" sorts of friends, living in the "wrong" places, and cultivating the "wrong" tastes -- you are part of the cognitive elite.

34/ There are no core textbooks, maps, or scripts for this path. You are a lifelong ongoing experiment. You may sometimes find co-conspirators for some experiments, but your default sample size is n=1. The only expert authority you can appeal to is you.

35/ You may spend a few years in one community, move on to another, or spend some years pursuing solitary personal challenges. Experimental living can take many forms.

36/ You may be attracted to experimental (and experiential) living communities devoted to particular kinds of exploration, but your primary loyalty will be to the deepest truths about yourself.

37/ Quantified Self, the rationality community, hipsterdom, lifestyle design in Bali: ultimately, these are just chapter headings. Not the text, let alone the whole novel.

38/ Some friendships may endure for a lifetime. Others may be restricted to one or the other chapter of your life. Still others may turn into enmity despite your best efforts.

39/ Experimental living isn't about living in San Francisco and going to Burning Man every year. Many "burners" are very colorful people but creatures of habit living highly non-experimental lives.

40/ It isn't even about that well-studied psychological trait (part of the Big 5) called "openness to experience" because you can be safely "open" in very risk-limited ways.

41/ Experimental living is about being willing to pay the emotional and social costs of truly experimenting on yourself, with your entire self being open to radical reconstruction. For the rest of your life.

42/ As the opening McKay quote suggests, crowds are good for going insane with, but regaining and maintaining your sanity is by default a solitary, lifelong struggle.

43/ You are a being at the intersection of two worlds: one is the shared external world. The other is your private internal world, which ultimately only you can truly access.

44/ The cognitive science of you, like any other science, is a path of accepting pain in order to discover novel truths about yourself. And like it or not, on some parts of this path you will be alone.

46/ If you rise to all those challenges, congrats, you will be part of the cognitive elite, and live a life under constant, unpleasant siege by the fixed-mindset world.

47/ But I'll guarantee you this: whatever the outcomes of your experiments, you will never regret choosing growth and change over the comforting stasis of a fixed identity.