The Fortune at the Edge of the Network

In this newsletter, I want to focus on an under-appreciated mental model: the idea of the "last mile" and the massive wealth it contains. 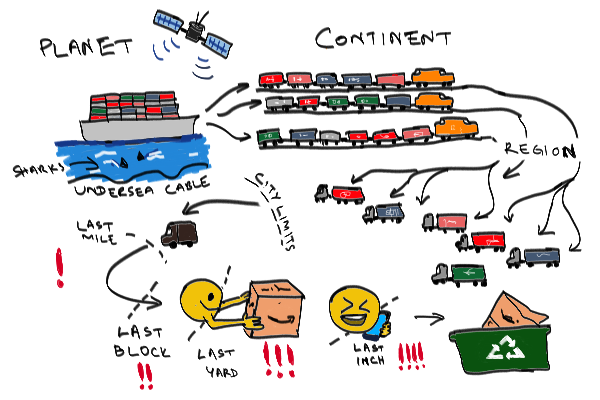 From Last Mile to Last Inch

1/ “The last mile” is a phrase used by engineers to talk about the last (“leaf”) like segments of large networks with approximate center-to-edge topologies.

2/ In all sorts of network logistics (transport, telegraph, telephone etc), historically the "last mile" has been the bane of infrastructure. It’s where the messiest practical issues live.

8/ In raw flow volume terms, the last mile probably accounts for the bulk of actual miles traveled by anything on a network due to sheer number of endpoints.

9/ The last mile is the typically the last to go hi-tech. Containerization still stops and turns into break-bulk at city limits. Fiber optics still turns into local-loop copper (DSL) in many places.

10/ As the red !!! show in the cartoon, issues get more tricky in last-block to last-inch land. It's still physically and legally complex, but that isn't the hardest part anymore.

12/ Increased demand is obvious: postal systems/FedEx etc weren't built with this much small-package flow in mind. Neither were front porches or mailboxes.

13/ Inequality is less obvious: in an unequal society there is more incentive for low-level theft and pilfering, easiest at the last block.

14/ Anecdotally, theft from porches etc. has risen: more temptation, more people in an economic condition where they can be tempted. But careful how you interpret this.

15/ As Anatole France sardonically observed, “The law, in its majestic equality, forbids the rich as well as the poor to sleep under bridges, to beg in the streets, and to steal bread.”

17/ You also increasingly have both large, low-value packages (e.g. cat litter) that are awkward for small locker-based systems or stairwells, and small jewelry-level value packages (iPhones)

18/ Buildings change slowly, especially in old cities with civic gridlock. It will take a decades for new buildings to reflect last-block needs. Follow the writing of Kim-Mai Cutler for this action in San Francisco.

20/ There are now fights over charging in charging stations, homeowners are setting up informal charging services on lawns. Blue Apron customers pile up ice packs.

22/ And as more and more value in flow (VIF) is in the last block at any given time, incentives for conflict and crime increase.

23/ "Stealing" cable or electricity required some sophistication, "stealing" wifi was much easier…for a while. The opportunity space will increase at all levels of difficulty.

26/ The last block/inch is also has a non-criminal economy developing: from unlocking smart-contract rental cars to power outlets in cafes that charge for a charge.

27/ A lot is low-value/high volume so online micropayments arguments ("just make it free"/"not worth financializing") apply. But not all.

28/ Frederik Pohl once said “the job of the sci-fi writer is to predict not the automobile but the traffic jam." Traffic jams are usually at the leaves of infrastructure trees.

30/ I like the holographic principle as a metaphor for for thinking about the effects of s/w-eats-a-network: more of the valuable information within a  volume of space can live on its surface.

31/ For a network, the “volume” is the part behind the endpoints, which usually converges on one or more back-end centers. The “surface” is the set of all endpoints.

32/ As a result, there is a LOT of economic value in the last block to last inch zone. C. K. Prahlad’s famous fortune at the bottom of the pyramid idea generalizes to “edge of any network.”

33/ In future, if current progress in brain implants continues, there may be an even bigger fortune in the “negative 1 inch” that goes into your head (disclosure: company mentioned in that article, Kernel, is a client).

34/ A general topological theory why this happens is that a more informationally powerful technology induces a higher-resolution network structure.

36/ A network core can be defined as the low-resolution backbone where economics allows aggregation leverage, and low transaction costs for huge financial flows.

37/ This is anything you can call a “cloud” in some sense: a datacenter, a large dam, a power plant, a major interstate highway, a rail depot. I wrote about this idea in my Aeon essay American Cloud.

39/ So sociologically, the last mile/block/inch is where the market stops and what I call an economics of pricelessness, based on values and norms, starts to kick in.

40/ When large-scale disruption happens due to a major technology like s/w, social-norms space gets systematically pushed back by market space.

41/ The ultimate reason is physics: this is tendency towards "plenty of room at the bottom" (Feynman). As the market occupies that room, sociology (and in the future, psychology) yields to economics

43/ The urban manifestation of these dynamics is gentrification: technology extending the power of markets into our community lives at increasing resolution.

44/ But if you think this process is almost over, think again. It's just beginning. You could say iOS and Android represent gentrified and slum-like digital neighborhoods in the last inch.

45/ You know the old saying, "your freedom of action ends where my nose begins”? This is about to get pretty literal. There is a power struggle right by your nose/ear.

46/ But it isn’t between free individuals and an enslaving techno-capitalist cloud. You never were that free an inch from your face. You were merely the captive of non-economic forces.

48/ At best though, what we have here is technology liberating you from the tyranny of neighbors. And which view is true for you is more within your control than you think.

49/ If you see technology as potential for increased agency, you can learn to rule the last mile like a gritty cyberpunk novel protagonist, even if you don’t own a billionaire platform.

50/ If you see technology as increasing agency only for privileged others, it will become a self-fulfilling prophecy and you will end up on the losing side of this process.

51/ You will also be on the losing side if you don’t recognize that tyranny of neighbors (“hell is other people”) is a factor, a dynamic the dystopian show Black Mirror explores well.

52/ In the Black Mirror future, technology does not contend with the power of communities. It becomes allied with it to suppress individual freedom even more.

53/ If you think this is unlikely in the real world, think again, entire countries like France seem to be exploring that direction of evolution.

54/ This is not to absolve infrastructure titans and CEOs of big platform companies from all responsibility, or to abandon everybody to their own devices (heh!)

55/ My buddy Tristan Harris has good thoughts on ethics in design for technology builders. I don’t always agree with the details of his thinking, but he’s right that with last-inch power comes great responsibility.

56/ If you’ve already decided “infrastructure creep” is bad, you’ll use dystopian metaphors like “tentacles of capitalism” or “eye of Sauron” or “the participatory panopticon” (for Black Mirror version).

57/ I personally tend to think of technology as ideology agnostic: this would happen even if we had a different ideology than neoliberal clickbaitism driving it.

58/ My preferred metaphor is the fingers/eyes of technology itself, considered as a whole (what Kevin Kelly calls the ‘technium’).

59/ The “eyes” (or senses more generally) are getting incredibly precision in what they can see. I think of last-inch/click-tracking level “seeing” as “retina logistics” by analogy with Mac displays.

60/ The “fingers” of technology are getting increasingly delicate and precise as well. If the last-mile actuation capacity of the cloud was a sledgehammer, we’re at needlepoint now. Did your phone ding when this email arrived?

61/ This is scary to a majority, exhilarating to a minority, and as is the case for all big technology shifts, an existential crisis to those who don’t break smart.

62/ And consistent with the general political/ideological position I generally adopt in breaking smart writings, overall, increasing sensing/actuation resolution of infrastructure is a good thing.

63/ The more fine-grained the presence of technology in our lives, the more generative potential there is for humans to level-up to new, more powerful modes of being.

64/ Whether powerful technology existing an inch from your face is good or bad depends on how good you are at using it from that locus.

67/ My big research interest over the last year has been "Great Works": understanding how people can do much bigger things with the power at their fingertips.

68/ As many of you know, I have mixed feelings about the lifestyle design crowd. One of my hopes with this newsletter is to help at least a few of you outgrow it.

69/ I hope to help many of you join the Great Works crowd, so to speak, even if you start from what is seemingly the "wrong" end of technology, the last inch.

70/ There is a nonzero-sum fortune to be created at the edge of the network. Take on a Great Work and go build out your contribution to it.