The Internet Has No Trash Cans

Here's an open secret about the Internet that all seasoned citizens of it subconsciously understand, but few dare to consciously admit to themselves: the Internet has no trash cans. There may be places that are, by institutional consensus, dark, dank places (the DarkNet is the collective term), but unlike your laptop, there are no places where stuff that's been irreversibly declared, by consensus, to be trash, goes to be "deleted". Instead, the Internet is like a natural ecosystem. All information gets 100% recycled continuously. Whatever you might think is "bad" doesn't ever go away.

So if we're not sorting collectively sorting information into "good" and "bad" buckets, what are we doing? What actually happens is a process of labeling some information normal and building institutions around it, and other information not-normal and... well, certainly not throwing it away. That would be too easy. 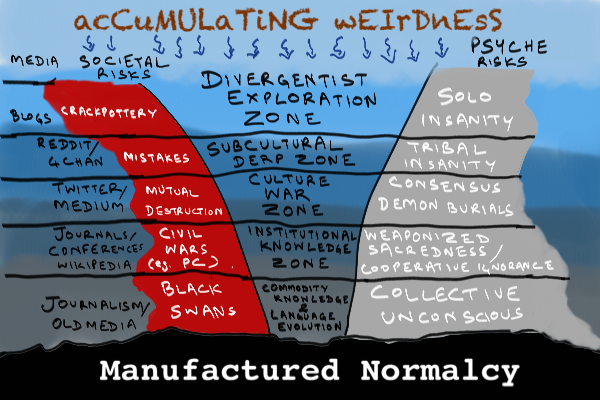 The Internet Has No Trash Cans

1/ For practical purposes, you probably hold a mental model of information processing defined by  flows that "keep" some things, and "toss" some other things.

2/ In theory, you may be a relativist who believes there is no absolute truth. In practice you throw things away. Where does it go?

3/ Poe's Law offers a clue: "Without a winking smiley or other blatant display of humor, it is utterly impossible to parody a Creationist in such a way that someone won't mistake for the genuine article."

4/ The general version is: No matter how weird, stupid, nonsensical, offensive or plain untrue an idea is to you, there's somebody out there willing to take it seriously.

5/ This is not a statement about minority fringe groups versus a majority mainstream. It is not the case that 80% of humans are normal and 20% are Poe's Weirdos.

6/ Quite the opposite. Statistically, as the sheer number of things on which you can hold beliefs explodes, chances are, you're a Poe's Law weirdo on at least a few.

9/ You might be tempted to think nobody actually takes "official" positions literally, but such people exist: uncritical belief in consensus-normal institutional truths is precisely what defines the clueless.

10/ You doubt me? If you're reading this newsletter, there's a higher-than average probability that you are atheist. Yet a great deal of the world is sincerely, literally, world-created-in-7-days religious.

11/ And guess what? If you're an atheist, outside of some weird corners of the Internet like this one, YOU are the Poe's Law weirdos. You can't be president of the US without pretending to be religious.

12/ Organized religion is institutionalized-normal, but to people like me and many of you, its deepest epistemic/ontological basis is pure nonsense, requiring fancy metaphysical footwork to sustain.

13/ Without institutions, and cadres of scholars working hard to poetically aestheticize nonsense via figurative interpretation, most religions would be indistinguishable from conspiracy theories.

14/ So the best way to understand Internet's information economy is as an endless expanding space where ideas can check in any time they like, but can never leave.

15/ You've probably seen "funnel" diagrams to illustrate filtration metaphors, where as the funnel narrows from top to bottom, "good" in some sense gets separated from "mixed"

16/ Bullshit enters at the top -- in Harry Frankfurt's sense of "indifferent to truth/falsity" (like Trump's pronouncements) -- and distilled, high quality, six-sigma truth percolates out the bottom.

17/ Rather appropriately, this model is itself bullshit. What enters at the top is more than bullshit: a mix of true, false and NEW. I call this mix "weirdness". What exits the bottom is not "good" or "true."

18/ What elevates accumulating weirdness above mere zero-sum circulating bullshit is that because it introduces novelty into the information economy, it can create interestingness and drive evolution.

19/ What exits at the bottom is not truth, "innovation" or "value" (in some aesthetic or moral sense), but institutions that embody new bits of stabilized normalcy, that rely on a clueless class to exist.

20/ The sole condition for an institution to exist is that it survive. They are like memes: if they survive, they're "good" in evolutionary terms. Towards humans, at best they can be "humane".

21/ Institutions feed on weirdness, zero in on some newness, do some minimal (largely subjective and ceremonial) separation of "good" and "bad", and thus sustain themselves informationally.

22/ With that basic model in mind, we can now understand the diagram above, which illustrates how weirdness percolates through 5 stages into manufactured normalcy.

23/ Manufactured normalcy itself comprises fully mature, seemingly eternal, institutions. The five layers above it are defined by nascent "soft" institutions, so to speak, recognized as transient.

24/ These soft institutions are defined by weaker and weaker separations of normal and not-normal until at the weirdness intake of the funnel, the distinction vanishes entirely. Here be clowns.

25/ Journalism largely lives in the world of commoditized knowledge that's in the process of being institutionalized into language itself. The adaptive function of journalism is to feed dictionaries.

26/ One level above that, journals, conferences, startups, and Wikipedia are among the first forms of embodied institutions that have the outlines of familiar institutions.

27/ Above that we have the culture war zone. Yes, an active war with its temporarily stable patterns of conflict is a soft institution.

28/ Culture wars happen between adversaries that are big enough to aspire to normalization. It's where things get "serious" because there's future institutional wealth at stake.

29/ So there's reason to fight over resources like Twitter/Medium mindshare. The fates of entire societies can depend on something trending on Twitter.

30/ Palmer "Oculus" Luckey was in the news recently for this sort of thing: trying to fund meme campaigns to influence the election.

31/ Above that we have the subcultural derp zone, where live things that haven't yet developed aspirations to normalcy and institutionalization: the world of 4Chan and Reddit tribes.

32/ These tribes are mostly at peace not because they are peaceful by nature, but because they don't yet see winnable culture wars that they might be able to ride to institutional normalization

33/ And finally, at the very top, we have the blogosphere, populated by solitary, diverging voyagers into weirdness, most who either lack a tribe of followers, or don't want one.

34/ The interesting question about each of these layers is: what happens to knowledge that is excluded by the internal processes of each kind of soft institution?

35/ They don't go away. They turn into two kinds of risks based in denial: risks to individual psyches, illustrated in the grey stack on the right, and societal risks, in red on the left.

36/ The blogger risks solo insanity. Society, by allowing bloggers to exist at all, risks crackpottery: which can result in both great discoveries and psycho rampages with guns.

37/ The subcultural zone creates risks of tribal insanity: the madness of crowds. Society risks great mistakes made by tribes on the cultural warpath, driven by fundamentally flawed epistemologies.

38/ Brexit may or may not be such a mistake. The rejection last week, by referendum, of the peace process with FARC in Colombia, is almost certainly such a mistake.

39/ In the culture war zone, as with most serious wars, the risks to the collective psyche are demons buried by consensus in the peace-making that comes after (really, detente-making).

40/ The risks to society of course, are that culture wars can turn into killing wars and massive mutual destruction. With nuclear weapons, such destruction can even be complete.

41/ These upper levels so far have always existed informally in personal diaries, and around village wells, town squares, and office coolers, but the Internet gives them powerful, custom tools.

42/ The institutional knowledge zone is where norms of civility -- born in the detente-making processes that follow war -- create decorous, but still deadly, "cold" forms of risk.

43/ The onset of civility in the socialization of knowledge is also the point at which the included/excluded knowledge begins to be marked sacred/profane in societal firmware.

44/ The "Cold War" is a canonical example. The psyche risks are in the form of weaponized sacredness and cooperative ignorance. Topics Sarah Perry often explores on ribbonfarm.

45/ The attendant societal risks of course, are that civil wars can erupt in these zones, when large groups decide to start speaking the unspeakable. This is "voice" (as opposed to "exit") politics.

46/ In the Cold War, lots of small civil wars around the world were really proxy US-USSR wars. The US Civil War was of course due to institutionalized denial of the idea that slavery was evil.

47/ Note the euphemism used back then: slavery was the peculiar institution. By consensus, nobody called it "brutal, dehumanizing horror." Today we politely call mass animal torture "factory farming."

48/ Below the institutional knowledge zone, we have the deceptively innocent seeming layer of commodity knowledge. Here, it seems, epistemic peace finally reigns. Nonsense of course.

49/ The risks to the psyche here are simple: excluded  profanity sinks into the collective unconscious. Demons are buried and forgotten rather than actively demonized.

50/ This is the stuff of "beat" reporting (known unknowns) and "move along, nothing to see here" (modeled risks). A zone policed by what Tom Whyman memorably labeled cupcake fascists.

51/ The societal risks here are a subset of the Black Swans that Nassim Taleb writes about: the ones that seem inevitable with 20-20 hindsight.

52/ And finally, at the very bottom, we have manufactured normalcy. Stuff so completely digested by human civilization, it recedes into the backdrop:

53/ It is stuff that has been collectively forgotten, but still not irreversibly trashed. There is no media corresponding to this layer because it is the world of "dog bites man is not news."

55/ This is the world of information you actually inhabit. If you want easy schemas of true/false and good/bad, where "normal" is synonymous with eternal utopian stability, you're out of luck.

56/ In the short-term, you may be able to use filter strategies. In the long term, the risks of what you're pretending to throw away will come back to bite you.

57/ Where there are no real trash cans, and where we pretend collective forgetting makes information die, we can only manufacture normalcy by also manufacturing risks for the future.

58/ But this is not a bad thing. It is the basic mechanism of civilizational evolution, because in the novelty that we institutionally digest from the weirdness the universe throws at us, there is hope.

59/ Because out of that novelty we may be able to manufacture something beyond both normalcy and buried risks: new capabilities.

60/ So in the future, when buried demons rise again to threaten the institutions we've come to depend on, we may have new ways of coming out on top anyway.

61/ So don't let the lack of unshakeable truths and absolute good, or the necessary hypocrisy of institutions, or the inevitability of demons, dismay you.

62/ Curiously enough, the fact that the Internet has no trash can is a good thing. It means that even as we let the digital trash pile up in the shadows, we ensure nothing of value is ever thrown away either.