The Next Silicon Valley

Every conversation about technology and innovation eventually turns to the "Next Silicon Valley" question and prospects for some seemingly promising second-tier hub. This conversation belongs in the Not-Even-Wrong category. The idea of the "Next Silicon Valley" is simply the spatial version of the "Next Big Thing": a kind of wishful thinking that romantically yearns for a new, pristine frontier. But the real prospects for non-Silicon-Valley software technology regions are actually brighter if you drop Silicon-Valley-envy as a frame. Why?

(p.s. This is an illustrated newsletter, turn on image display!) 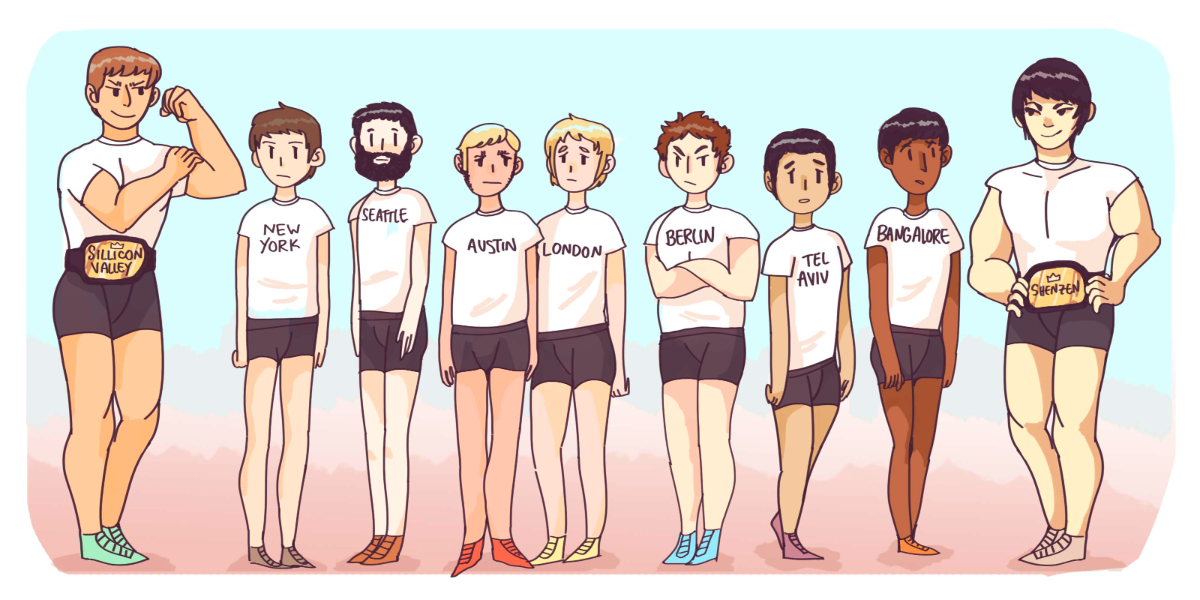 2/ Four deserve "A for effort" even though their startup scenes still pale relative to Silicon Valley. The 5th, Las Vegas, is a joke.

3/ Around the world, most such efforts are abject failures. Even if 1-2 big successes emerge, an SV-scale startup scene does not take root.

4/ NSV projects tend to be based on one of 3 terrible theories: culture begets economics (CbE), Cold War redux (CwR), Next Big Thing (NBT)

5/ CbE is the idea that a great music scene, cafes and coworking spaces create a tech scene. This theory confuses cause and effect.

6/ CwR is the idea that mimicking Cold War history - radar, missiles - can do the trick. This confuses history rhyming for history repeating

7/ NBT is the theory that some other technology, say biotech, can do for region X what software did for Silicon Valley.

8/ All three are wishful fantasies. When I hear such theories, I fell like yelling AARGH! TECH EVOLUTION DOES NOT WORK THAT WAY!

9/ Technology evolves in layers, like geological strata. Each world-eating technology adds a layer and builds on the previous one.

10/ "Eating" revolutions are special and rare. They radiate out from just 1-2 epicenters and cover the ENTIRE world over 50-100 years.

11/ The "Last Silicon Valley" was the 1870s-90s mass manufacturing revolution that radiated out from New York and the Connecticut Valley.

12/ There can be no "Next Silicon Valley" for a while because you cannot repeat an eating revolution or do-over from a different epicenter.

13/ Neither can you cut ongoing revolution short because you have macroeconomic ADD. You have to play game that's on, not game you want.

14/ There is unlikely to be a "Next Silicon Valley" for at least 50 years because it'll take 2-3 generations to absorb the impact of this one.

15/ So long as majority of potential of software eating the world remains untapped, all technology hubs will be shaped by SV gravity field

16/ Shenzen is an example. It is not a "Next Silicon Valley," but neither is it a "First Shenzen." It is shaped by (and shapes) Silicon Valley.

17/ Shenzen is neither a substitute for SV, nor independent of it, but a younger complement. A child node in an evolutionary-explosion tree.

19/ When virgin territory is colonized by humans, the first states that emerge are pristine states. They are shaped by natural constraints.

20/ Once a territory is occupied, new states emerge that are shaped not by natural constraints, but filial competition with existing states.

21/ Silicon Valley was shaped by the nature of semiconductors, and shaped the world. It is a pristine state that occupies the world.

22/ Shenzen and other hubs have been/are being shaped more by the presence and power of Silicon Valley than by Moore's Law directly.

23/ How will the geography of s/w evolve in the future? The history of New York/Connecticut Valley provides clues.

24/ As manufacturing matured, New York turned into a financial capital and technology work moved first to Midwest, then Europe, then Asia.

25/ In the process it was commoditized. Today's geography of manufacturing is shaped by proximity to unskilled labor, raw materials, markets

28/ But while pristine innovation dominates, advantage is with regions with high concentration of creative labor and financial capital.

29/ s/w is unlike manufacturing in 2 ways: One, there seems to be no natural plateau beyond which proximity factors trump product innovation

30/ Two, human creativity is the dominant raw material. Not counting electricity for data centers, there is no other supply to "control".

31/ SV's advantage lies in its ability to unleash, not minor trickles, but huge floods of talent at product scaling opportunities.

32/ SV is like a hydraulic empire of human talent. Instead of Egyptian pyramids, we get unicorn companies. https://en.wikipedia.org/wiki/Hydraulic_empire

35/ Other hubs can get there, but not through naive formulas like CbE, CwR and NBT. Talent liquidity at scale is not THAT easy to achieve.

36/ As virtual collaboration, VR tech improves, entirely virtual hubs will also join the fray. The second tier is going to get interesting.

37/ The role of "pioneer" has already been claimed by SV, but there are plenty of roles to be filled in the software-eating-world drama.

38/ Make no mistake: some of these roles may be less sexy and lack pioneer bragging rights, but might be MORE economically valuable.

39/ Reaching towards your region's unique software destiny is the game of regions breaking smart. Stop wasting time on SV-envy.

40/ How do you get there? For starters, read http://breakingsmart.com if you haven't already.