The Only Millennials Who Matter

Millennials are center-stage right now. In the US, they are widely regarded as the power behind Bernie Sanders, allied as a generation against their parents, the Boomers. The massed, aggregated power of Millennials on display on political stages worldwide is misleading. Almost none of them matter. Most are merely struggling hopelessly for direction in anomie and will be forgotten in 20 years. The only Millennials who actually matter come in two flavors: institution builders and institution destroyers. Think Mark Zuckerberg and Martin Shkreli respectively. What these two minority subgroups of Millennials do will shape the environment of the next generation that will actually matter en masse: the Z's, born after 2000. Here's the breakdown. 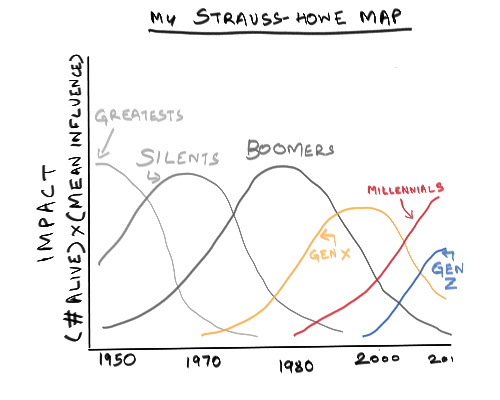 1/ The Strauss-Howe generational cycle theory, for all its flaws, is a very useful frame of macro analysis.

2/ Once you eliminate life-stage effects, you're left with the systematic effects of the environment on demographic cohorts.

3/ These cohorts are fairly well-defined statistically due to peaks in births, and are about 15-20 years apart. The kids of cohort N constitute cohort N+2.

4/ The picture above roughly sketches the generations alive today and in recent history, in terms of rise and fall in "impact," loosely defined as "# of members alive times mean influence."

5/ Both the character of a generation and its impact are shaped by big, environment shaping events, though there's a lot more mixing and volatility across cohorts now than in the past.

6/ The Boomers were shaped by the Cold War and Vietnam. The Gen X'ers by deregulation and the end of the Cold War.

7/ Millennials, like the "Greatest Generation" (which fought World War II), are shaped by an environment of failing or failed institutions and rising new ones.

8/ Institutions are how average people have leveraged impact. When institutions are healthy, the peaking cohort is mostly silent, but highly productive. The "Silents" (parents of X'ers) were of this sort.

9/ When institutions are either old and failing or young and immature, the peaking cohort has no easy path to leveraged impact, so most just end up being low-value warm bodies fueling mass movements.

10/ The economic "value" of a debt-laden, unemployed, Iraq-veteran college grad Millennial is about 1/100th the value of a high-school grad Silent in rapidly growing 50s/60s America.

11/ Institutional leverage is a much more accurate model of economic and cultural value for average humans than measures like total factor productivity which emphasize technological and macroeconomic effects.

12/ Productivity can undergo secular increase as experienced by the wealthy even as institutional leverage for average individuals cycles up and down. This is inequality in a nutshell.

13/ All the noise about average Millennials as a group, positive or negative, can be ignored. It does not matter whether they are entitled brats or hard-working war heroes saddled with bad luck.

14/ Because the environment is not set up for them to matter, except as cannon fodder in wars, and angry, warm bodies in mass movements. They've been reduced to a low-value commodity.

15/ Which brings us to the two exceptional kinds of Millennials. The Zuckerbergs and the Shkrelis: smart, and daring enough to play as individuals in a youth-commoditizing environment.

16/ Mark Zuckerberg (born 1984) is building several new kinds of institutions. In a software-eaten world, builders can emerge very young and enjoy long careers. If we're lucky he'll do great things for another 30 years.

17/ These builders are mostly irrelevant to their own Millennial peers. What they are building will create leveraged life environments for the next generation, the Z's.

18/ Martin Shkreli (born 1983) is exposing and exploiting the  deep corruption in the pharma industry. He will probably quickly go down in a blaze of anti-hero glory. Anti-heroes have short careers.

19/ But in the process of going down, he will probably take a portion of several corrupt institutions with him. That's how failing institutions die: not naturally, but torn apart by anti-heroes.

20/  Edward Snowden (born 1983) is further along in his short career of impact, and has already precipitated a deadly game of chicken between the US government and Silicon Valley.

21/ The creators are easier to admire, root for, and support. The destroyers are often deeply flawed people it's hard to feel sympathetic towards. But their systemic impact is undeniable.

22/ The creators and the destroyers. The heroes and the anti-heroes. The Exeter/Harvard kid and the street-fighting brawler son of janitors from Brooklyn. Prof. Xavier and Magneto.

23/ The age-old mythologies may be caricatures, but they do capture significant truths. These are the Millennials who matter.

24/ What about the rest? Not everybody has the talents or positioning to be a hero or anti-hero. Let's examine the precedent of Gen X to understand what's in store for them.

25/ Like the Millennials, Gen X represent a civilizational "down round" culturally (they were valued less as individuals, and on average had to fight harder than their parents). But in other ways, X'ers are radically different.

26/ Gen X'ers like me (born 1974) came of age in the earlier stages of decline of the old, when the new didn't seem too big a deal. Learning coding in the 80s, computers felt like just another toy, not the seed of a new world.

28/ The big difference is that Gen X is a demographically small generation, and came of age when aging institutions still had life in them, and new ones were just getting seeded.

29/ Gen Xers entered the workforce starting in the mid-80s, and their main individual-contributor working years are just winding down.

30/ Today, the youngest Gen Xers are pushing 40, and taking over senior management and leadership positions. Most are creatures of institutions, even ecosystem bums like me.

31/ We are lame duck managers and leaders (and consultants) because our generation is small and transitional. We are neither creator/destroyers, nor preservers.

32/ Instead, we are temporarizers and band-aid-ers: making sure shit holds together long enough to let young institutions grow up and take the load that's about to descend on their shoulders.

33/ Most Gen X'ers figured out their lives as individuals, not collectively. It wasn't as easy as for Boomer lives, it took more work and active risk (terrorism and layoffs instead of nuclear winter).

34/ Gen X'ers have a reputation for cynical realism that has mellowed a bit as we've aged, but is still mostly true. We never did bold visions. We used to be apocalyptically gloomy, but have cheered up somewhat in our middle age.

35/ The compensation for being a "down but not out round" of humanity (not much was expected of us except "survive this shit please") is that we have perhaps the least false consciousness among the generations alive.

36/ Having a more realistic and clear-eyed view of reality is good for keeping shit together, but not so good for doing radical things in either a heroic or anti-heroic vein.

37/ For Gen X, breaking bad and breaking smart were both individualistic acts. Walter White in the show broke bad in a classic Gen X way. The "In a world...One Man" movie trailers are about us.

38/ Breaking Smart meant being part of the 90s Silicon Valley boom for the lucky ones, milking value out of dying-but-not-dead institutions for the not-so-lucky ones.

39/ At the risk of self-congratulation, I'd hypothesize that Gen X'ers were/are more culturally creative than either Boomers or Millennials.

40/ When institutions are in churn, but not in critical collapse, people tend to feel lost and make/consume art to make sense of the world. The Lost Generation of Hemingway etc. was kinda like us X'ers.

41/ For Millennials though, if you're not one of the heroes or anti-heroes, both breaking smart and breaking bad are going to be collective actions. No "In a world... One Man" movies about you.

42/ Making art is likely a luxury most Millennials can't afford. There's too much more serious work to do, and raw survival is a bit too chancy. Of course, this is just a statistical guess based on a speculative theory.

43/ For the average, non-exceptional Millennial, breaking bad means joining some mass movement, and adopting some sort of false consciousness fueled by anger.

44/ For the average, non-exceptional Millennial, breaking smart means joining one of the frontier communities around tech, building your community, networks, and social capital. And figuring out the best playbook to adapt and use.

45/ Whether this is learning to code, making it as an Etsy merchant, blogging, or joining the indie game-dev world, the key is to build your life around a skill and social connections and not rely solely on existing institutions. They will fail you.

46/ Emerging institutions will provide more hospitable ecosystems for you, but don't expect things to be mature and perfect. You are early beta users of minimum-viable institutions designed for Gen Z.

47/ There will also be "shorting" opportunities around failing old institutions, but these typically take fewer people to exploit, since destroying is easier than creating. These will also be higher risk and more morally hazardous.

48/ Whether you ally with heroes or anti-heroes, it takes hacking skills of some sort to survive as a Millennial. Not necessarily coding: it can be marketing, community building or whatever.

49/ Without a grounding in a hacking skill, you're cheap fodder for co-option into, and manipulation by, some mass movement that will use and then discard you.

50/ The youngest Millennials are now graduating high school. They'll be the last of a frontier generation before a new institutional landscape matures for those who come after.

51/ These will be the Z's, who will likely be like the Silents, a new kind of "Organization Man/Woman" enjoying a less noisy "no news is good news" world.

52/ These will flesh out and mature the institutions being created by the exceptional Millennials. They will enjoy higher individual leverage and be an "up round" overall.

53/ This unfolding era of institutional destruction and creation is the theme for Breaking Smart Season 2, which I am researching now. You'll see more newsletters on this theme in future.

54/ If you're playing hero or anti-hero and building new kinds of institutions or taking down corrupt kinds, I'd like to hear your story. Just reply to this email to start chatting.

55/ And in general, whatever your age, strap in. It's going to be turbulent for a while. Us lame-duck X'ers will try to keep it together for now, but it is not going to be a smooth ride.