The Politics of Productivity

There is an urban legend (probably originating in an episode of Dragnet) about a gang of clothing store thieves whose modus operandi was to use a long stick to remove large numbers of clothes from racks at once, allowing them to rob stores very quickly. According to the urban legend, the gang was caught when one store, at the suggestion of a cop, arranged its clothes with alternate hangers facing opposite directions (see photograph below). This messed up the efficient de-racking and slowed the thieves down by forcing them to remove one hanger at a time.

The story illustrates a point that many don’t appreciate: productivity is politics. Organization is about adversaries vying for control of a system. The most important reason you should be interested in the topic of productivity (whether you favor GTD, 7 Habits, or KonMari) is not to get “organized” or “efficient” for its own sake (a recipe for runaway OCD), but to gain political control over your life. Otherwise you risk someone else taking control. There is no such thing as a "disorganized" state. Every state of organization is a means of control for somebody. If you don't know who that is, it probably isn't you. With automation and software, the question of who is benefitted by a particular pattern of organization (or apparent chaos) becomes even more critical. So in honor of Labor Day, here's a primer on the politics of productivity. 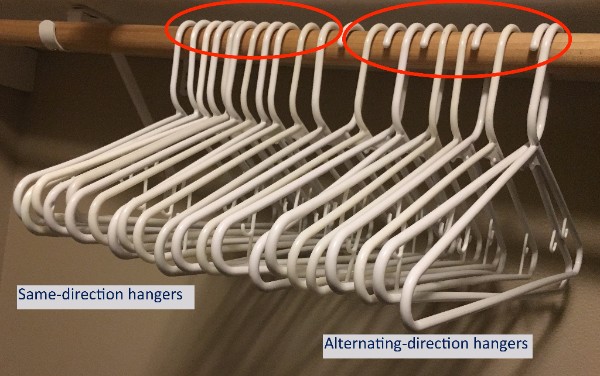 1/ The story of the clothes thieves suggests a definition of organization: degeneracy in the arrangement of system elements to induce uniformity in flows and behaviors.

2/ This is the external way to create habits, by squeezing out variation from the environment. It is much faster than the internal way: learning to accommodate variation.

3/ A basic problem in manufacturing for example, is to design material handling systems that reorient randomly oriented parts coming down an assembly line in uniform ways.

4/ In everyday life, in processing a pile of paper, sheets oriented the wrong way break up formulaic handling, and interrupt attention focused on the content of the sheets.

5/ A good metaphor here is magnetism. Remember the diagram from high school showing magnetic materials as being composed of randomly oriented dipoles?

6/ A piece of iron gets magnetized when its atom-scale dipoles (or more precisely, small local clusters of such dipoles called domains) become oriented the same way.

7/ An organization system is a "field" that "magnetizes" a "flow" to make it more powerful by inducing certain uniformities. I wrote about this field/flow mental model in Tempo.

8/ All these examples and metaphors tell us that the external environment of habits is as important as internal cognition patterns and discipline in productivity.

9/ Temporal flow uniformity is the basis for industrial efficiency, economies of scale, and "learning". Low-information repetition is what organization is designed to support.

10/ Organization simplifies a domain by making some parts of it uniform across time, allowing the associated behaviors to sink into the unconscious with low learning effort.

11/ Lowering effort by creating uniformity is central to the politics of productivity. To make an aspect of a domain uniform is to choose not to learn about a dimension of variability.

12/ This leaves conscious attention free to focus on residual variation that IS of interest. A system of organization partitions attention into conscious vs unconscious.

13/ The conscious part is actively learning about some aspect of domain variability. The unconscious part has either already learned or is dealing with a degenerate dimension of manufactured uniformity.

15/ This boundary between uniform/non-uniform is a political one, since your attention and learning energy can be directed with it.

16/ Magicians use it to entertain, Facebook uses it to sell ads. Brands use it to save you the effort of mindful thinking about choices ("nobody ever got fired for buying IBM")

18/ Google limits programming languages that can be used in its products, allowing centralized strategic leverage over hiring and assignments. Southwest flies only 737s for similar reasons.

20/ Industrial "habits" are formed by squeezing all potential for learning out of repeatable activities so that they become predictable: aligning the hangers basically.

21/ By contrast, what you might call "organic" habits are created by learning to handle variation rather than squeezing it out. The "unconscious competence" of martial arts.

22/ This dichotomy is not limited to humans. In manufacturing, the same idea shows up in two approaches to material handling, requiring different amounts of intelligence.

23/ In the first method, you build a part orientation mechanism, like a vibrating hopper with a hole at the bottom that only allows parts to move to the next stage in one orientation.

24/ In the second method, you let parts flow without a forced orientation, and program an industrial robot to use machine vision to pick up and handle parts in any orientation.

25/ The second approach requires the robot to be much smarter than a functionally equivalent machine that can only handle the "right" orientation.

26/ The first kind of assembly line is fast, cheap and efficient, but hard to reprogram. The second kind gives up some speed and takes on some complexity, but is more flexible.

28/ Most importantly, in the robot solution there is more power in the system overall, since it has imposed less uniformity and chosen to actively learn about more variability.

29/ The vibrating hopper uses noise energy (ignorance) to induce uniformity, and forgoes the possibility of extracting a signal from the "noise" of varied part orientations flowing through.

30/ Taken to the limit, the ultimate kind of mindful habit formation would eschew ALL imposed uniformity and learn about ALL the variability. The slowest learning curve.

31/ This is illustrated in Eugene Herrigel's Zen in the Art of Archery, where a teacher gets offended by a student learning a trick/hack to speed up learning.

33/ As the opening hanger-thieves anecdote illustrates, the moment you create a dimension of uniformity to save yourself learning, you also create an attack surface.

34/ This is what it means to make a system legible in the sense of James Scott in Seeing Like a State. You should only do it if you also have the power to defend the system.

35/ The point becomes obvious when you consider things like passwords. Unlike things you want to handle "efficiently," passwords must be chosen to be varied and different.

36/ To turn the point around, you probably don't want to steal from powerful criminals even if you know their passwords. Mafia bosses can leave their front doors unlocked.

37/ To create legible organization is to assume nobody is working against you, or that you are powerful enough to control them through intimidation and fear.

38/ The moment well-matched adversaries enter the picture, organization acquires a cost, and obfuscation of organization and chaos acquire value.

39/ The weaker you are, the more obfuscated your organization must be to resist control. If you are really weak, you must actually behave chaotically, not just obfuscate order: give up efficiency for security.

40/ Weak rebellions foment in slums. Military bases are orderly. The illegibility of slums is about the only defense available to the weak. If you have fighter jets you can be visibly organized.

41/ Of course, chaos can also be an instrument used by the strong against the weak. It depends on who created the chaos, whose attention it divides, and how.

42/ Though my personal politics are in general pro-business, it is undeniable that businesses have historically not shied away from using both order and chaos for control.

45/ A machine learning system is only as good as the patterns of uniformity and variation in its training data. To ignore this is to be naive. To work with the phenomenon is to do software politics.

46/ A system trained on the gestures and body language of "successful" employees to guide hiring of new ones will simply uncritically transmit biases from humans to software.

48/ The phrase "below the API" (API: application programming interface) has gained currency for this aspect of the politics-productivity nexus.

49/ The API is an architectural boundary between insiders/outsiders of a system. Uniformities, variabilities and learning potentials across entire ecosystems are shaped by APIs.

50/ The industrial mass-production factory had highly visible and coarse uniformities (including uniforms for workers and future workers: school-kids).

52/ In some cities, green regulations plus self-interest result in the Toyota Prius (a hybrid) being the most common rideshare vehicle. Other uniformities are in software.

53/ With each such uniformity, you have to ask: how does it divide attention? Whom does that division of attention benefit? Who is learning what kind of variability?

54/ Organization is inseparable from creating order out of chaos, fragility out of robustness, politics out of degeneracies, and power structures out of uniformities.

55/ This is neither bad nor good. Neither industrial or post-industrial. It is in the very nature of how technology, intelligence, and agency interact in a collective.

56/ In my blog post You Are Not an Artisan, I called work that lends itself to digital organization algorithmically scalable work. This is the political battleground of 2017.

57/ This is work that can be arranged to support automation through large platforms, machine learning systems, API-based system boundaries, and so on.

58/ We are entering an era where all algorithmically scalable work is gravitating to machines, and all emerging organization is designed to enable that migration.

59/ Algorithmically unscalable work is what humans are valuable for. It involves slum-like rhizomatic patterns of organization and demands more political savvy to navigate.

60/ And this is where there is good news. In the industrial age, a few people and institutions controlled vast uniformities. Today, anyone can draw political boundaries.

61/ So next time you are revamping your organization system, or a code-base you maintain, forget about efficiency. Put politics first. Don't be afraid to create politically potent disorder.

62/ Think hard about where to draw boundaries, where to create uniformities, and where to leave natural variability, what to defend, what to obfuscate. You'll thank me later.

_PPS: If you've only read my writing on Breaking Smart, you may be interested in a set of ebooks I just released, compiling some of my older Ribbonfarm writings. _