Silicon Valley style technology innovation is a brutal game, and certain strategic errors can get you kicked out of the game before you even start. One of the big errors which I often see talented young people without work experience commit, and which I've never personally seen experienced people commit, is what I call the situated-is-incremental fallacy. This suggests that this is a fatal, career-killing error. The fallacy is this: concluding that just because something is grounded in, and informed by, practical environmental realities and context, it cannot be technologically radical. Where experienced people separate the incremental/radical axis from the detached/situated axis, inexperienced people often conflate them. Getting past this fallacy is not even a strategic thinking skill. It is basic strategic literacy. Here's how to get literate and internalize the truth that just because something is practical, it does not mean it is not radical. 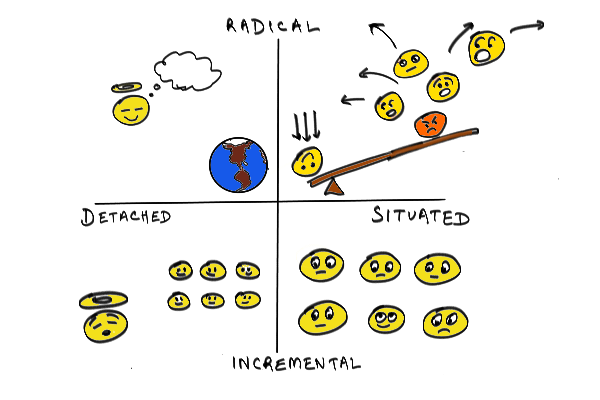 1/ Modeling and adapting to a business context is boring and time-consuming. Chasing the aha! of disruptive strategic intuition is exciting.

2/ Business as usual and things working the way you're used to is boring. Radical results are exciting.

4/ The way technology is marketed doesn't help. By focusing on the novel, it tends to throw off our calibration of the degree to which the effort behind an innovation is _not _novel.

5/ When we read press coverage of the Oculus, CRISPR or the SpaceX barge-landing, all attention is on the novel, exciting elements. The part that is not being done differently is ignored.

6/ But from the inside of any major technology, 90% of the energy and money is invested in understanding existing context, and learning to do things the way they're already done elsewhere.

7/ This does NOT mean the outcome is incremental. The effort devoted to novelty may be marginal, but it is far more leveraged.

8/ Radical impact is usually the result of spending 90% of your energy arranging the boring stuff in the context, so that the 10% novel effort has big consequences.

9/ Strategy could be defined as situating yourself in the environment in a way that your incremental innovation effort produces radical differences in the outcome, via leverage.

10/ An example is SpaceX. 90% of what they do is standard rocket launching technology. But the 10% the do differently: welding technology, first-stage recovery, has a radical impact on the economics.

11/ People who succumb to the situated-is-incremental fallacy end up trying to do all 100% differently, rather than the smartly leveraged 10%.

12/ Often this is due to nothing more than a revulsion against the "ugliness" of COTS (commercial, off-the-shelf) inputs available, or their lack of harmony when combined.

13/ Another reason is, in a complex environment full of legacy technology, reinventing the wheel is often far easier and more fun than sourcing and assembling existing tech.

14/ The small problem with reinvention is that it replaces 1 hour of annoying "buy" work with 10 hours of fun "build" work. The 10x bigger problem is that it creates pointless fit-into-context extra work. A sort of technological transaction cost.

15/ A wheel is not just an embodiment of abstract principles of geometry and the physics of rolling. It is also a 1000 details like standard bolt sizes, sheet metal thicknesses, and so forth.

16/ Every act of unnecessary invention means going against the technological environment in a 1000 tiny ways. Seeking internal harmony in what you build often means losing valuable potential for external harmony with the environment.

17/ Not-reinventing is boring and tedious. You have to learn and adapt to a 1000 arbitrary default details. But the reward is, what you make is 90% ready to fit efficiently into the environment. You won't even realize some of the value until later.

18/ These observations can be plotted on a neat 2x2, as shown above.

19/ Those who succumb to the radical-is-situated fallacy tend to give up either the 'radical' bit or the 'situated' bit, or both.

20/ If you are practical, but unambitious, you ignore leverage in the environment and do incremental, situated things. They don't matter much, but they do fit.

21/ If you are impractical, but ambitious, you end up trying to reinvent 100% and failing. Often this is accompanied by utopianism (or pastoralism as I call it). This is like trying to mutate 100% of the genome of an idea.

22/ If you are both impractical and unambitious, you will do incremental, detached things that might as well be hobbies. They don't matter, and they don't fit.

23/ But if you are both practical and ambitious, you will scan the context for the the high-leverage opportunities, and invent or reinvent the minimum you have to.

24/ Some of you may be seeing shades of Clayton Christensen's disruption model, which makes a distinction between radical versus incremental technologies and disruptive versus sustaining business models.

25/ The biggest-bang technology innovations happen when radical technologies (a leveraged 10% of inputs being reinvented) are combined with disruptive business models.

27/ You can also, of course, have radical technology that creates new markets in non-disruptive ways, from the premium end of the market rather than low end for example (as in the case of the iPhone)

28/ But whether disruptive or not, radical technological innovation is almost always driven by the invention/reinvention of a leveraged 10%, and doing the other 90% in business-as-usual ways (ie imitation).

29/ Are there technologies where the invention-to-imitation ratio is much higher? Perhaps. If you can think of good examples, do share via reply to this email.

30/ But remember, the bar is higher than you think. Even the airplane was largely a matter of applying mature component technologies from things like bicycles, sails, and IC engines, which already existed.

31/ In Boydian theory, this principle is often called the snowmobile principle: innovation happens by breaking down and reassembling existing things in new ways.

32/ Bottomline: if the effort of being "practical" demotivates you and makes you feel like you're giving up the "big" vision, you need to improve your sensitivity to environmental leverage.