The Six Modes of Dangerous Curiosity

The hardest thing in the world is to allow people who are different from you to ask questions whose answers may be used against you. The second hardest thing in the world is to be the one asking such questions. These are dangerous questions because the answers come with the power to harm others, but without obvious reasons to not exercise that power. Questions whose answers come with a stiff dose of moral hazard.  If there is a power asymmetry between those asking the question, and those who might be affected by the answers, then the questions are doubly dangerous. The power of the answer might be used in a leveraged way: existing power being added to the power of the answer. Yet everything good in human history also seems to have come from the power to ask dangerous questions.

Civilization, in many ways, is the safe cultivation of dangerous curiosity. The sophistication of a civilization may be judged by the kinds of dangerous questions its members allow themselves to ask. 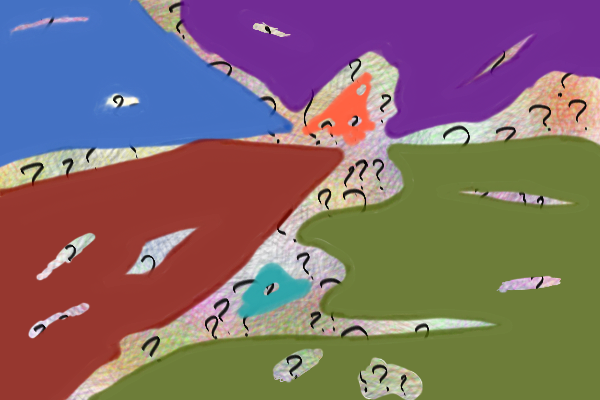 1/ A dangerous question is one asked by someone different from you, whose answer might be used against you. We tend to use any power we might have to prevent them being asked.

2/ Societies are  defined by the questions they successfully prevent from being asked: taboo questions. The stronger those threatened by them, the stronger the taboo.

3/ We can distinguish six modes of dangerous curiosity based on how recently they emerged historically: tribal, ideological, legalist, ethical, caring, and scientific.

4/ In tribalism, the only people allowed to ask questions that can be used against you, are people who are sufficiently like you. This is a strong and conservative safety condition.

5/ Tribalist curiosity cannot ask questions where the person best equipped to answer is too different from the person who might suffer the biggest downside from a likely answer.

6/ Ideology offers a more scalable mode of dangerous curiosity. By allowing all questions consistent with existing beliefs, you can ask more questions.

7/ If you and I share a sincere belief that "violence is never acceptable," then I can let you ask any question that might give you power of violence over me, even if we are radically different in other ways.

8/ Ideological curiosity though, cannot allow questions that undermine the ideology itself. An ideology is conservative by construction, even when labeled "progressive."

9/ Leveling up once more, we have legalist curiosity. If you and I agree on a set of procedural rules, and accept the consequences no matter what they are, we can ask questions ideologies cannot.

10/ With legalist curiosity, we can enter truly uncharted territories: we accept the consequences of certain mechanical behaviors without having a clear idea how novel or weird they might be.

11/  Many traditional cultures can be described as ideological by default, legalist by exception: most behaviors are governed by thou shalts or thou shalt nots, but a few are defined by game rules.

12/ In traditional cultures, these game rules generally describe finite games, where the aim is to win rather than to continue play. Johan Huizenga's Homo Ludens is a great study of such cultures.

13/ Traditional cultures enter the stage of legalist curiosity cautiously: by first strengthening their procedural muscles in domains where the space of outcomes admits a finite description.

14/ Legalist curiosity though, hits its limits where it runs into human weakness. A finite game is only as good as people's willingness to trust that others will not cheat or subvert the rules.

15/ This brings us to ethical curiosity. At its simplest, an ethics is a unilateral commitment to think about unknown future consequences of actions in certain principled, but not legalist ways.

16/ Ethics is the "spirit" of the law. When following the rules of a game brings you to a novel and possibly undesired state, you commit to re-examining those rules with a sensibility you strive to consistently embody.

17/ The ethical stage of dangerous curiosity is the first that requires us to evaluate and trust other humans as individuals, rather than as robots governed by larger systems of behavioral prescription.

18/ An ethical posture, unlike identity (tribalism), belief (ideology), or procedural trustworthiness (legalist) is hard to judge for credibility in any formulaic way, so it demands individual judgment.

20/ But an ethical posture can only be credibly tested by observing it in action in a series of new situations, where you can watch a person deal with situations they did not anticipate.

21/ An ethics cannot be determined based on identity, stated beliefs, or demonstrated procedural skills. Only revealed by a history of dealing with surprises and rule-stewardship events.

22/ While there can be "meta rules" in an ethics (such as the veil of ignorance or precautionary principle), unlike a code of law, they do not define and fully cover a domain. They are of heuristic value at best.

23/ When you trust somebody at an ethical level, you trust them to react to novel situations by updating the game in ways that keep it going. Ethics is where the shift to infinite games begins.

24/ The limits of ethical curiosity are defined by the limits of intelligence. When the world is complex and responses may involve mistakes, you need repetition and iteration to learn, and get it right.

25/ So the next level of curiosity is characterized by caring, which can be defined as trust that "whatever the answers, we're in this together till we figure it out to mutual satisfaction."

26/ A caring civilization can ask dangerous questions where it might take a lot of trial and error to get things right, and long periods of unfair distributions of reward and harm.

27/ Caring allows play to continue despite formal game rules being in a messy state and reality being too complex for ethical postures to be easily judged. It adds the element of perpetual beta.

28/ To pursue dangerous curiosities in a caring mode is to simply commit to staying involved with others who are not like you as consequences play out. To enter into a true infinite game relationship with them.

29/ This is a level at which we promise not to abandon others, and where we expect to forgive and be forgiven for unintended harms from our dangerous curiosities that we cannot contain.

30/ To many, this is the fifth and final stage of evolution in modes of dangerous curiosity. Historically, as Hannah Arendt observes, this emerged with Christianity, with its focus on forgiveness.

31/ Yet, there is a kind of dangerous question that exceeds the capacity of the caring mode. The problem is that as society gets more complex and big, invisible relationships outnumber visible ones.

33/ This brings up the deep challenge of using the fruits of dangerous curiosity to make and break infinite game relationships in principled ways, and dealing with accumulating irreversible change.

34/ People who think of themselves as "good" try and enter into caring relationships with anything that can be harmed, all the way from their identical twin to any living thing and even non-living things.

35/ Yet, knowing and persistence are a precondition to caring. You cannot care about what you don't know even exists in a relationship to you. You cannot care for the newly born the way you cared for what just died.

36/ This is where the scientific sensibility and its mode of dangerous curiosity comes in. It is curiosity about questions where you don't know who or what the answers might put you in a relationship with.

37/ For instance, you cannot care about Bolivian miners until you know that Bolivia exists and that much of the Lithium in the world, which is in all your batteries, is mined there.

38/ Our world is a complex, differentiated and varied place. Whether you recognize it or not, your small, local neighborhood, full of people, animals and things you try to care about, is not an island.

39/ Unless you are willing to live with Amish levels of self-contained isolation and avoidance of modernity, your life depends on vastly more invisible relationships than visible ones.

40/ Scientific curiosity is not defined by a methodology. That's a legalist misunderstanding of science. Consequently, it cannot be contained by "ethical" or "caring" levels of self-regulation.

41/ Scientific curiosity can be defined simply as the imperative to expand the number of things you ask questions about, and enter into relationships with, even when you have no obvious reason to.

43/ To explore is to deliberately enter into new (or newly conscious) relationships with things you did not know existed, which might already be harming you or in a state of being harmed by you.

44/ Pros: you might discover harm you're unwittingly complicit in, by virtue of ignorance, both to yourself and others. Cons: you might open up new modes of harm that didn't exist before.

45/ Each pre-scientific kind of dangerous curiosity induces a particular kind of relationship of mutuality with a thing or being you already know exists.

48/ What makes scientific curiosity the most dangerous mode of curiosity is that it makes your understanding of what it means to be good relative to what you know.

49/ This means that the dangerous curiosity of the scientific sensibility leads inevitably to moral relativism: the idea that what is good exists only in relation to what you already know.

50/  Which means the relationship of mutuality it creates and accept is one based on the most demanding commitment you can make to another person: the promise to grow together, even if it means growing apart.