The Splintering of the Second World

I just returned from a week-long business trip in Europe, my first since 2015. In the past, I've always returned from trips to Europe with a renewed sense of why the US was the only place to be for ambitious, hungry people, even though Europe is much nicer in many ways. But I suspected this time would be different, and it was.

This time, I got a keen sense of the US having lost an essential spiritual quality necessary for mass flourishing. It is a quality that has, for decades, been the source of American soft power globally. A quality that used to make the US an invisible presence in any meeting or conference room anywhere in the world. An 800 lb gorilla reminding everyone where the frontier action was. There might be theoretical utopias that were better than the US, and real nations that beat the US in a couple of narrow ways (better coffee, tastier vegetables, better healthcare), but there was no real place that was overall a better place to try to be fully human. For decades, the US served not just as the sole superpower, but also as a True West, the direction of the endless frontier, the place you went to if you wanted to self-actualize (by analogy to True North as a moral compass heading).

Learn English, go to America, be all you can be.

Evidence of the power of Brand America: even Africans, knowing the history and continuing toxic legacy of black slavery in the US, still wanted to immigrate to the US. 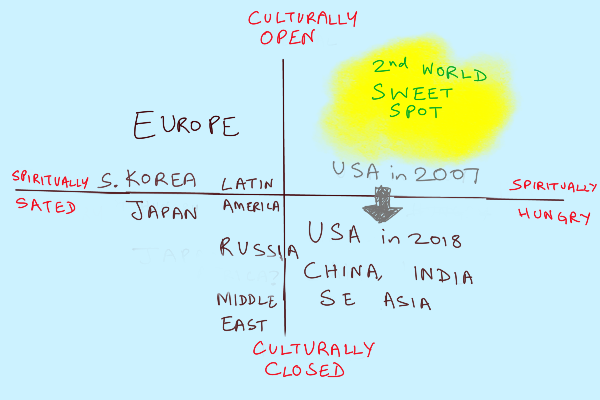 1/ There has been a sea change in how the US is perceived in the last two years. It no longer represents True West, the direction of the frontier of human development.

2/ With the loss of True West status, the US has lost much of its soft power. It has been reduced to a mere military/economic Great Power, like the USSR in the past or China today.

4/ By cultural openness, I mean active and indiscriminate demand for cultural imports to fuel your own culture's growth. A condition that requires a sense of cultural security.

5/ Cultural openness leads to active seeking of foreign ideas, and usually immigration as well (authoritarian cultures often seek to import the "best" ideas and occasionally the "best" people as well, but rarely see the subtle benefits of more random filters).

6/ By spiritual hunger, I mean a sense of exploratory restlessness and dissatisfaction with the settled arrangements of a stable society, and a desire for transformative growth at all levels.

7/ What Americans call the frontier spirit is really a national willingness to give up some achievable first-world quality of life, and take on some voluntary hardship, in order to keep growing, by chasing a frontier.

8/ I think the global locus of cultural openness+ spiritual hunger should be called the second world. It is the Goldilocks zone of worlds, preferable to both first and third worlds. Civilizational evolution happens in the second world.

9/ The first world is culturally open, but spiritually sated (Europe today). The third world is spiritually hungry, but culturally closed (much of China and India). One lacks the desire for growth, the other the ingredients for it.

10/ Neither is conducive to mass flourishing, and neither can be home to a true frontier zone or serve as a True West for the world.

11/ Countries like Japan and Korea managed to leapfrog from third to first world without ever going through a second world phase. True West never pointed towards them.

13/ The not hungry/not open quadrant should probably be called the zeroth world. A zone that is not really striving to evolve, let alone become the frontier of human development.

14/ The world can only have a True West during periods when it contains a second world region that is significantly bigger than the rest, with a global sphere of influence.

15/ True West is self-reinforcing, as the existence of a True West leads more people to head that way, increasing its size and influence, thereby strengthening it.

16/ Arguably, the US has been the only True West in history. For several decades ambitious and hungry people everywhere in the world wanted to go to the US.

17/ The US has never been a first or third-world nation because it has never lost its spiritual hunger, and has enjoyed generally increasing cultural openness.

18/ Until now, that is. The cultural closing of America has suddenly left the world without a True West, and also with a vastly shrunken second world.

19/ The second world still exists of course, but is now much smaller, and fragmented across many (mostly urban) parts of the world, none dominant enough to serve as True West.

20/ This means, for a young, ambitious, and hungry person today, there will be no brain-dead simple answer to the question, "where in the world should I go to make a dent in the universe?"

21/ This is really quite an astounding change int he global cultural zeitgeist. When I was in college in India in the early 90s, the US was absolutely dominant as True West.

22/ This meant that most people, if they had any kind of spiritual hunger at all, chose to go to the US if they could, often via very difficult and indirect pathways.

23/ I have friends who spent years or decades working or studying in Singapore, the Middle East, Australia, Canada and Europe before finally "making it" to the US. The global dream was to get to the starting line of the American dream.

24/ Even those who planned to eventually return to their countries of birth viewed a stint in the US (rather than somewhere else) as the essential global growth experience.

25/ I suspect this globally "magnetized" condition is gone for at least a generation. Possibly for a century or more. True West is no longer a direction in the external world, only in individual minds.

26/ This means, around the world, people will choose differently, resulting in a fragmented frontier, much of it online rather than attached to a geographic locus.

27/ The upside of this is that we will see a period of much greater diversity in the evolutionary pathways being explored by humanity.

28/ The downside is that due to loss of the benefits of concentration of creative capital, evolutionary pace overall will be slower. Human efforts at evolution spread too thin.

29/ If you are young today, with some capacity for global mobility, you should still try to spend some time in the US, despite the increasing pains of getting in or staying on.

30/ But I couldn't in good faith recommend to anyone today (as I used to in the past), "just forget everything else and try to get to the US".

31/ Today I'd say you should sample as many regions as you can before picking one, and continually invest in online frontiers (even despite all the culture wars, bots and trolls)

32/ There is no True West anymore, but Planet Earth still contains a second world, with an active frontier, hiding in the interstices of zeroth, first and third worlds.

33/ The retreat of the US from its role as the world's frontier, and the loss of a True West for growth-oriented individuals, is undeniably depressing in the short term.

34/ But in the long term, this might be the best thing that could have happened, since we've effectively just dismantled a monopoly on frontier culture (Silicon Valley included).

35/ That doesn't mean there are no risks to the current condition. The second world, unlike the first and third worlds, is unstable and takes active effort to sustain.

37/ This takes a certain amount of frontier courage, especially in a world where scowling people with guns at borders seem to be dominant.

38/ The nice thing though, is that we do still have the Internet (though that too is under threat) with its no-visas-needed capacity for fostering second world institutions and networks.

39/ So even if you can't easily cross borders physically, make sure you don't settle down mentally. Stay culturally open and spiritually hungry, even if only via consuming cat memes from foreign parts of Twitter.