To Derp is to Die

In June 2013, Noah Smith officially defined the term "derp", which had been gaining currency in the economics blogosphere and on Twitter, as "the constant, repetitive reiteration of strong priors". For those unfamiliar with the term "prior" (which is a technical term in Bayesian statistics), the definition simply states that to derp is to respond to new information by restating your most basic beliefs, usually very forcefully in the form of pet slogans or catchphrases, instead of thoughtfully updating your beliefs.  Rather appropriately, when I first encountered the term, I didn't like it, but then I reconsidered and decided I really liked it. On the Internet, to derp is to die (even though it can get you lots of followers, you die intellectually). So here is a short introduction. 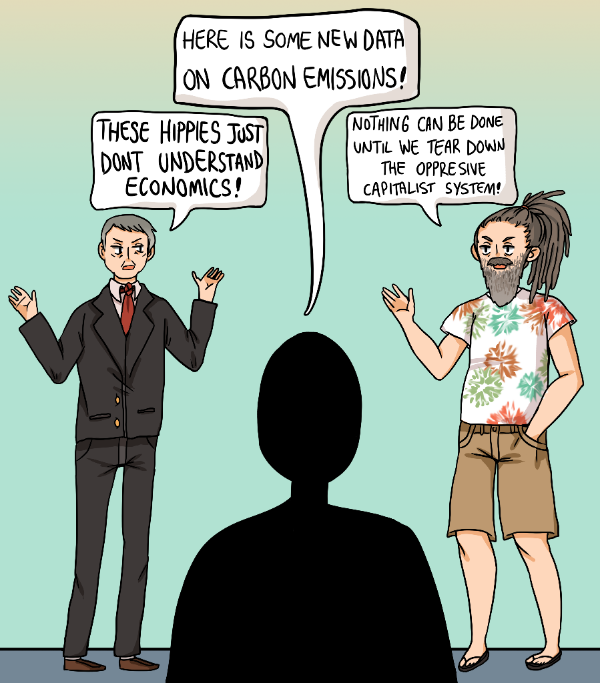 A derping guide for Left and Right. Illustration by Grace Witherell.

1/ Keynes famously asked, "When my information changes, I alter my conclusions. What do you do, sir?"

2/ For many people, the answer is, "I restate what I already believe more stridently." In other words, when the facts change, they derp.

3/ You derp, I derp, we all derp. It is a natural human tendency that requires conscious effort to correct. The cartoon illustrates an example.

4/ We derp because humans evolved in cultures of tribal honor and authority, where changing one's mind was a sign of weakness, insincerity or untrustworthiness.

5/ To openly change your mind in such cultures is to admit that you are not omniscient and/or infallible. You don't know everything already. You make mistakes.

6/ Tribal cultures have many great features: they create solidarity and loyalty, provide meaning and motivation, inspire courage for war.

7/ But the great weakness of tribal cultures is that by default they are closed to new information, their honor secure behind a Great Wall of Derp.

8/ In a culture of tribal derping, you decide who your friends are, who your enemies are, and adopt unshakeable beliefs accordingly.

9/ In a tribal world of timeless sacred beliefs, where new information is profane by default, to change your mind is to betray your tribe.

10/ Derping is a degenerate form of motivated reasoning, where you don't even bother looking for confirmatory evidence. You just repeat yourself.

11/ Though most derping is tribal in nature -- think partisan politics and economic ideologies -- individuals can derp too.

12/ Individuals derp to protect their fragile psyches, preserve momentum in behavior and protect sunk costs in an uncertain world.

13/ Often the cause is a particular sort of trauma that scabs over. The original wound is often protected because it is a source of energy.

14/ It is easier to spot derping in others. The easiest response is to simply disengage. You will lose little since derpers rarely say anything new.

15/ It is harder to spot derping in yourself. One thing to watch out for is words and phrases that you find yourself repeating too much.

16/ A favored word or phrase is often the building block of derp. A heavily used and unexamined blackbox of beliefs that must be protected.

17/ To get out of the habit of derping, you can do two things: practice changing your mind in public and practice contingent reasoning.

18/ Changing your mind publicly -- on social media, emails or meetings -- will show you that people actually appreciate it. We are not Stone Age tribals.

19/ This does not mean a public confessional mode where you use your mind-changings as an excuse to masochistically debase yourself continuously.

20/ Contingent reasoning -- working with if-then assertions that have a finite scope rather than absolute, unqualified assertions -- is like insurance against changing facts.

21/ This does not mean slipping into weasel mode where you hem and haw about everything to avoid making decisions or acting.

22/ Changing your mind ultimately means steering your actions, not avoiding action. Derpers get stuck in a rut. Mind-changers can maneuver.

23/ When software eats the world, information is food, and derping is fundamentally an inability to eat. This means derping is death.

24/ In the short term, derping is a way to win friends, keep up your motivation and "getting things done" momentum. In the long term it is death.

25/ So dare to put truth above tribalism. Dare to sacrifice momentum and ignore sunk costs when new salient facts emerge.

26/ When the facts change, change your mind. Say no to derping. Live long and prosper.