Today's newsletter is inspired by my friend Kim Malone Scott's new book Radical Candor, due out next week (preorder here). In it, she argues that the job of the modern manager is to artfully combine direct truth-telling with sincere, personal caring. She lays out a model (based on the excellent 2x2 below) to help you recognize that that is in fact your job as a boss, and doing it well. I had the opportunity to provide feedback on an early draft of the book, and have also been using her model in my own consulting work for over a year now. It's not just been uniformly well-received by both seasoned senior executives and new managers, but is among the top 2-3 most popular frameworks among the dozens I have clients try on for size. So this is an endorsement that comes with both skin in the game and independent testing so to speak.

Radical Candor is an important book because it correctly identifies the core competency of the modern manager in 2017. The radically candid manager is in a sense the last manager: the core role that has emerged as the enduring one, after four decades of brutal unbundling of management as a function. Organizations that recognize this manage to combine the efficiencies that result from unbundling the manager with deep and growing reserves of internal cultural capital and effectiveness. Those that don't end up as toxic shitshows of the sort we've seen revealed at Uber over the last couple of weeks. So this is actually important, makes-or-breaks-the-organization stuff. But let's talk about the big story, within which radical candor is one of the final chapters: the unbundling of the manager. 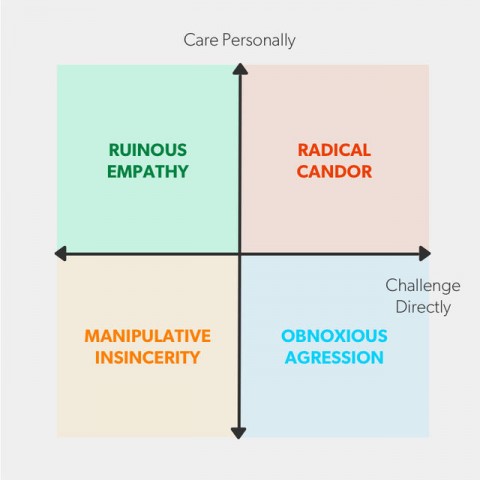 1/ In the 1950s, the rise of a new kind of manager over the previous half-century, the middle manager, inspired a whole era of management thinking and writing.

2/ Alfred Chandler, Peter Drucker, and William Whyte were among those whose writings (still valuable 60+ years later) were inspired by this curious new species.

3/ The middle manager -- somebody who manages other managers, but isn't the owner/leader or CEO -- is the sine qua non of the no-skin-in-the-game industrial age ethos.

4/ They do not bear responsibility either for the work getting done, or for the ultimate aims of the organization being attained. That does not mean, however, that they are useless.

5/ The middle manager evolved to occupy a niche: providing a lot of middleware support and coordination required in large-scale organizations.

6/ That niche, however, began shrinking in the late 70s. Since that time, a gradual process of unbundling middle-management functions has been underway.

7/ Many of the pathologies of hierarchical command-and-control organizations arise not from the structure itself, but from the existence of unaccountable middle layers.

8/ Unlike the bottom layers with direct responsibility for getting work done, middle layers are not responsible for immediate consequences.

9/ Unlike the top layers, with accountability to stakeholders and overall organizational performance, middle layers are not responsible for ultimate consequences.

10/ This is a structural position rife with moral hazard. There is a principal-agent problem/no-skin-in-game issue in relation to both the top and bottom of the pyramid.

11/ But the role has not always been vacuous, even though it often is now. A lot of routine logistics, information dissemination, and large-scale coordination used to depend on it.

12/ Over the last 40 years, a great many middle-management functions have been refactored into other functions, automated, outsourced, or simply done away with.

13/ You can think of four broad phases, each taking about ten years, and each concerned with a core unbundling principle: autonomy, efficiency, innovation, and _empathy. _

13/ You can read about the autonomy phase (1975-85)  in books like Tom Peters' Thriving on Chaos, which was the first management book I read as a teenager.

14/ Much of what he wrote about the era of "flattening" organizations is conventional wisdom today, but back then the core idea seemed really radical: trust the individual.

15/ The result of that early era was simply fewer managers, in fewer layers, and most importantly, more autonomous individual contributors, at least at skilled levels.

16/ Peters' ideas came out of a long tradition of people arguing that workers could be trusted rather than treated like convicted felons. McGregor's Theory X/Theory Y (1960s) was an early part of it.

17/ After autonomy, the focus shifted to efficiency (1985-95). This led to the global spread of Japanese ideas, with much of the impact being on the factory floor.

18/ The impact on managers -- a focus on process discipline, monitoring and feedback, is captured in Andy Grove's classic High Output Management (1983).

19/ Autonomy+efficiency in an environment of deregulation and computerization meant "bad management" was solved in a specific way: elimination, automation and outsourcing.

20/ Many middle-managerial functions such as signing off on routine paperwork or disseminating information, were simply computerized or networked away.

21/ Other functions were downcycled: it was recognized that many functions weren't really "management" work, and outsourced to lower-cost non-manager workers, often in other countries.

22/ Matrix management, value-chain optimization, and process re-engineering marked the later stages of this era: broadly, the era of process discipline.

25/ Managers began to be held accountable for end-to-end value addition rather than just the internal silo-functioning metrics, setting the stage for the "innovation" era.

26/ By 1995 the stage was set for the "innovation" phase. Fueled by books such as The Innovator's Dilemma (1997), the surviving middle managers turned into risk managers.

27/ The timing was perfect, since the rise of the Internet shifted the entire economy into an innovate-or-die/software-eating-the-world gear.

32/ Obedient, docile employees turned into autonomous, authority-challenging nightmares for bosses who might jump or be reassigned to competing projects anytime.

33/ Autonomy meant that what used to be "rank insubordination" was now "effectiveness." In an environment of competing internal projects, loyalties became  uncertain.

34/ Efficiency meant that scrutiny of costs and performance turned brutal (if not always particularly effective). Except on Wall Street, work stopped being a bacchanalian party.

35/ The focus on innovation meant the static peacetime construct of "job description" transformed into constant maneuvering against shifting internal/external competition.

36/ Instead of attracting admiration and envy, bragging about the size of your organization  attracted unwanted disruptive innovation from both internal and external competitors.

37/ Chet Richards' Certain to Win (another top recommendation of mine that I use all the time), captures this last management-as-innovation-maneuvering aspect.

38/ Much of my own writing in the past decade, particularly The Gervais Principle and Be Slightly Evil, is about surviving/thriving in the idyllic-villages-turned-dangerous jungles.

39/ Like many Gen Xers in their early 40s, I am a product of the first three phases, spanning 30 years, of the long-term unbundling of the manager.

40/ Thinking in terms of autonomy, efficiency and innovation is so instinctively natural for me, and distaste for the 70s fat-cat managers so ingrained, I can't think any other way.

41/ Which means this "native" way of thinking comes with some big blindspots I share with others of my generation, which 70s-era managers would have recognized.

42/ The biggest blindspot has to do with the role of caring in management. This is where Kim's challenge directly versus care personally 2x2 comes in.

43/ Pre-80s managers could be paternalistic in the sense of caring, in part because the overall inefficiency and conflict-averse consensus culture of the economy made it cheap to care.

44/ So 1970s style managerial caring was usually not accompanied by candor and direct challenging. Workplaces were dominantly in Kim's top-left quadrant: ruinous empathy.

45/ The effect of the first three phases of the unbundling of managers was that a lot of managers, if they survived at all, shifted into one of the two lower quadrants.

46/ Many shifted into manipulative insincerity, looking out for themselves at the expense of others, in the classic 1980s-douchebag mode, now a cultural trope.

47/ Many shifted into obnoxious aggression, turning into stress-inducing internal cancers, short-term effectiveness being paid for with long-term damage.

48/ After 30 years of unbundling the manager, a lot of the behavioral mass concentrated in "ruinous empathy" got redistributed into these other two quadrants, even as it shrank.

49/ The result, on the eve of the crash of 2008, was a corporate world with a deep deficit of caring, with or without strong cultures of truth-telling. Then the crash happened.

50/ A big part of the Great Recession was that "caring debt" had come due. We were paying the costs of an economy based on manipulative insincerity and obnoxious aggression.

51/ These are not the same as an economy or company grounded in truth-telling. It is just a culture of the strong exploiting the weak while being indifferent to the truth or effectiveness.

52/ The public sector was no better. The parts gutted by deregulation succumbed to the same pathologies as the private sector. The left-behind part doubled down on ruinous empathy.

53/ Silicon Valley was not immune to this broader shift. In the valley, people began deluding themselves that nice buffets and beanbag chairs were "culture" and stock options a substitute for "caring."

54/ Across the board, Silicon Valley companies joined the great party of accumulating caring debt, except with nicer perks.

55/ In society, more broadly, politics too succumbed to the same forces that had created the caring deficit in the private sector.

56/ A party based on ruinous empathy -- the tendency to cloak important truths in "PC" and hypocrisy -- lost to one that specializing in obnoxious aggression and manipulative insincerity.

57/ What was lost across the board, at all levels from Washington DC to the Uber, poster-child for software eating the world, was a culture of caring without sacrificing truth-telling.

58/  This is not a nice-to-have feature of society. A society can create meaning and be worth living in only if individuals actually sincerely care about each other and show it.

60/ What can you do about it? Buffets and expensive sweatshirts aren't the answer. The answer is the grounding the key 1:1 relationships of society in radical candor.

61/ How do you do that? Well for starters, read Kim's book. It offers a playbook for building culture at the locus that actually counts: healthy 1:1 relationships, not buffets. And check out my interview with her last year.

62/ If you recognize that the core managerial function left, after all the unbundling, is to simply care personally and challenge directly, you will help build institutions that endure.

63/ If you don't? Well, they only question is which sort of drama of cancerous destruction you will be part of: obnoxious aggression, manipulative insincerity, or ruinous empathy.

_Feel free to forward this newsletter on email and share it via the social media buttons below. You can check out the archives here. First-timers can subscribe to the newsletter here. _