A bandwagon effect is when people do something primarily because other people are doing it. This imitative tendency can drive both real wealth creation and bubble-like phenomena disconnected from wealth creation. In Silicon Valley, both good and bad bandwagon effects can be found yoked to unicorns: startups valued at over a billion dollars. For a tiny minority, the question is whether to become part of the unicorn itself. For the vast majority though, especially outside of Silicon Valley, the question is whether to jump on the bandwagon being dragged behind it. 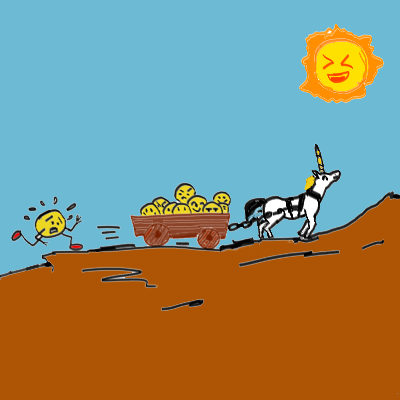 A unicorn-drawn bandwagon, circa February 2016

1/ In Silicon Valley a unicorn is a fast-growing startup valued at over a billion dollars. A true unicorn can be expected to make a few hundred people very wealthy, very quickly. Call this a unicorn effect.

2/ Anytime an arbitrary threshold like 1 billion turns into an influential anchor, people try to game it. In 2015, many startups tried to earn the unicorn badge by any means necessary.

3/ This included both ambitious efforts aimed at real growth and dubious valuation tricks, so naturally the relationship between unicorn status and actual wealth creation got muddied.

4/ By the end of 2015, as high-profile failures became public, "unicorn" started to become a dirty word. Now, in early 2016, the connotations are more negative than positive.

5/ The story of unicorns illustrates Goodhart's Law: "When a measure becomes a target, it ceases to be a good measure." The measure being the arbitrary 1B threshold in this case.

6/ That said, the basic idea that technology now allows a lot of wealth to be created very rapidly, via the highly leveraged work of very few, remains accurate.

7/ Those enjoying their moment of schadenfreude and preaching the virtues of slow, steady wealth creation are missing a genuine acceleration in economic dynamics.

9/ A bandwagon effect is when people do something primarily because others are doing it. It involves social proof, but unlike fashion, is not necessarily a purely social phenomenon.

10/ A bandwagon effect requires an avenue for broader opt-in participation, without strongly limiting gatekeeping factors like investment capital or employment offers at a unicorn.

11/ Today, more people can discover and participate in an opportunity, much more quickly, than 15 years ago. This means, bigger, quicker bandwagon effects.

13/ Bandwagons are often based on an opt-in, skill-gated "prosumer" behavior vector: a way to participate in production rather than being limited to a consumption role in a market.

14/ Consider VR. If you were an early employee of Oculus (acquired by Facebook), you were part of a unicorn, and are already rich.

15/ If you're part of the general consumer base, you might buy a VR headset at some point and enjoy gaming with friends once network effects kick in, which will happen in the next few years.

16/ Somewhere in between are the bandwagon people. The thousands worldwide experimenting with VR in the ecosystems of the pioneering companies like Oculus right now.

17/ Unlike beneficiaries of unicorn effects, they don't expect huge wins. But they do expect to gain more than pure consumers. They are part of a collective invention setting.

18/ Bandwagons are easy to spot. Today we have VR, blockchain, synthetic biology and drones among others. Each bandwagon sector has one or more unicorns in the fray.

19/ Bandwagon effects get a bad rap simply because they are based on social proof and imitation of others rather than original thinking.

20/ But when the original behavior being mirrored is sound, a bandwagon opportunity is very real -- up to a point. You get in while expected returns are still high but risks and entry costs have fallen sharply.

21/ Like the children's game of "telephone" or repeated copying of copies, noise degrades the core valuable information driving a bandwagon effect. And of course there are increasing supply effects as well.

22/ And of course, a bandwagon effect can be based on false original premises, so there is always a risk of the bandwagon suddenly turning into a house of cards, if you'll pardon the mixed metaphor.

23/ Ironically, one of the major bandwagons of today, the blockchain, mirrors this dynamic in its very architecture, with competing chains of "blocks" being transaction verification bandwagons.

24/ In the best case, a bandwagon effect, with sound original premises and low-noise imitation by a population in which poseurs are easy to tell apart, can create huge wealth amplifying effects.

26/ That said, bandwagon effects are accompanied by what I like to call bandwagon defects even in the best case.

27/ A bandwagon defect happens when the rapid gain in momentum of a bandwagon tempts you into thinking you are properly positioned to participate when you are not.

28/ If you aren't a bum, chances are you're busy with your own projects at any given time. When a new bandwagon appears you have to decide whether your mix of skills and sunk costs justifies jumping on board.

29/ In general the answer is no. It is much smarter to play to your strengths and realize returns from your sunk costs than to jump on a bandwagon.

30/ If you're one of the top upcoming concert violinists in the world, on the cusp of major success, you probably shouldn't throw it all away to become a mediocre 3D modeler for a mediocre VR startup.

31/ The only bandwagon I've ever timed smartly is blogging. 2007 was a great time to get in the game, and I had the right skills and life situation. But I have no regrets about the dozens of high-value bandwagons I've "missed".

32/ That said, even though it doesn't matter if you miss (or decide to ignore) a specific bandwagon, you can't afford to miss or ignore all of them in the 30 odd years of adult life during which you have a capacity to jump on one.

33/ It may sound romantic and courageous to follow the beat of your own drum all the time, and seek to become an original pioneer who creates a bandwagon rather than jumping on one.

34/ But really, that's a kind of precious-snowflake self-importance. The chance that you'll be the next Steve Jobs are infinitesimal. But the chance that the app bandwagon is right for you is somewhat higher.

35/ Equally, if you refuse to jump onto any of the 20-30 bandwagons that are likely to pass by between ages of 15-40, claiming you just want a simple hard-working life without speculative bets, you're likely headed for financial ruin.

37/ So in summary, create or join a unicorn if you happen to be in that rare 1% opportunity situation. Keep an eye on all bandwagons that pass by, and try jumping on at least 1 in 10. That's basically career strategy in 2016.