When Business As Usual Ends

A few years ago, in 2012, I wrote a post that proved to be one of my more enduringly popular ones, Welcome to the Future Nauseous. In it, I introduced the concept of a manufactured normalcy field. The thesis was simple (and hopefully intuitive): we are always in the grips of uncontrolled evolutionary change unfolding at a nauseating and volatile pace, but we manage to construct a "normalcy field" around our lives to help us create an illusion of stable equilibrium. But when the accumulated stress of unaccommodated change gets to be too much, the normalcy field collapses, and we experience this as anxiety-provoking "weirding" of normalcy.

A couple of days ago, I sketched out an application of this idea to the concept of "business as usual," and how it is falling apart under the stress of the Great Weirding, in a live tweetstorm that proved pretty popular. So here is a cleaned up, fleshed-out version, complete with a real 4-panel comic strip, featuring my famous characters, stick figure, stick figure, and everybody's favorite, stick figure. 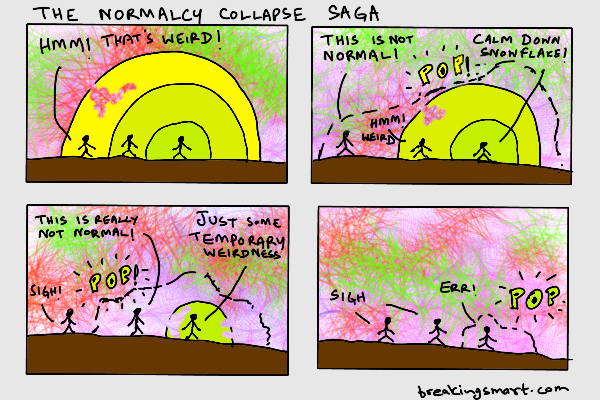 1/ Until a couple of months ago, people were commenting that the market was not pricing in political risk correctly (or at all), and arguing that the very idea of pricing in such foundational risks was meaningless.

2/ Takes like that are mostly a matter of opinion of course, since it's hard to tell whether an emergent market non-response to events is a systemic blindness or an inscrutable judgment of unimportance by the Efficient Market God.

3/ Still, recent events, such as the return of volatility to the US stock market, and clear market reactions to  Trump's trade wars and attacks on businesses, have at least moved beyond an emergent "no comment".

4/ My interpretation is that the market is finally waking up (two years into Great Weirding) and doing what looks like pricing political risk. The spell of surrealism has been broken.

5/ I've noticed a similar delayed reaction in my consulting: management cultures inside organizations don't seem to be factoring in the new political environment correctly (or at all).

6/ It has felt surreal, having the same old organizational psychology/software-eats-world/innovation conversations like nothing's changed, like violins being played on the deck of the sinking Titanic.

7/ In the market, the impact finally became visible as volatility returned after a year or more of preternatural calm. In business, in most sectors, the calm continues. But it is non-response, not hidden strategic preparation.

8/ We've been saying "normal is over" for a while now, but the process isn't actually all-at-once. This can be understood in terms of nested normalcy fields: constructed equilibrium illusions within change processes.

9/ Normalcy collapse is like a big bubble collapsing onto smaller ones, which then collapse further. All the way down until individual bubbles collapse. I wrote about normalcy fields in Welcome to the Future Nauseous

10/ When the top-level bubble collapsed in mid-2016, it was theoretical to most people inhabiting institutional realities that offered a secondary normalcy field inside the bigger ones.

11/ But people in the institutional "outdoors" (like free agents) felt it instantly. I personally felt a palpable new note of caution entering business conversations. A "don't make any sudden movements" subtext, and I don't think it was all in my head.

13/ Then the "market" which is a First Reality for many powerful people adjacent to the political center-stage, finally began producing non-degenerate responses to political events (degeneracy is when there is insufficient information in a system's state to determine the causes creating it).

14/ But most businesses outside the main active fronts in the culture wars have so far managed to preserve their tightest normalcy field. If you're not in businesses like steel, coal, renewables, it is still Business As Usual.

15/ The Weirding is something that is happening in Other Places to Other People working in Other Businesses. It's a spectator sport for the rest.

16/ So one thing I'm thinking a lot about these days is: what happens when the normalcy collapse sequence finally hits the general business environment? How will the surrealism break down?

17/ How will "business-as-usual" normalcy fields collapse? How can you respond to the collapse? As you might guess, these are the core questions I'm working on for Breaking Smart Season 2 essays.

18/ To be clear, I'm not talking about systemic collapse or apocalyptic scenarios. Normalcy collapse is a descending, paralysis-inducing sense of weirdness; an internal mental collapse that can lead to external, physical collapse if not checked.

19/ And further, this FUD (fear-uncertainty-doubt) is decades of systemic change imperative debts coming due, not a case of Trumpist forces getting inside the decision cycle of the world via some 9-dimensional adversarial chess.

20/ This makes adaptation harder, not easier. If only the problem were simply a matter of smart adversaries getting inside our collective heads and messing up our thinking. You could hold out hope of outthinking them in the future.

21/ But you can't outthink evolutionary debts. Even if the dreams of Democrats in the US come true and they sweep the 2018 congressional elections and retake the White House in 2020 with an establishment centrist candidate, the normalcy collapse is past reversal now.

23/ What happens when your customer modeling and market segmentation has to dump (say) the Claritas PRIZM persona model for post-FB-scandal culture-war battlefield map? How does your marketing change?

24/ In HR, "culture" used to be anodyne conversations about scripting cosmetic gestures comprising mostly harmless signals. Now it is battle-planning in a weaponized environment of harassment and bias allegations, and endemic internal tribal conflict.

25/ The normalcy collapse has also hit outbound PR. We are no longer in boilerplate press release world where the worst case was your media messaging being ignored and the best case was an innocent viral meme.

27/ And deeper business activities aren't immune either. You can expect code, engineering design data, and private conversations to leak.

28/ You can expect hostile teardowns of products, forensic IP investigations, and regulatory demands for justifiable AI. You can expect tell-all blog posts and books from former employees and a fraying of a culture of enforceable contracts.

29/ Nothing is sacred, everything is up for discussion at all levels, privacy assumptions are calculated risks, and the courts and law enforcement are no longer reliable backstops for disputes as they get politicized, overwhelmed, and defanged.

30/ Apply the same question to every other aspect of business normalcy and you can see why I think business cultures haven't factored in the environment, 2 years in. They're mostly living in a simulated reality on an inactive reality fork.

31/ When that normalcy finally crashes, I predict an entire 70-year old post-world-war 2 management culture will go down in flames with it. And with it, all the hard-earned environmental efficiencies that make up a healthy business environment.

32/ People don't realize this, but underneath the MBA jokes, modern management is actually an accumulated 70 year old praxis based on a set of unconscious first-principles-of-culture.

33/ All modern management thinking, good or bad, rests on key political-economy assumptions laid down in the years immediately after World War 2, with one serious update during the 80s.

34/ The latest faddish business book doesn't exist in isolation. It is part of what Walter Kiechel called a "literary industrial complex" knowledge stack going back to Peter Drucker and Alfred Chandler in the 50s.

35/ This stack is what MBA programs teach, and what big companies model in their very bones. Whether you learn it in texts or through osmosis at your first job, it's a "way of doing business" that's a deep cultural skill/competence.

36/ Just visit a developing world business environment if you aren't convinced this "business normalcy field" exists. The absence will be palpable. It will feel chaotic.

37/ You may think of it as crappy/medieval developing country culture of corruption, or unprofessionalism, or runaway bureaucracy, but it's a missing normalcy field. Normalcy isn't a natural thing, it has to be constructed and actively maintained.

38/ This business-as-usual normalcy-field is in fact the greatest economic asset that separates developed and developing/third-world economies. It's an operating system that carries 80% of the intelligence of running a thriving, wealthy economy.

39/ When this field is absent because it never emerged, or once existed but has collapsed, business feels like a bunch of random, anarchic, inefficient, messy hack activity that is low-yield, borderline criminal, and produces little wealth.

40/ My point is this: as and when this field finally starts to collapse, the business world will be at a fork in the road: collapse into developing country state, or reinvent management knowledge on a new assumptions stack that reflect the post-Great-Weirding conditions.

41/ This has been, uhh, an extended informercial for the thinking/writing I'm doing now: figuring out the new assumptions stack businesses and other organizations should be using :D. Stay tuned for more in the Season 2 essays.

42/ And of course, I'm not the only one thinking of these matters. You might enjoy this related tweetstorm by David Chapman that examines what's happening from a more cultural angle.