When is an exit not an exit?

I don't normally do hot takes, but his is more of a cold take on an important breaking-smart theme that happens to have a hot example brewing right now. Especially since last week's guest issue from Steven Moody provided a frontlines take on the opportunities created by the Internet for global economic and political mobility. So let's talk about #brexit which seems to many like a step in the other direction. Is the outcome a case of breaking smart or breaking bad? What does it mean for software eating the world? What does it mean for the future of democracy? What does it mean for the idea, popular among libertarian-leaning breaking-smart types, that political exits are always good news? 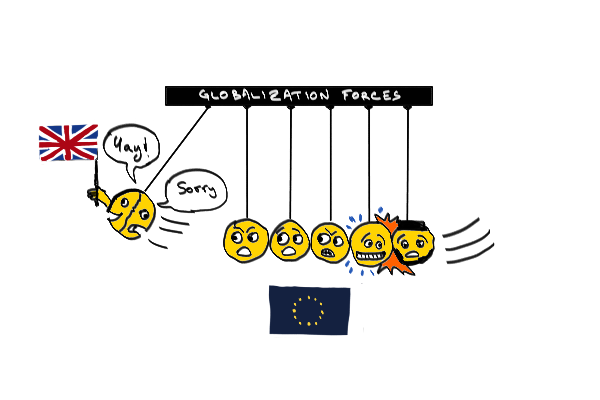 2/ The idea, a political analogue to the notion of opt-in staffing of software projects, is that one can simply leave ("fork away") from a situation one does not like, instead of voicing dissent.

3/ Larry Page once proposed an unregulated "exit" geographic zone for experimentation. Libertarian idealists tried, and were burned by, the disastrous Galt Gulch exit experiment in Chile.

4/ The troubled Honduras charter city project has been attempting to try out the law of two feet exit principle at the level of a city, an idea many want to see tested more thoroughly.

5/ Most famously, Balaji Srinivasan proposed exit as a mechanism ("soft" exit to the cloud or "hard" exit in geography) for greater innovation and economic dynamism, causing an angry backlash.

6/ When technologists and economists talk of exit in positive terms, they mean it as a mechanism to create environments of greater competitive vigor and free choice for individuals. Not things like #brexit.

7/ But like it or not, exit has always operated as an ideology-agnostic mechanism, through migration, secession, and corporate decisions (such as the Uber/Lyft decision to pull out of Austin).

9/ Capital flight is exit at a financial level. Apostasy (punishable by death in conservative Islam) is ideological exit.

10/ Corporate multinationalism is effectively exit of the global order of nation states through regulatory arbitrage: "law of two feet" for corporations (it is already a charter city world for corporations)

11/ Here is the thing though: how do you reconcile exit philosophies with the increasingly intricate patterns of mutual inter-dependency through increasing globalization?

12/ What does it mean to "exit" when you depend on container-shipping supply chains everywhere, need global bond markets, and foreign trade to survive?

13/ What does it mean when you need the Internet (almost all of which is physically controlled by nation states) and Intel/ARM powered devices (manufactured in big nation states)?

14/ What does it mean when flag-of-convenience nations like Panama play critical roles in both global finance and industries like container shipping?

16/ At the very least, the philosophy of exit needs to be distinguished from naive isolationism to accommodate the realities of global interdependency and its ideology-agnostic availability to all.

17/ In the worst case, exit philosophies could be delusional or hypocritical: pure posturing rooted in denial of dependencies and/or responsibilities that you cannot actually walk away from.

18/ An exit that polices passports but not globalized flows of money or goods is not really an exit. A deadbeat dad walking away from his family is not an exit.

19/ A child left behind by a deadbeat dad is not choosing to "exit." A poor person who has her life destroyed by the machinations of corrupt cronyists and is "left behind" by "progress" is not "exiting."

20/ The hypocrisy is easy to spot: people who were upset that elites overruled "Boaty McBoatface" are now clamoring for elites to somehow overturn the #brexit vote.

21/ In the last 24 hours, several of my friends have been very angry about the #brexit outcome, some to the point of questioning democratic mechanisms.

22/ The #brexit decision can be viewed through many lenses: young versus old, nativists vs. pro-immigration types, London, Scotland and Northern Ireland versus "traditional" England.

23/ Some are calling the decision an avoidable consequence of an unnecessary referendum promised for expedient reasons, driven by angry old racists who are acting out of fear/resentment of East European and Syrian immigrants.

24/ Others -- and I am in this camp -- see it as just another piece of evidence that exit politics is here to stay, whether or not you like individual outcomes. That the details could have differed doesn't matter.

25/ Coulda, shoulda thinking is moot. There is a global megatrend towards greater, and more sophisticated, use of exit mechanisms in politics (Hirschman notes that economics has traditionally been exit-biased, and politics voice-biased. This is getting less true by the minute).

26/ In a democracy, reactionaries have as much right and access to exit mechanisms as progressives. There are good reasons to have doubts about democracy, but this is not one of them.

27/ Just because sometimes people YOU see as stupid, regressive, deceitful and misinformed win more votes does not mean the mechanism is broken. They see it the same way when your side wins.

28/ To paraphrase what my poker-playing friends tell me, democracy is the best (or least-worst as Churchill said) technique for rational play, even if you lose specific hands. Politics, like poker, is a game with uncertainty and ambiguity.

29/ And here I mean real democracy -- complete with patronage, corruption, vote-banks, fraud, clientelism and cronyism. It is still better than the alternatives.

30/ In its own messy way, democracy is evolving. Soon we may see experiments with charter cities that actually work out, and individuals gaining as much mobility as corporations.

32/ Democracy is not a static abstraction. It has been evolving for thousands of years and will continue to do so. Try the works of Francis Fukuyama to appreciate the context better.

33/ From the narrow perspective of impact on the struggling and rather idealistic experiment that is the European Union, #brexit seems like a disaster to liberal elites with globalized sensibilities.

34/ But look at the upside: the UK has now demonstrated through TWO largely peaceful votes that democracy -- a voice-biased technology -- can evolve to handle exit decisions.

35/ In sharp contrast, look at the blood and messiness of political exit events in the past, right up to and including Syrian refugees fleeing ISIS and Assad today.

36/ The "exit" of Pakistan from pre-independence India caused a million deaths in 1947. One politician was sadly killed in the run-up to #brexit. That's progress.

37/ The exit of Bangladesh (then East Pakistan) from Pakistan took a bloody war and insurgency in 1972.

38/ The breakup of the Soviet Union and the Eastern Bloc -- an en masse exit event -- in 1989-93 was an ugly mess that sprawled across two continents.

39/ Within this broader context, #brexit seems like a remarkably civilized way to handle an exit decision. Political exit, unlike switching toothpaste brands, takes blood by default. It shouldn't.

40/ What will happen? We don't know. My suspicion -- as illustrated in the cartoon -- is that globalization forces are too strong for the exit to be as meaningful as "leave" voters hope.

41/ It is a symbolic, somewhat futile act of reactionary defiance. Because paradoxically, even as the world is getting vastly more exit-friendly, it is getting more deeply integrated.

42/ Globalization is of course not irreversible. As the Wharton economist Stephen Kobrin has argued, globalization is cyclical, but with a secular trend towards greater integration.

43/ Globalization is in something of a recession now, but isolationist nationalism has become so weak that I suspect that the economic fate of the UK will remain strongly tied to the EU.

44/ That is not to say this is not an important development. There will be consequences. "Exit" in the form of the fruits fondly imagined by those who voted to leave just won't be one of them.

45/ So what have we learned here? We have learned that exit politics is here to stay, and we might as well get good at it.

46/ The key is to NOT succumb to doubts about the fundamental strength of democracy, and its roots in pluralism and expression of dissent through both exit and voice, available to all.

47/ A system based on uncoerced votes cast in mostly legitimate elections and money freely spent in mostly free markets beats anything else we've tried,

48/ Yes, in the short term things can seem to be going badly. It can seem to elites that the madness of populist elections and insanity of emotional markets means liberal democracy is broken.

49/ But in fact, it is working exactly as it is supposed to. The system just embodies a different kind of intelligence than the cerebral kind liberal-elite humans identify with.

50/ I'll leave you with a link to my ribbonfarm post from yesterday. Though I wasn't thinking about #brexit when I wrote it, it happens to be relevant.