Can You Disrupt Yourself?

Can you game Clayton Christensen's harsh theory of innovation, laid out in his 1997 classic The Innovator's Dilemma? In some ways, this is the most basic challenge in management (hence "dilemma"). Unfortunately, it remains unsolved nearly 20 years after it was first identified. But we know more now than we did, which is progress. 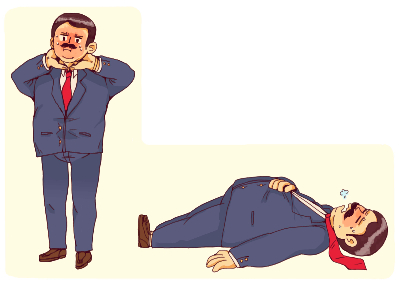 Self-disruption is like trying to choke yourself. You'll pass out before you die. Illustration by Grace Witherell.

1/ Clayton Christensen's theory of disruption has had an unsolved mystery at its core since it was proposed: is self-disruption possible?

2/ From hard disks and game consoles to phones and software, the theory gets validated in broad contours repeatedly, despite fussy nitpicks

4/ Since 1997, when The Innovator's Dilemma was published, Christensen himself has sought holy grail, a theory of self-disruption, in vain

5/ The null hypothesis is that self-disruption is like trying to choke yourself. You'll pass out before you manage to kill yourself.

6/ To make the metaphor precise, choking off the air supply to the brain (cash flow) will shut down the executive function (management support)

7/ Nevertheless, people continue to seek. Much consulting is based on the unproven premise that self-disruption is indeed possible.

8/ As a refresher, disruption is when a new competitor on the margins of a market wins by offering a simpler niche product

9/ Usually the product is within the nominal capabilities of the incumbent; disruptors are often even founded by ex-employees of incumbent

10/ The product is often (but not always) technologically incremental rather than radical. Or even a defeaturing of the incumbent product.

12/ Eventually the disruptor grows in capability sufficiently to target the old core, at which point it is too late for incumbent to fight

13/ The incumbent shrinks and retreats upmarket, as more and more customers closer to the core switch to the disruptor.

14/ The psychology is key: core customers expect loyalty from incumbent, but offer little loyalty in turn, switching at convenient time

16/ For the ones that do, it is "first you compromise, then you radicalize, then you kill you babies, then you lose."

19/ Stage 3, kill babies: The potential self-disruptor product demands more funding and executive attention than is available, it is killed

20/ Stage 4, then you lose: Even if a disruptor does not emerge, the core market goes into natural decline, with no new options

21/ In 3-4, fear of a *potential* top-line decline in core revenue kills options that could have saved the day when it *actually* happens

22/ There *is* a potential solution: predict and quantify potential topline losses and plan around them ahead of time, when you still can

23/ Example, if you suddenly change topic of an email newsletter, you will lose some readers, gain some, so do it when the list is growing

25/ This is a high entropy maneuver (what Boydians call a reorientation), you can execute it if you have potential energy to spare

26/ I know of no strong examples of this, but I think corporate maneuvering levers are emerging to enable this sort of thing.