I've been reading the suddenly retro-popular The Sovereign Individual (it's from 1999) based on multiple recommendations (verdict: mixed). In it I came across an Arthur C. Clarke idea, which I'm surprised I hadn't encountered already, that instantly made my top-5 list of wise ideas about the future. Clarke noted that there are two "hazards of forecasting": failure of nerve, and failure of imagination, and observed that the former was more common. As my 2x2 below suggests, it might have something to do with the fact that serious futurists, at least in the West, seem to lean politically left as a group, which makes them arguably more prone to failure of nerve than imagination.

As Q4 rolls around, and corporate forecasting season begins, I get an excuse to indulge my secret hobby of trying to invent psychohistory. This forecasting season, I suspect failure of nerve is going to be more of a problem than usual. I'll explain why and offer a couple of fixes. 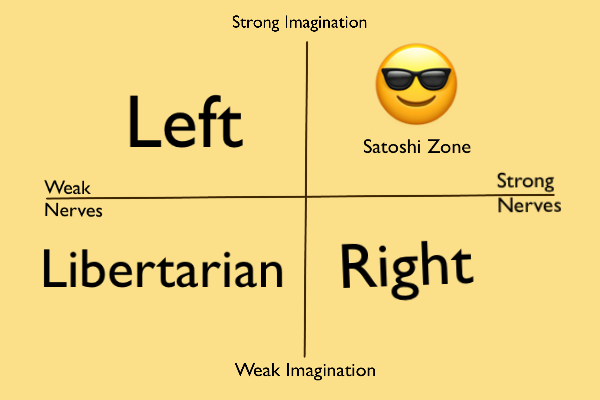 2/ Failure of imagination results in visions of the future that are weirdly impoverished in terms of the potential complexity, richness, and scale of future events.

3/ Weak imagination often shows up in a tendency to think in terms of extrapolated trends driving pet abstractions. A good example is "markets will solve everything."

4/ They may or may not, but thinking of the future in terms of the evolution of an abstraction conveniently saves you the trouble of imagining and acting on rich specifics.

5/ Weak nerves often show up as a tendency to think in terms of wishful human archetypes. Based on cartoon peacenik/warmonger archetypes for example.

6/ Thinking in terms of cartoon humans saves you the nerve-wracking business of anticipating a world where you might have to deal with more complicated people, not less.

7/ Failure of nerve results in visions that might be packed with imaginatively fleshed-out details, but feature cartoon heroes and villains (or "customers" and "CEOs" in the business world), rather than "people."

8/ A quick sniff test to figure out which failure mode is dominant is to compare the relative complexity of the imagined future world and the people in it.

9/ Good science fiction and futurist writings expand and bolster both nerve and imagination. And of course, powerful inventions embody both.

10/ One reason bad futurism and science fiction are attracted to dystopias is that dystopias generally require both less imagination and less nerve to think about. Cartoons in a cartoon land.

11/ Based on the Clarke idea, there are 3 ways to fail at forecasting, and 1 way to succeed, illustrated in the 2x2 above (weak/strong nerves, weak/strong imagination).

12/ The most common way to fail is to have a strong imagination, but weak nerves. In my experience the political left is particularly prone to this.

13/ The second way to fail is to have strong nerves, but weak imagination. In my experience, the political right is particularly prone to this.

14/ The third way to fail is to suffer from both weak nerves and imagination. Libertarians are particularly prone to this double failure on big picture stuff (they are often imaginative and/or strong-nerved in their individual lives).

15/ And finally the way to succeed: having both strong nerves and strong imagination. Bitcoin is both a highly imaginative invention and one that required nerves of steel.

16/ How do you get there? A recent post by Dan Wang, Definite Optimism as Human Capital (note: not the same as Thiel's determinate optimism), almost gets it right.

17/ Wang's post argues that simply imagining any positively defined future at all is a pre-condition to effective futurism. To imagine no future is to have no future.

18/ My first law of psychohistory ("humans need a future they can believe in") is the same idea. Basically, futures emerge at least in part via certain kinds of prophecies being self-fulfilling.

19/ But that's not enough. Wang's otherwise excellent post poses the right question (how to catalyze positive visions) but fails to find an answer because he focuses on imagination to the exclusion of nerve.

20/ Nerve is at least as important a dimension as imagination. Which means effective futurism is at least a two-dimensional problem problem at the highest level of abstraction.

23/ It's not a strict rule, but in navigating the evolving future, other (real) humans tend to test our nerves, while the rest of nature tends to test our imagination.

24/ Flipping it around, the worst futurism combines bottomless cynicism about technology with boundless optimism about humans ("Google makes us stupid but everybody can be a heroic programmer entrepreneur, yay!").

25/ This divide, incidentally, has caused a curious schism in my own work. I tend to explore tech optimism on breaking smart, and cynicism about humans on ribbonfarm.

26/ The main creative challenge I've set myself for the next few years is to integrate the two more seamlessly in my writing. It might even be the key to inventing psychohistory.

27/ Why is failure of nerve a particular challenge this forecasting season? Because we are in a global reactionary condition where strong-nerves/weak-imagination people are in charge.

28/ Possibly, this distinction is more fundamental than either left/right or authoritarian/libertarian. The mix of imagination and nerve at the top sets the overall tone of future narratives contending for attention.

29/ The nerves/imagination model maps roughly to the Pareto circulation of elites theory based on two kinds of elites: Lions and Foxes.

30/ The control of power by Lions at the top across the world has had a chilling effect on imagination, which means Foxes are in trouble. Their preferred mode of engaging the future is broken.

31/ This does not mean playing the game on Lion terms, but foxes do need stronger nerves in order to continue playing at all. Otherwise futurism degenerates into "how to resist Nazi Lions."

32/ What I've found to be effective is to consciously work on strengthening the nerves and watching the effects on how more imagination gets unleashed as a result.

33/ In practice, this boils down to a simple rule-of-thumb: to do good forecasting in Q4 2017, work on making the human archetypes in your thinking richer, more complex, less idealized, more cynical.

34/ Example: an idealist view of decentralization-by-blockchain is based on an idealized view of humans as all aspiring to autonomous individual sovereignty, and resisting nation-state authority.

35/ In practice, humans vary in the amount of received/exercised control and belonging they want in their power relationships with other humans/institutions. There's even a test for it (I score a boring medium; can't recall the name of the test).

36/ An attempt to forecast blockchain futures that assumes humans form a distribution in "decentralization desire" is stronger-nerved than one that imagines only the 2 extremes.

37/ It takes stronger nerves to think this way because it accepts the inevitability that the future will include all sorts, from people you like to people you hate, and everything in between.

38/ One way this played out in a recent conversation: I recommended to a client that they should apply a sort of "participation inequality" (the 90:9:1) rule in assumptions they make about how people will react to decentralization technologies

39/ The original rule states that in any social technology, you'll have 90% lurkers, 9% casual participants (such as liking/commenting), and 1% doing almost all the content generation.

40/ Mutatis mutandis, you can assume that when faced with decentralization technology, 90% will indulge in some sort of herd-like behavior, 9% will demonstrate a bit of individual autonomy,

41/ Only about 1% will act the way decentralization fetishists imagine all humans ought to behave, and will behave, by fully embracing all the potential to craft truly individualized sovereign lives.

42/ In another conversation, I recommended running climate change scenario narratives  through "Red" and "Blue" contexts for more effective output. Doing only one is weak-nerved.

43/ The general principle here is: come up with more of a "spread" in your assumptions about humans in forecasting. Don't anticipate the future of the world for just your tribe (or favorite enemy tribe)

45/ If you, like me, lean foxy, with stronger imagination than nerves, you'll notice thinking with a richer range of human types evokes scenarios that get on your nerves more.

47/ In an earlier newsletter, I recommend . Humans continuing to be human is the most inexorable trend in history, and the most enduring one.

48/ So adding more "nerve" to your prognostications involves accepting and acting on the assumption that you will continue to share the future with all sorts of people.

49/ But in your quest for more nerve, don't let your imagination start to fail. That's one path to ineffective radicalization (I suspect it's part of the explanation for the rise of antifa).

50/ To conclude, as Bizarro Spock might say in Bizarro Star Trek universe where he is Romulan instead of Vulcan, "Live strong-nerved and prosper." Here's wishing you a good forecasting season.

Bonus: since a bunch of you are inevitably going to email me asking for my list of top 5 wise ideas about the future are, here you go, in no particular order. I haven't thought this through much, but maybe I'll compile and rank a bigger list sometime. Email me if you have candidates to propose.

Speaking of the fourth one, incidentally, check out this great application of the idea of advanced technology as magic: Rodney Brooks' The Seven Deadly Sins of Predicting the Future of AI